The dumb Iowa steak fry: An omen for the horribly dull political year to come

Hundreds of reporters went to Iowa to watch Hillary Clinton pretend to cook steaks. Who's excited for 2015?? 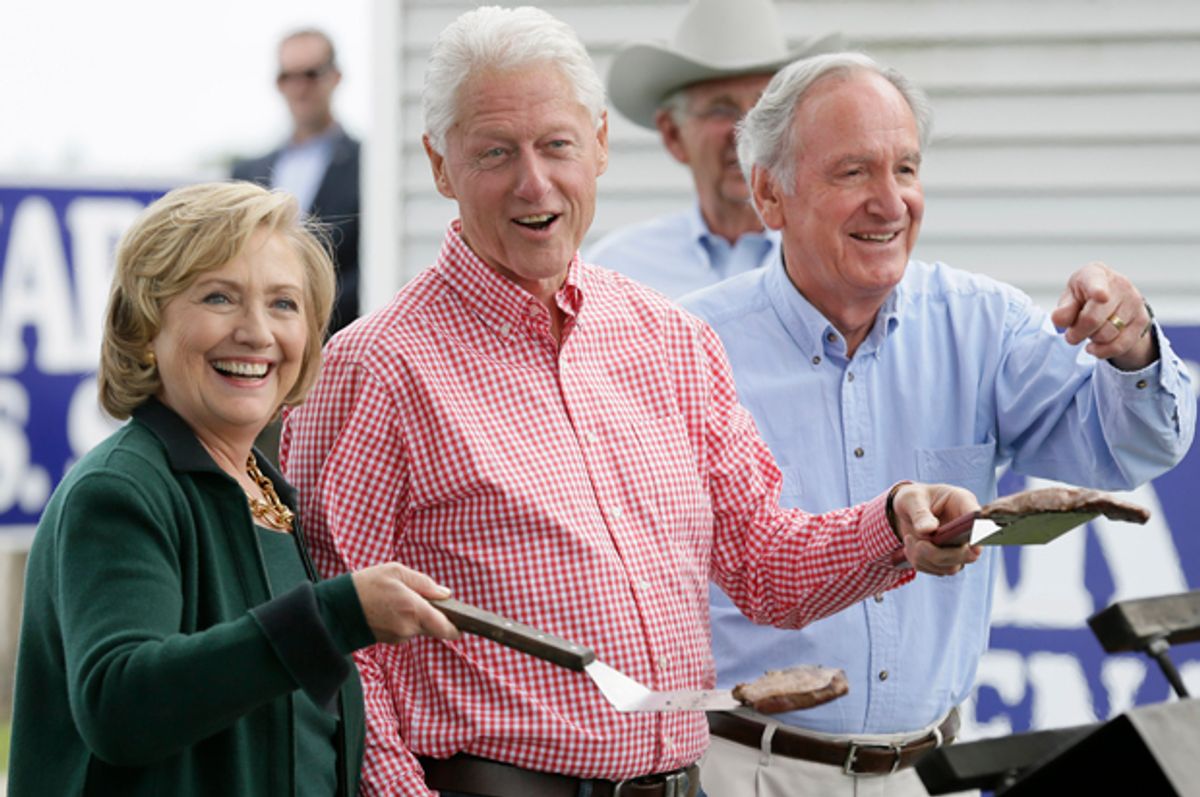 Sometimes during this midterm election cycle, in which a bunch of uninspiring, tightly programmed conservative Democrats are entrenched in grind-'em-out Senate campaigns against a roster of clown-head Republicans, it's hard to avoid thinking about the grander vistas of the 2016 presidential cycle set to begin early next year. That'll be a show, yes? Think of all the big-name candidates and the 10,000 or so funny debates and the opportunity for each party to consider its post-Obama future -- compared to the midterms, when the stakes are all about how annoying the next debt ceiling debate will be and whether President Obama can get some judges confirmed. Can we just vote today and skip ahead to 2015 already?

But the hope that some future political paradigm will be grander than the present one is almost always a mirage. And it's events like Tom Harkin's Steak Fry in Iowa this past weekend that remind us of that: that the entirety of electoral politics in 2015 will be about multimillionaire politicians going to Iowa to stand "in front of hay bales, an American flag and a John Deere tractor," to pretend to perform such uncontroversial feats of Americana such as cooking steaks.

Over 200 credentialed reporters visited Iowa this weekend to watch Hillary and Bill Clinton pretend to cook steaks for a couple of minutes. Look at them, in the picture, holding up those steaks. Securing this and similar photographs took a substantial bite out of many news outlets' budgets. We're being unfair -- they were also there to report on Hillary Clinton giving 15 minutes of bland remarks about how wealth inequality is bad, peppered with a not-wry knowing line or two about how she's considering running for president.

Naturally the only interesting, newsy blip from this otherwise depressing spectacle foreshadowing the next full calendar year of similarly depressing spectacles was the handiwork of attendees, not journalists. A few immigration activists met Clinton on the rope line where she was signing autographs to glean her opinion about President Obama's decision to delay executive action on deportations. It was a good and fair question, relating to a demographic that's rapidly becoming the backbone of the Democratic Party coalition, and yet the word "Yay!" somehow managed to be the most interesting of Hillary Clinton's three attempts to blow it off:

One woman asked her about President Obama’s decision to delay expected executive actions on immigration.

“Hello my name is Monica Reyes and I’m an Iowa DREAMer,” said the 23-year-old activist and senior at the University of Northern Iowa, using the term often employed for undocumented youth brought to the country as children.

Clinton gave an enthusiastic thumbs up and yelled “yay!”

Asked to give her thoughts on Obama’s decision, Clinton answered, “Well, I think we have to just keep working, can’t stop ever working.”

Cesar Vargas, the co-director of the Arizona-based Dream Action Coalition, then told Clinton the president had broken promises to the Latino community and asked if she supported his decision. Clinton ended the back and forth.

“Well, I think we have to elect more Democrats,” she said, before walking away.

Do watch the clip, unless you're worried that any more eye-rolling might cause permanent damage to your optic nerves.

"Morning Joe" co-host Joe Scarborough gave his HOT TAKE ON THE STEAK FRY on MSNBC today. He crafted a strange argument about how Hillary Clinton and Jeb Bush need to declare their presidential candidacies right now to stop ISIS and unemployment, or something. But in service of that weird thesis, he actually made a fair, if obvious, observation about Hillary Clinton:

“This,” Scarborough went on, “is Hillary Clinton’s problem for people that know her and like her — like I know her and like her. She puts on that political hat and then she’s a robot; and she goes through the motions, she doesn’t ever reveal herself, she didn’t do it against Barack Obama, that’s why she lost in 2008. And it wasn’t until her back was against the wall that she had to stop acting like a robot on the campaign trail and start acting like herself that she started winning.”

What's sad about this video, and the several hundred similar videos that are likely to come in the next year or so, is that Hillary Clinton's "robotic" allergy to spontaneity on the trail was probably the right political move. There will be no talent like Barack Obama running against her in the next presidential race. Her 2008 strategy of inevitability and running out the clock while avoiding potential moments of discord may actually work in 2016.

The dominant coverage of Democratic Party politics in 2015 will be about one person jaunting between a handful of states to pretend to cook steaks, look at bales of hay and tractors, eat questionable fried food items, examine the flaky wood paneling of local party meeting rooms, and so forth. The 2014 election cycle isn't exactly one that will be remembered for sparking the imaginations of today's politically aspirational youth. But it may look like friggin' 1968 compared to the first leg of the next Democratic presidential nominating process.