Rosie fights with Nicolle Wallace over, of all things, Kanye's 2005 remarks. Is this the news? 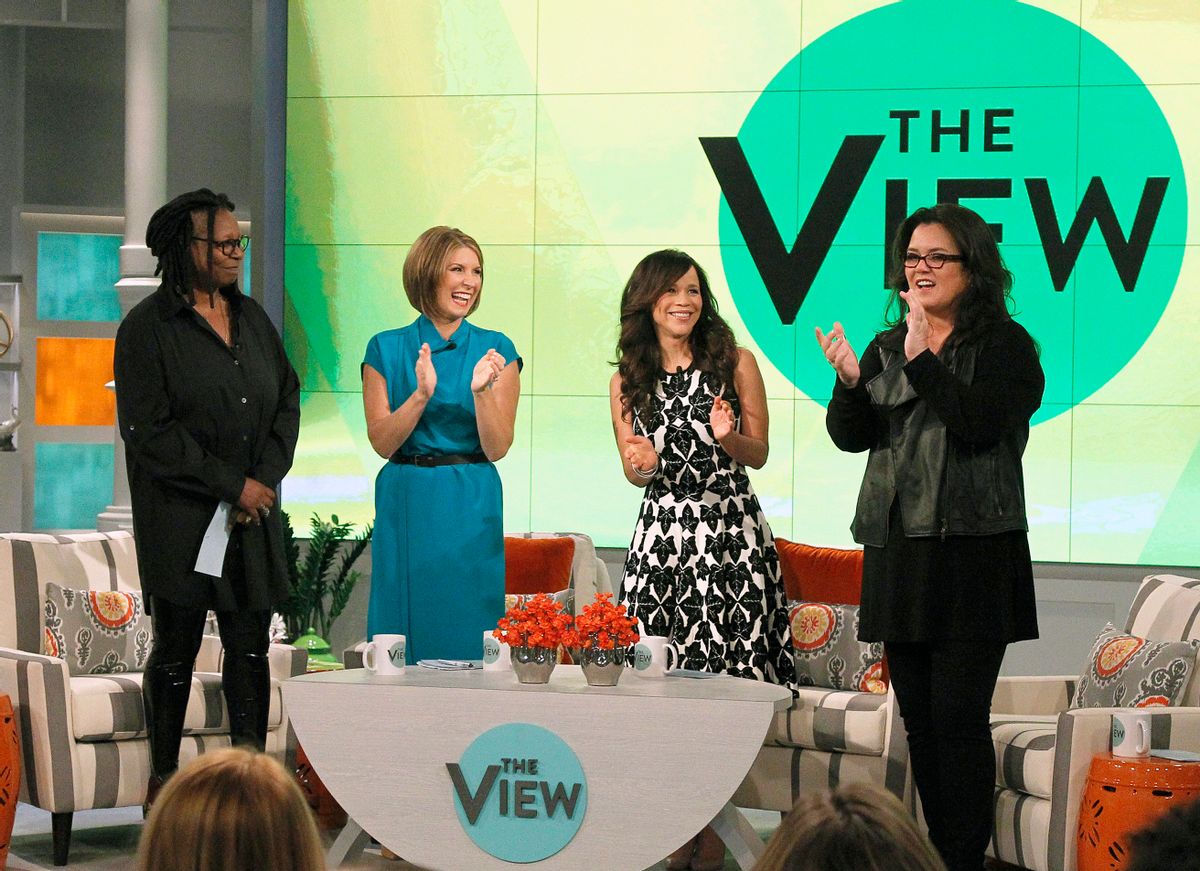 In this image released by ABC, co-hosts, from left, Whoopi Goldberg, Nicolle Wallace, Rosie Perez and Rosie O'Donnell appear on the set of the daytime talk show "The View," on Monday, Sept. 15, 2014 in New York. (AP Photo/ABC, Lou Rocco) (AP)
--

Today on "The View," the panel engaged in the hottest political debate of 2005.

Rosie O'Donnell and former Bush administration communications chief Nicolle Wallace got into it over whether or not the rapper Kanye West was right to say, as he did during a telethon to help victims of Hurricane Katrina, that "George Bush doesn't care about black people." The very, very outdated debate was prompted by Wallace suggesting that Barack Obama doesn't particularly care for the gladhanding aspect of politics and O'Donnell misinterpreting it as an offense on par with West's statement.

Then they were off to the races, recapping a debate that's important, certainly, in understanding race relations in America (Bush only flew over devastated New Orleans! But he ended up helping after some initial missteps!) but one that most people have given up on having, both because no one will ever change their minds on this and because so many new offenses have cropped up in the intervening nine years. "The View," a show about the way people with different perspectives metabolize the news, should have done a segment on Ferguson, but so far, a years-old remark provided the only heat the show's had in recent memory. Wallace told O'Donnell, with genuine emotion, that Bush had been offended by West's remark -- something he wrote in his memoir, which came out four years ago. As far as the contemporary Republican Party goes, the events depicted in "Decision Points" took place generations ago, but to Wallace, they're still fresh.

O'Donnell and Wallace are (along with Rosie Perez, who kept mum during this conversation) additions to "The View" cast this season, an attempt to reboot the venerable talk show. But O'Donnell, a television icon who quit the show in 2007 after a fight with conservative Elisabeth Hasselbeck, has so far not had the chance to do what she does best, which is dig in emotionally on politics. Wallace seems airily removed from the sort of visceral bite that both O'Donnell and Hasselbeck bring to bear on politics; as O'Donnell sought to relitigate old issues, Wallace, ever the political pro, recited a set of talking points about how George W. Bush had, in fact, made New Orleans safer. It felt wonkish and most of all calculated to offend no one (not even Obama partisans -- her remark that Obama doesn't like campaigning as much as Bill Clinton does is weak sauce, as far as catalysts for fights go). And she failed even to acknowledge the points O'Donnell was making. Wallace is, evidently, using the show as an opportunity to defend her old boss, which is hard to care about. And O'Donnell's preoccupation with recent history at the expense of shedding light on the current news cycle isn't great, either. Were Hasselbeck still here or had she been replaced by a Tea Partyer in line with the Republicans' current mood, she'd be fighting with O'Donnell over the midterms and ISIS and, yes, Benghazi. It'd be a great show, not a history lesson.