The problem is worse than you realize, says Michael Weinstein, leader of a group protecting members from coercion 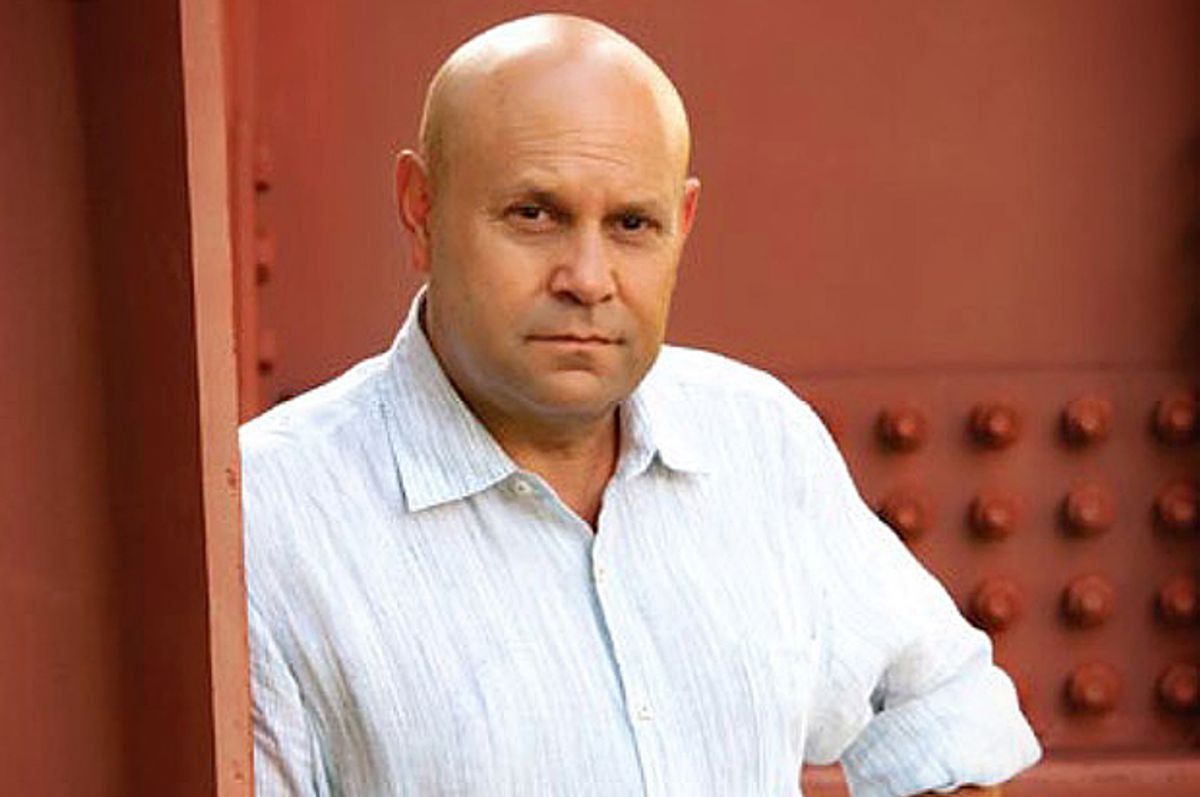 Somewhere a high-ranking (but confused) general in the U.S. Air Force has lost his damned mind.  The Air Force has instituted a completely illegal, illogical and unconstitutional mandatory religious oath in order to serve.  A technical sergeant stationed at Creech Air Force Base in Nevada is being denied reenlistment unless he agrees to swear “so help me god.”

Modern attempts to force “god” into inappropriate parts of the public sphere is a Cold War relic. Think of the '50s when “Under God” was unceremoniously shoehorned into the Pledge of Allegiance.  Contrary to popular belief, George Washington did not utter “so help me god” when taking office.  Despite irritating and ongoing attempts to force god into every orifice of the state, there has been a secular option for decades to “affirm” rather than swear to god.

This sergeant, who remains anonymous, is only the first of a soon-to-be avalanche of conscientious service members.  Today, the Military Religious Freedom Foundation (MRFF) sent a letter to the Department of Defense with 17 more Air Force noncommissioned officers (NCOs) who want to reenlist without having to conform to government-imposed religiosity.  This push-back will be used as a “proof point” by the religious right in their wholly manufactured “War on Christians,” but the facts here are clear: MRFF represents mostly Christians.

“We have 17 noncommissioned officers who object and 15 of them are practicing Christians.  They have always said the oath before but won’t now because it’s mandatory and that’s wrong.  Our two non-Christians have never said, ‘so help me god.’ They just haven’t and should not be forced to now,” said Michael “Mikey” Weinstein, founder and president of the MRFF, a civil rights group that protects military members from religious coercion and abuse.  “[Service members] come to us because they can’t get help anywhere else and they need anonymity.”

This latest attempt at religious conformity by military “leadership” is only the most blatant in an ongoing battle for the soul of the U.S. armed forces.  The Air Force always seems to be at the wrong end of this debate, and the MRFF often fields calls and complaints from service members who are often pressured to convert to a very warped view of fundamentalist Christianity or being punished for not doing so, said Weinstein.

I’ve only chatted with Weinstein over the phone, but I already like him. He’s filled with a righteous fury that is too often the tool of choice for the ill-informed right, but make no mistake, Weinstein knows what he’s talking about.  He speaks in flowing full sentences filled with case precedent, personal anecdotes and a hard-to-match grasp of constitutional law.  A former White House counsel to President Ronald Reagan and an Air Force veteran himself, he is of Jewish heritage but self-identifies as agnostic.  As a registered Republican, he seems baffled that people are so blasé that the deadliest fighting force in the history of the planet — the U.S. military — is being co-opted by religious fundamentalists. When he broke it down for me, I felt a cold fear creep up my spine.

This attempt to force service members to swear a prescribed religious oath is the single biggest blunder by Christians since the Salem witch trials. It is an obvious loser, which is what I cannot understand.  How can anyone, Christian, Muslim or atheist (or nothing at all), think that any government or private institution other than a church has the right to require religious oaths?  I asked Weinstein if there was any way this could hold up.  “You don’t even have to be a good lawyer to win this one. You could be an actor playing a lawyer on TV and win this,” he said.

The Department of Defense oversees all the military branches. In fact, when a new service member enlists, he or she goes to a place called Military Entrance Processing Station (MEPS).  The commander of this group supersedes Air Force command, and they have a long-standing procedure for a secular oath.  Only the Air Force of all the service branches tries to “go rogue” and fails so spectacularly.

If this is a guaranteed loser, why do it?  The answer lies in a culture of Dominionism rampant in the armed services.  The Wikipedia definition of this is helpful here: “Dominion Theology or Dominionism is the idea that Christians should work toward either a nation governed by Christians or one governed by a conservative Christian understanding of Biblical Law.” This small slice of extreme Christianity exerts ever more power and influence in the nation’s capital among not only befuddled old generals but defense contractors, consultants, nonprofits and, most of all, badly educated Congress members, like Michele Bachmann.  Like the war between Muslim factions in Iraq that hurts mostly Muslims, most of the victims of Dominionism are other Christians.

Bryan Fischer, a soggy-headed director at the sexist and racist American Family Association, said just this week that atheists should not even be allowed to serve in the military. For those who continue to spout the nonsensical “War on Christians” narrative, this is what true religious discrimination looks like.  To disqualify a religion or ideology from public office or accommodation is the textbook definition.

This ham-handed religious coercion is so stupid that it would be funny, except horrible, permanent damage has already been done to individuals. Imagine that you are a person of a minority faith, like Buddhist or Hindu, or a person of no faith at all. Would you feel welcome in an organization that tried to force you to declare allegiance to not only a service branch but also to a monotheistic god and against your will?

I follow this issue closely.  I am a veteran.  I left the service in the year 2000, before 9/11 and "The Passion of the Christ" and the “War on Christmas” and a dozen other absurdities crept into our social consciousness.  Most worrisome, my son, who is 20, now serves in the Air Force as a low-level enlisted man.  I hesitate to talk about his experience, because I am afraid.  Afraid of what they might do.  He is having a suboptimal experience, and I think his first mistake was walking around as an “out” atheist expecting acceptance.  I taught him growing up to be open about who he is and what he believes.  Though I had the best of intentions, the lessons I gave him could destroy his military career.

It’s horrifying that we are witnessing runaway religious fundamentalism on the anniversary of the worst religious-based terrorist attack in history, 9/11.  The people forcing Christian sectarianism in the armed services are giving aid and comfort to the enemy.  Weinstein points out that this debate we’re having in America today is a propaganda bonanza for ISIS (or ISIL or asshats or whatever these marauding killers go by).  We’re at war with terrorist and murders, not with Muslims.  America is not an invading Christian army (or should not be), and if we act like one we will only hurt ourselves.  In this way, radical Islamists and Christians who insist that “America is a Christian nation” have the same goal: to turn a war over politics and terrorism into a war between two religions.  What could go wrong?

“We are fighting a fanatical religiosity and I’m not talking about Wahhabist Islam.  We have fundamentalist, Dominionism mixed in with actual weapons of mass destruction, combined with a total dearth of restraint or oversight,” said Weinstein.

It’s all the rage in the far right wing of the religious right to talk about religious freedom.  The religious right believes that if government does not fund a nativity scene or church picnic, Christians are being discriminated against.  Real discrimination is happening right now to the people Weinstein represents.

The MRFF has 38,400 members or “clients,” including active-duty members of every service and branch, sailors, soldiers, Marines and midshipmen.  Of those, 96 percent are Protestant or Catholic, according to Weinstein.  The remaining 4 percent that are a combination of Muslims, Jews, Hindus, Buddhists, Native Americans and nonbelievers.  They even have a dozen members of the Jedi Church.  Weinstein’s group takes all cases and complaints of religious coercion regardless of the faith of the member.  “This is America, so we don’t care,” he said.

For his efforts and those of his staff and volunteers, he has become one of the most reviled men in America.  He should be treated as a constitutional scholar and defender, but instead is treated to daily attacks, personal threats to his safety and a nonstop waterfall of hate.  He’s had dead animals left on his front porch and swastikas and crucifixes painted on his home.  For its consolation, though, MRFF has six Nobel Peace Prize nominations.  “We have serious security,” he said. “This is not narcissism. It’s necessity.”

I have read just a sample of the hate mail.  Here are some charming bits:

The MRFF gets thousands of such comments.  It’s gotten so bad that Bonnie Weinstein, Mikey’s wife of 37 years, is coming out with a book early next month filled with the hate mail.  It’s titled: "To the Far Right Christian Hater: You Can Be a Good Speller or a Hater but You Can’t Be Both."  They do get many nice, supportive comments as well, dozens of which have come in since this Air Force Policy was made public. Many service members of all religions oppose a religious test for service.

Yet even in the worst climate for religious intolerance in our lifetimes, there are hopeful signs.  Weinstein has been invited to testify before Congress in the Military Personnel Subcommittee, and the Department of Defense inspector general has also invited Weinstein to discuss the state of religiosity in the Pentagon. Both meetings are scheduled for just over a week from now.

Declaring a serviceman a liar, cheat or a scoundrel because he or she won’t take a religious oath is an attack on that person’s honor.  I know it sounds goofy to people who haven’t served, but honor means something to fighting men and women.  This religious malignancy can’t be tolerated in a secular, nationwide fighting force unless you want to create an army of religious terrorists.

“When you tell someone they lack honor because of your chosen religious faith or lack thereof, it is no different than telling a person that they are stupid because of their skin color or sex,” said Weinstein.

This latest battle in the Air Force proves that America needs the MRFF.  The military protects everyone, all of us, agnostic, gay, liberals, conservatives, swingers and satanists.  If only some people and faiths are deemed worthy of service and protection, the military becomes something else, something ugly and dangerous.  America should never stand for this kind of intolerance and hate.

Update: According to a press release from the American Humanist Association sent shortly after this story was published, "the U.S. Air Force [is now] allowing an atheist Airman to reenlist using a secular affirmation that does not include the phrase “so help me God.”

The release continues: “We are pleased that the U.S. Department of Defense has confirmed our client has a First Amendment right to omit the reference to a supreme being in his reenlistment oath,” said Monica Miller, an attorney with the American Humanist Association’s Appignani Humanist Legal Center. “We hope the Air Force will respect the constitutional rights of Atheists in the future.”