There's no rationalization for corporal punishment: Why Adrian Peterson's apologists are wrong

What the Vikings star did to his son wasn't "discipline" -- it was abuse. So why are so many giving him a pass? 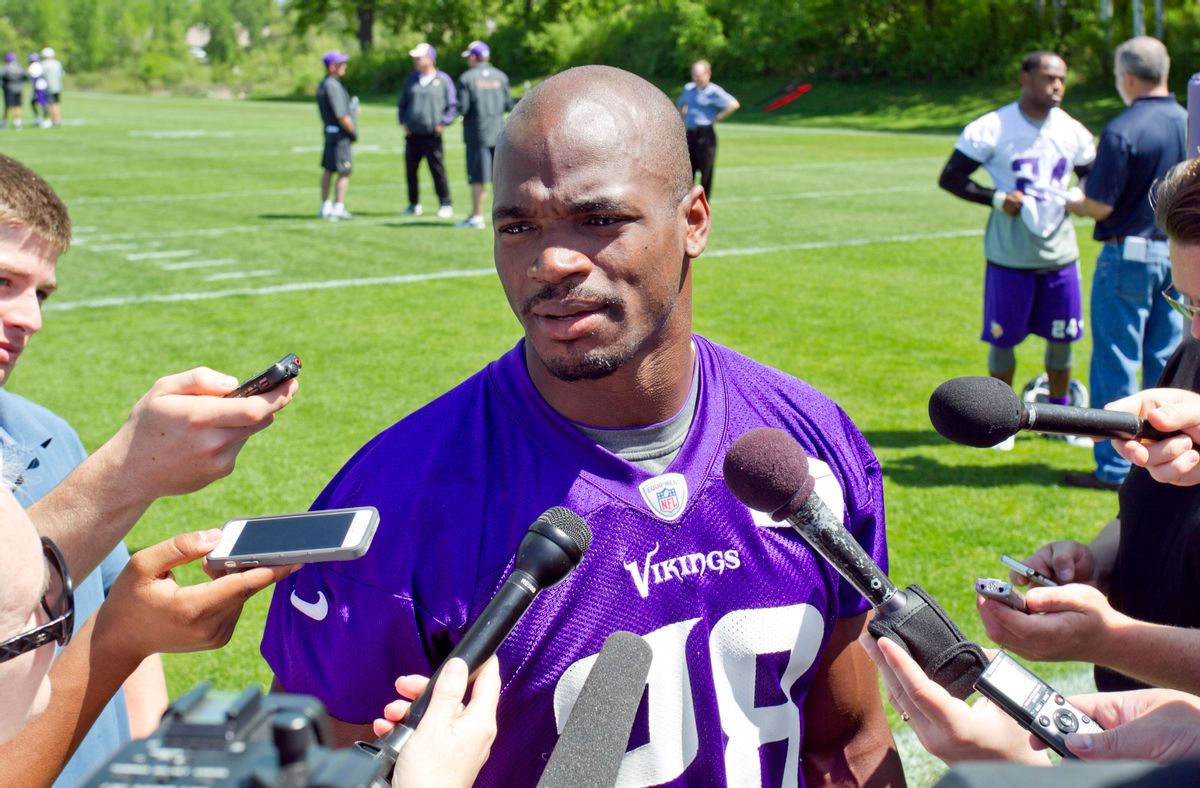 Adrian Peterson, running back for the NFL’s Minnesota Vikings, is a child abuser.

That is not alleged nor reported, it is fact.

When someone grabs a tree branch (colloquially known as a “switch”), and admittedly strikes their 4-year-old son viciously and repeatedly until bloody, open wounds form on his inner thighs, and cuts and bruises form on his scrotum, back, legs, ankles, and buttocks—with defensive wounds on his little hands from trying to protect his body from a 217-pound NFL player—that is not discipline, that is abuse. And if that child were an adult, it would be assault.

More from DAME: "#Dudetime Is My Favorite Time Suck"

But Peterson, whose 2-year-old son was beaten to death by his ex-girlfriend’s boyfriend last year, doesn’t see it that way.

After he "spanked" his son for allegedly pushing another child off of a motorbike video game, he texted the following to the child’s mother:

“Got him in the nuts once I noticed. But I felt so bad, n I’m all tearing that butt up when needed!”

“Never do I go overboard! But all my kids will know, hey daddy has the biggest heart but don’t play no games when it comes to acting right.”

And his attorney, Rusty Hardin, had this to say:

“Adrian is a loving father who used his judgment as a parent to discipline his son. He used the same kind of discipline with his child that he experienced as a child growing up in east Texas … it is important to remember that Adrian never intended to harm his son and deeply regrets the unintentional injury.”

Apparently, he thought the lashes from the “switch” would be as gentle as butterfly kisses and the flutter of tiny, fairy wings.

The conversations that have been sparked in the wake of Peterson beating his son have been explosive. Once again the pros and cons of corporal punishment, particularly within the Black community, have been up for debate. Though there have been many rationalizations by Peterson supporters for the abuse of a 4-year-old—ranging from “I was whooped and I turned out great” to “Spare the rod, spoil the child,” advice always inaccurately attributed to the Bible—there is one that stands out the most because it’s regurgitated with such misguided zeal:

"If we don't beat them, the police will!"

Yes, because spanking Black children has caused a significant decrease in state-sanctioned violence and murder of Black people. Because if only Oscar Grant, Rekia Boyd, Ersela Ore, Marlene Pinnock, Mike Brown, Sean Bell, Tarika Wilson, Trayvon Martin, Jonathan Ferrell, Aiyana Stanley, Wendall Allen, John Crawford, Ezell Ford, Eric Garner, Kimani Gray, Amadou Diallo, and the Black people killed at least once every 28 hours in this country by law enforcement had gotten more "whoopings" from their parents, the cops would have seen how well-behaved they were and allowed them to go on their way with a wink and a smile.

Let’s stop for a moment to soak in how absolutely ridiculous that sounds.

More from DAME: "How Do You Explain Racism to Your Black Son?"

More often than not, this dangerously flawed logic steeped in fear, victim-blaming, and respectability politics comes from the same people who believe that Black people are disproportionately incarcerated, not because of a Prison Industrial Complex that profits from putting Black bodies behind bars, but because they didn't get beaten with enough switches.

These are the people who believe that systemic manifestations of racism: Stop-and-Frisk, Zero Tolerance, Broken Window, and Quality of Life policing compounded by the internal bigotry of some police officers would have no effect on Black people whatsoever if they had just been whipped enough as children.

It is true that during slavery, to keep us working hard and subservient, “massa” whipped us. It is also true that enslaved African mothers were often forced to beat their children so that it wouldn’t be done for them. That said, the perceived necessity of beating our children to keep them safe is rooted in our violent oppression in this country. And to quote Audre Lorde, “The master’s tools will never dismantle the master’s house.”

Many of us have been trained to believe that abuse is “good parenting” and, despite commonly held beliefs, we live in a nation that capitalizes on that generational dysfunction, not rewards us for it.

“Black America really needs to evolve its conversation on this kind of domestic violence because the powers that be are aware of our attachment to and celebration of this practice and they are using it against us to feed the prison pipeline and the foster care industry,” says Dr. Stacey Patton, Senior Reporter at The Chronicle of Higher Education, anti-spanking advocate and founder of Spare The Kids. “So as we sit on Facebook and other social media sites waging this debate, joking about the issue, and lying about how hitting children is responsible and loving Black parenting, laws and policies are being put into place to trip us up."

Patton continues, "When I speak on this issue, please know that I am coming from a place of love—love for children, for community, love for my people. I am not trying to disrespect your mama or you. I'm trying to do work that evolves us socially, physically, emotionally, spiritually and keeps parents out of prison and children out of foster care and the juvenile justice system.”

And to evolve, we must recognize how the pain we inflict upon each other is rooted in anti-Black racism.

When 18-year-old Mike Brown was gunned down by Ferguson police officer Darren Wilson, there were many people who said that he deserved it. They said he should have been more obedient, subservient, and respectful. He allegedly wasn’t, so his death was his fault.

When Janay Palmer Rice was knocked unconscious by her now-husband, former Baltimore Raven Ray Rice, many men—and some women—jumped to his defense because she allegedly spit on him prior to the Mortal Kombat blow that left her face down and skirt up on the elevator floor. They claim that she was out of line and she deserved it.

In Brown’s case, Black men and women together were unbowed in enraged protest of his extrajudicial killing. Once the Rice video went public, however, many Black men began spewing justifications for the vicious abuse as women lamented the lack of solidarity. Then when the Peterson story broke, both male and female corporal punishment advocates joined forces to extol the virtues of “whooping” children into submission.

More from DAME: "Is Failure The Secret to Success?"

See what happened there?

We have learned that to be in a position of authority or power over another human being gives us the right to deny them their humanity.

Let’s be clear: Domestic violence of any kind is not specific to the Black community and my aim is not to pathologize Blackness, rather to show how a White supremacist system that has long victimized us casts its shadow into our homes and informs how we discipline our children.

It depends upon Black men, women and children being conditional victims—of the state, of our partners and of our parents.

Like Dr. Patton, my goal here is not to cast judgment, but to raise awareness of the ways in which we perpetuate our own subjugation.

I am very clear that the same system which disproportionately incarcerates Black men, taught us that hitting our children was the only way we could reduce their chances of being murdered by police.

The same system that thrives on keeping Black people under and unemployed teaches us that beating our children is the only way to get them to work hard.

The same system that taught Black women that we had to relax our hair to be pretty and pray to White Jesus for protection is the same system that taught us that whether hanged from trees by their White masters or being left with open, bloody sores by their Black fathers, our children are responsible for their victimization and if only they would have acted a little better, everything would have been alright.

These are the lies that we have to stop telling ourselves. There are many effective ways to discipline children that do not include abuse. And if we love them like we say we do, we owe it to them, and ourselves, to learn them.