Chris Christie's lapdog press: How the New York Times and co. are embarrassing themselves

He's an icon of cronyism and being probed for major shenanigans. But the coverage amounts to an alternate reality 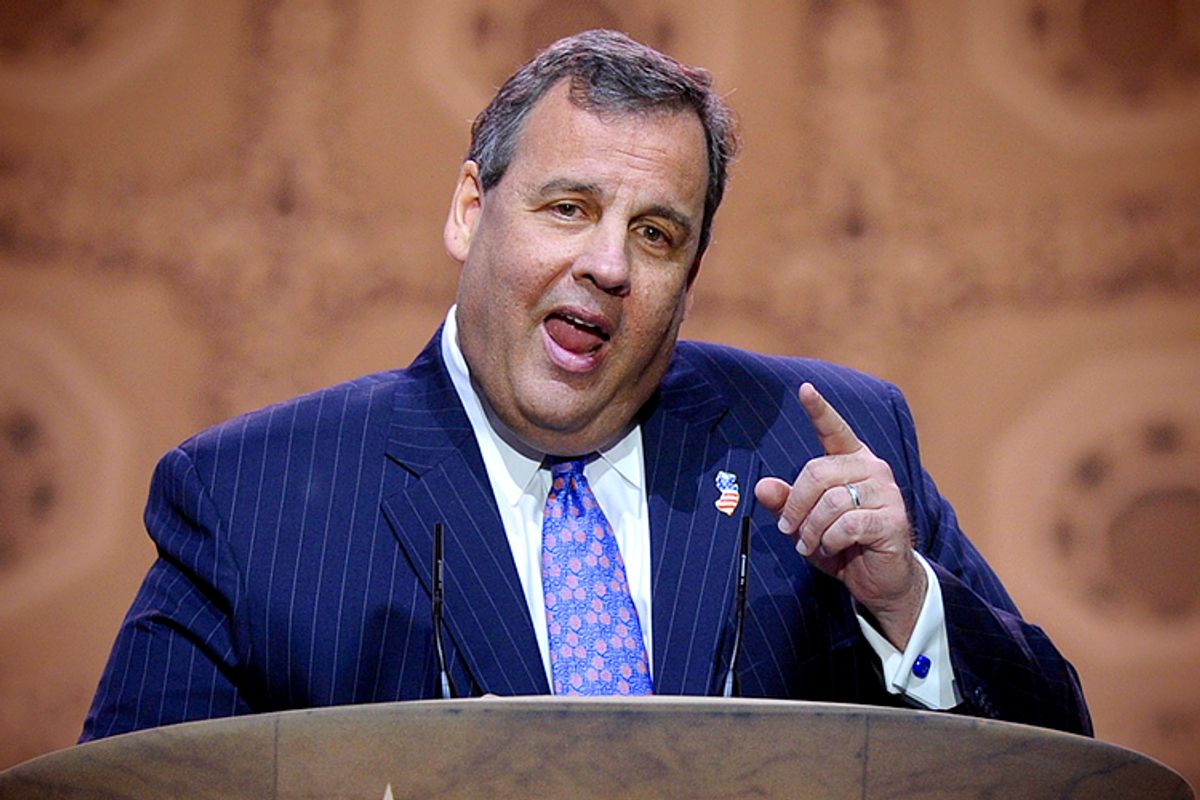 Throughout the months of Gov. Chris Christie's post-“Bridgegate” crucible, the governor has remained politically viable by tightly controlling his narrative  as he travels to  Iowa and New Hampshire. Even as the New Jersey Legislative Select Committee on Investigation was taking testimony and U.S. Attorney Paul Fishman was gathering facts, Gov. Christie had his quick turnaround "exoneration" in hand. It came in the form of his taxpayer-funded, multimillion-dollar “independent report” by trusted (by him) attorney Randy Mastro.

Much of Christie’s success is attributable to his guile, self-effacing wit and powers of intimidation. On occasion he gets a big assist from a compliant media that covers his events like they are in a rote exercise, not a unique moment in time, that offers the chance to break some news and hold him accountable.

Judging by the tape, such was the media’s posture at this week’s 18-minute joint press conference with Gov. Andrew Cuomo, New York City Mayor Bill de Blasio and Jeh Johnson, federal secretary of homeland security. It was billed as a major post-Sept. 11 reset on the region’s counterterrorism efforts.

Also in attendance were officials with the scandal-plagued Port Authority of New York and New Jersey, which operates the George Washington Bridge as part of its sprawling infrastructure portfolio. The bi-state agency, created by an act of Congress in 1921, also has its own 1,800-officer police department. It really is its own independent city-state, like the Vatican, that is controlled by the  governors of New Jersey and New York who have historically packed the agency with campaign donors and political operatives.

New York Times photographer Michael Appleton’s photograph skillfully caught what was meant to be a Rushmore moment of reassurance in the era of  ISIS. Gov. Christie was in his "Joe Friday," former federal prosecutor persona, telling reporters there was an “undeniable heightening” of terrorist activity afoot. The Times caption quoted Gov. Cuomo’s observation that “We’re not in a state of denial” regarding the ever-looming threat of a catastrophic terrorist attack here on the “homeland.”

In the Times reporting, DHS Secretary Johnson was quoted observing that Govs. Christie and Cuomo as well as Mayor de Blasio all had “a very good sense of homeland security issues and matters.”

There was no mention in the Times story about the fact that the Christie administration, the Port Authority and its police force are all under scrutiny in an ongoing federal criminal probe into the use last year of the George Washington Bridge as a prop for a petty political payback executed by what we are told was a misguided Christie loyalist. It was as if the roiling corruption scandal, that has at its center the bi-state agency and its police department, was unfolding in a parallel universe of space and time.

Just as the Brooklyn Bridge over the East River has been a terrorist fixation, so too has been the Port Authority’s George Washington Bridge, which in essence makes “Bridgegate” as much about national security as it does local politics.

Back in the 1990s it was on the target list of followers of Sheik Omar Abdel Rahman, who, along with several other conspirators, was convicted for plotting to blow up the GWB, the Lincoln Tunnel and the New York office of the FBI.

Post 9/11 individual thrill seekers who climb to the top of the Brooklyn Bridge or parachute from the One World Trade Tower are to be arrested and charged. Political operatives who cause a four-day traffic jam on the GWB on the anniversary of Sept. 11, and use the Port Authority police to do it, well, we don’t know yet.

Perhaps it would have been judged “off topic” at this week’s DHS confab to question directly both Govs. Cuomo and Christie about  reports in the Bergen Record earlier this month that Port Authority police supervisors on the GWB took patrol officers to task for using their radios to communicate up the chain of command  about the  “hazardous” conditions the patrol officers saw firsthand were generated by the phony “traffic study” lane closures back in September of 2013.

According to interviews conducted by the New Jersey legislative committee investigating “Bridgegate” that were obtained by the Bergen Record, Port Authority police brass rebuffed the request from officers on the scene to reopen the lanes. As a direct consequence of their actions local emergency first-response times went up.

The four-day traffic coronary for Fort Lee residents was set in motion when David Wildstein, a Gov. Christie appointee to the Port Authority,  ordered the closure of the local lanes in what has been widely reported as payback for Fort Lee’s Democratic Mayor  not endorsing Gov. Christie for reelection. But now we know, thanks to the Bergen Record and the New Jersey Legislative Select Committee on Investigation, that the improper, perhaps even illegal, closure was enforced by the Port Authority police who even chauffeured Wildstein around so he could observe the disastrous impact of his scheme firsthand.

For Nick Casale, longtime NYPD detective and former director of counterterrorism for the Metropolitan Transit Authority, by their very nature independent authorities and their  police departments are near impossible  to hold accountable.  Casale says these “fiefdom” police agencies  should be disbanded. “What happened at the George Washington Bridge is a perfect example,” says Casale. “ The Port Authority police do not report directly to elected officials so it is easy for them to get involved in political shenanigans.”

Casale says the culture of an institution has to be factored into protecting its physical facilities from attack.  If Port Authority police are busy serving patronage Port Authority executives' whims, what else are they not doing in terms of counterterrorism? “Corruption can always provide someone critical access to infrastructure that on its face would not appear tied to terrorism,” says Casale. “What you have to realize is that corruption is the soft underbelly terrorists look for as the way in.”

Long before the latest installment of “Bridgegate” the Port Authority has repeatedly fallen prey to political cronyism and corruption.  Just two years ago a consultant hired by the Port Authority, at the insistence of both governors, concluded the agency “was challenged and dysfunctional” with “a siloed underlying bureaucracy” that was plagued by “insufficient cost controls” and a “lack of transparent and effective oversight” most exemplified by its massive cost overruns at the World Trade Center site.

It is hard to overstate the centrality of the Port Authority to our national counterterrorism risk profile. Between its airports, PATH system, bridges and tunnels it's the  region's vital organs in transit. The terrorists have zeroed in on its facilities twice now with increasing lethality.

In 1993, in the first World Trade Center bombing, four Port Authority employees lost their lives.  On Sept. 11, 2001, 37 Port Authority officers were killed along with 47 civilian employees of the bi-state agency.

In 2005 a New York state civil trial jury actually held the Port Authority 68 percent liable for the damages done in that first 1993 attack when terrorists successfully parked and detonated an explosive-packed truck in the World Trade Center’s underground garage. Jurors were troubled by  Port Authority officials’ decision to reject the recommendations of a 1985 report done by a Port Authority mechanical engineer who advised the garage be closed because it left the “most attractive terrorist target” wide open for just such an attack. Back then  commercial interests trumped security concerns.

In 2011 a closely divided New York Appeals court overturned the lower court ruling, which had held the Port Authority liable as the private landlord of what was primarily a commercial building.  The state’s highest court ruling countered that the Port Authority was shielded from liability by sovereign immunity.

For years now members of state legislatures on both sides of the Hudson, from both political parties, have tried unsuccessfully to  bring more transparency and accountability to the Port Authority.  For New Jersey Senate Majority Leader Loretta Weinberg, the latest disclosures about the role of the Port Authority police in “Bridgegate” have upped the ante. “You have a policeman on the scene sending out a message that a situation is becoming increasingly dangerous and he is told to shut up by superior officers?”

So much for seeing something and saying anything.