Fall TV's rom-com boom: Why it's so hard to translate this genre to the small screen

"Manhattan Love Story," "A to Z" and "Marry Me" try to wring sit-com jokes out of rom-com tropes 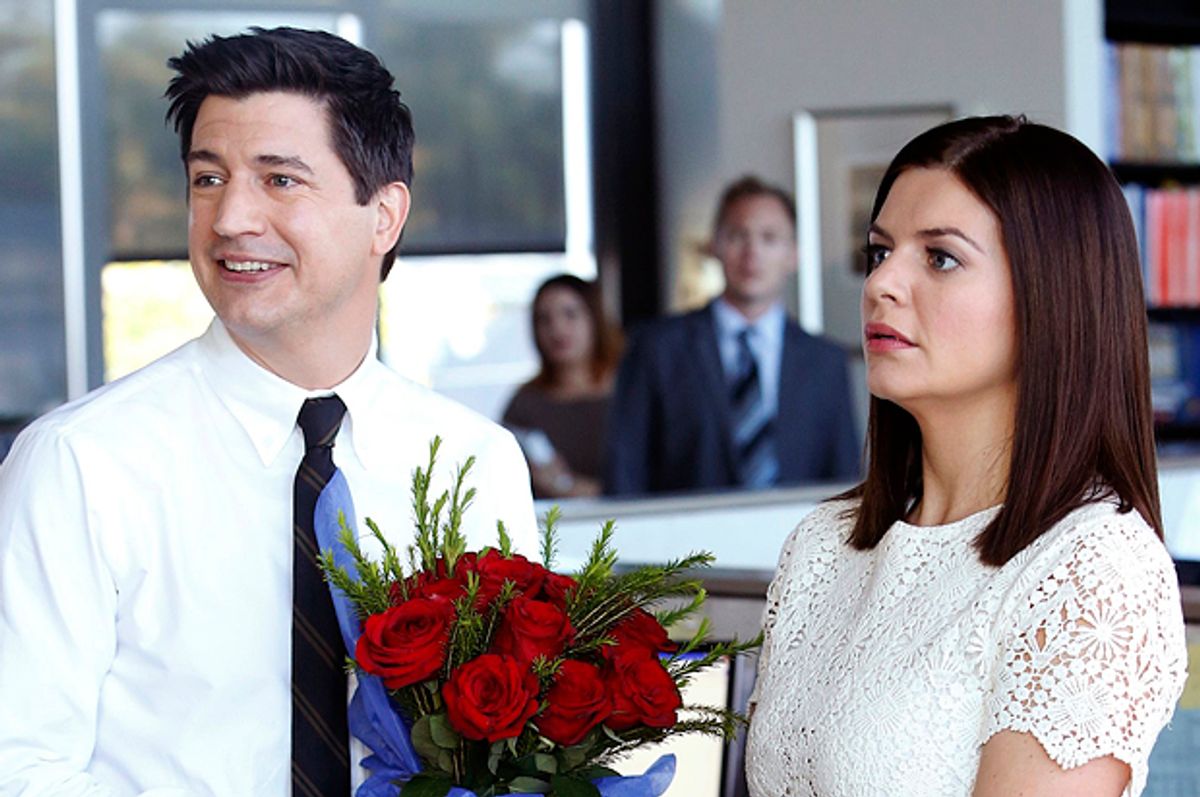 Ken Marino and Casey Wilson in "Marry Me" (NBC/Greg Gaynes)
--

The romantic comedy has, historically, only really worked on TV when it’s not actually a romantic comedy at all. “Friends” derived its narrative momentum from Ross and Rachel’s on/off/on/off thing, but had four more players in reserve to ensure the show wasn’t entirely about an implausibly drawn-out affair. “Cheers” had a whole barful of characters to liven things up when Sam and Diane’s relationship wasn’t foregrounded — and managed to keep going for years after Diane left the scene. And shows from “Roseanne” to “The Cosby Show” have focused on long-term, loving couples for whom the adventures of dating are significantly behind them.

That’s because dating isn’t, in and of itself, interesting, except to the people in the couple. The sort of complications that make the process of getting to know a potential romantic partner worth watching fit perfectly into the length of a movie comedy, but strike false notes when drawn out over the course of the series. If “Friends” had been just about Ross and Rachel breaking up and reuniting, it would be unwatchable. Three new romantic comedies starting this fall attempt to do the impossible — get us invested in a romance that’s, inevitably, going to face an astonishing number of hurdles. Only one succeeds, and it’s the one that doesn’t indulge a twee high concept to try to gin up interest in its characters.

ABC’s “Manhattan Love Story” is the worst of the bunch, indulging a weird streak of nihilism easily mistaken for edge. The show, debuting Sept. 30, begins with its two lead characters’ internal monologues, a concept that runs through the episode as we hear what each is thinking. (It’s never too deep.) Peter (Jake McDorman) is ranking women’s bodies, while Dana (Analeigh Tipton) is ranking their purses. Women love shopping! The couple end up meeting on a blind date in which he mocks her “bucket list” (yes) for her time in New York, specifically taking umbrage at her desire to go to the High Line, which makes no sense, because the High Line is great.

Dana is likable, though far too much of a naif to be believable as a woman hired from out-of-state to take on a job as an editor at a publishing house. In a scene emblematic of the show's understanding of technology, she frantically runs through different “relationship statuses” on Facebook — including “widowed” — after a date. Meanwhile, Peter is utterly monstrous. (His vocalization of a completely tired rant about how kids today get too many trophies edges out Dana’s internal wondering if crying makes a man gay.) The episode runs through so many reversals in its 22-minute length that one boggles at the thought of a full season — just how many times are we going to see a misunderstanding and then an apology? And given that both characters are paper-thin stereotypes — the naive innocent vs. the mean guy who doesn’t care about love — what do their internal monologues add? The episode’s conclusion asks us to keep tuning in to see whether Peter can move past his cynicism. I’d prefer not to.

“A to Z,” starting on NBC on Oct. 2, is marginally better but even more married to its central conceit, one that seems deeply unsustainable. Each episode is to tell a chapter in the story of the “eight months, three weeks, five days, and one hour” a narrator tells us that Andrew (Ben Feldman) and Zelda (Cristin Milioti) spend together. It’s all a bit too “How I Met Your Mother” — the show on which Milioti got her big break as the late mother — in its notion that didactically telling you some of what’s going to happen is experimental enough to obviate character development beyond “He’s a romantic! She’s practical!” Sure, it could (and probably will) happen later, but the fact that “A to Z” is based around a simplistic “x vs. y” structure means that we’ll be seeing the same argument over and over, up until they break up. A narration track adds sizzle, but the raw material’s blandness will be hard to overcome.

Perhaps “Marry Me,” premiering Oct. 14 on NBC, will crack the code. The show was created by David Caspe, the creator of the late, lamented “Happy Endings,” and stars Casey Wilson, one of that show’s stars and Caspe’s real-life wife. What “Happy Endings” did well with its freaky married couple Brad and Jane, and what “Marry Me” promises with Wilson’s and Ken Marino’s lead characters, is a depiction of a couple that’s fundamentally stable. When the tension over whether or not a couple will actually break up is removed from the equation, there’s room for far more interesting stories to get told. On “Marry Me,” that’s the story of a longstanding couple who want to get engaged in just the right way — a dumbly zeitgeist-y sounding concept that won me over in its nuances. It managed to tell a story with real tension that was asking something more meaningful than “Do these people belong together?” We already know they do — and that’ll be more fun to see week-in and -out.

The humor in the pilot episode of "Marry Me" felt remarkably specific, appropriate for to two characters who actually have a shared history — rather than getting to know one another with randomly-spewed-out references to “the culture of mediocrity” (“Manhattan Love Story”) or the Lumineers (“A to Z”). It’s hardly a coincidence, too, that this was the only pilot with promising side characters; when you’ve been with someone for years, your friends are part of your life, rather than accessories to a story that’s hard for outsiders to understand. On “A to Z” and “Manhattan Love Story,” there are only two people who matter, and we see them the way they see one another, as sketches whose details will only get filled in after years together. But, as a viewer, I don’t think my relationship with either show can be saved.