In Brownbackistan, everything is awesome! And don’t let any liberal tell you different 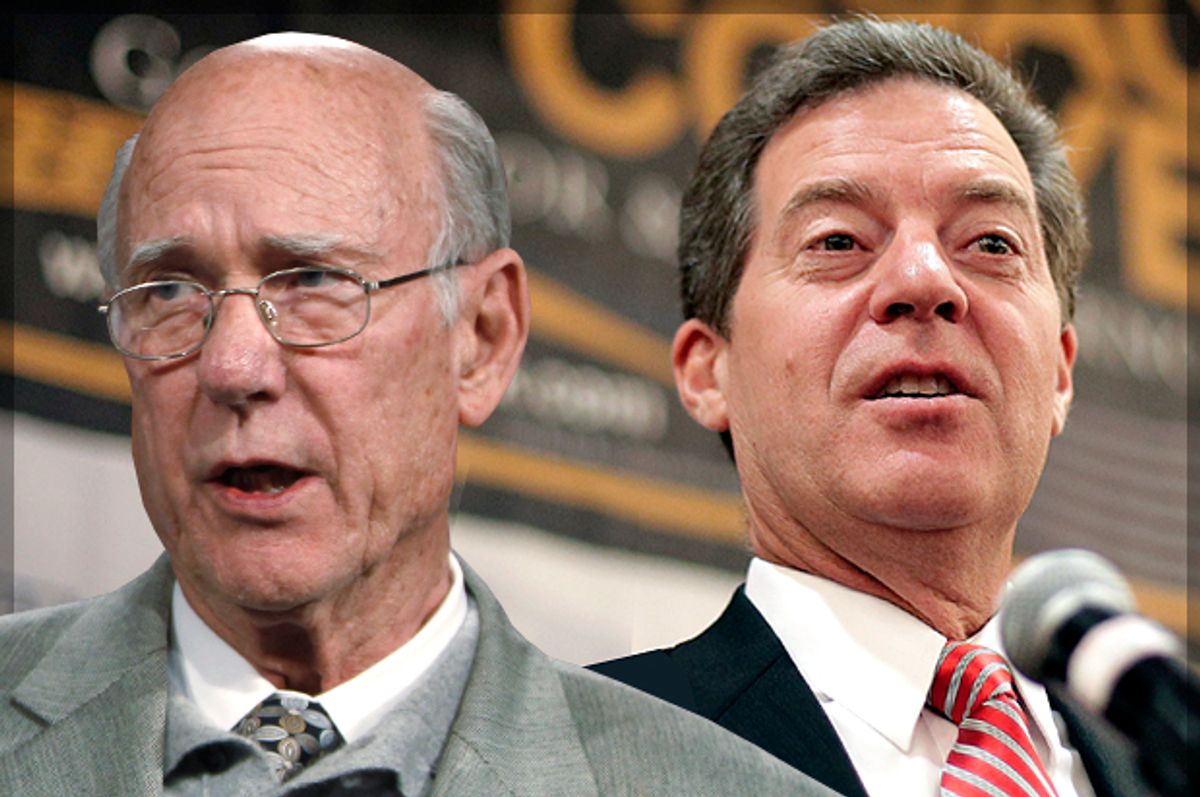 If you visit the campaign web site of Kansas Governor Sam Brownback, who is fighting a difficult battle for re-election, you will see a series of large-type boasts about his nonexistent economic achievements, and then you will read this:

“Our administration has accomplished this and so much more in my first term as Governor. . . . Help me stand up for Kansas against an over-reaching federal government. Join Lt Governor Colyer and I today.”

Yes: Join I today. The governor of Kansas wrote this—or signed it, anyway—and just above a list item declaring “Investing in Education.”

It is a small matter, and yet it is typical in its own careless way of the man’s calamitous administration of my home state since he ascended to the governorship in 2010. Everything was supposed to be so awesome in Kansas, so godly and upright, and everything has gone so very wrong. The little things, the big things, and everything in between.

You might recall that Sam Brownback was, in his days in Congress and the Senate, one of the most prominent national leaders of the Republican Party’s moral-purity wing; he even briefly ran for president in 2007. Matters of the spirit were quite the thing in conservative rhetoric in those days, and Brownback was always in that movement’s fore, crusading against offensive entertainment, stem cell research, and other abominations. Put a man like Brownback in charge of an executive branch, however, and a different figure emerges. He wanted to build a “red-state model” in Kansas, he used to say, a community of righteousness that could “show the way back to being America again.” What he has constructed instead is a microcosm of everything that is wrong and disastrous with conservative governance.

It is as though Jack Abramoff and Tom DeLay had been transplanted to Topeka and given a free hand to sculpt the state however they chose. You’ve got runaway incompetence in the state administration; heavy-handed partisanship, with conservative Republicans crushing moderate Republicans after the familiar pattern; corporate money—Koch Industries is based in Wichita—sloshing around like a vast underground aquifer. You’ve got privatization, deregulation, and an enthusiastic race to the bottom. (Gotta be more business-friendly than those people in Missouri!)

You’ve got tax cuts so severe they’ve brought on fiscal catastrophe and thrown the state’s school system into crisis. You’ve got bullying by state legislators against organizations that criticize Brownback’s healthcare plans, and hints of pay-to-play corruption just under the surface. And, of course you’ve got credit downgrades as all this becomes known to the outside world.

The wrecking crew is in full swing in Kansas, and for once the people there seem to be ticked off about it. Once the hero of the state’s sin-hating millions, Sam Brownback is unpopular today. Indeed, his situation is so bad that the only sure way he can be rescued is by a mass disregard for economic reality—by cognitive blinders strapped on simultaneously by millions of individuals.

Either that, or by the culture wars.

Very soon, I expect, the time will come for Brownback to rally Kansans around the fetus. For now, however, it is the mass-cognitive-blinder strategy that leaps out at you when you cast your eyes over his reign. In a 2013 speech about his red-state model, for example, he talked about the “principles” that undergirded his plan, and insisted they were not of the kind detectable by ratiocination: “it can’t be mental principles, it’s got to be things that connect through the heart.”

And Brownback meant it. During the 2012 debate over whether to swallow his strychnine tax cuts, Brownback’s team brought to Topeka none other than economist Arthur Laffer, he of the repeatedly discredited theory that cutting taxes magically increases government revenues. Laffer’s formula has been tried again and again at the national level and has famously failed, but the Kansas legislature jumped when presented with its very own chance to defy “mental principles.” Unfortunately, the rules of accounting prevailed and now Sam Brownback’s reelection campaign is begging voters to persuade themselves that everything they’ve read in the newspaper is a falsehood; that things are really and truly OK, despite the evidence of the senses: “The sun is shining in Kansas and don’t let anybody tell you any different.”

That last is the tagline Brownback delivers in one of his TV commercials that you can watch yourself on YouTube. It is something to behold. I have never been in a cult indoctrination session, but I have started to think that this ad depicts the procedure. Here is this weirdly smirking man, Governor Brownback, telling you something he obviously doesn’t believe—and then he’s telling a different group—and then another. Each of these audiences is nodding constantly; each of them is made up of clean, neatly dressed people—some of them in a well-appointed suburban kitchen, some of them sitting on a pleasant veranda, some of them in a corporate boardroom. And the subject the governor is advising them on is how you get out of poverty! You know: hard work, family structure. “That’s the way out of poverty!,” he exults, with that odd smile of his. To judge by the clothes and the settings, however, these people have never even had cause to doubt the timely arrival of their next meal, let alone fear a lifetime of ill-paid toil. For practical purposes, Brownback might as well be giving them tips on how to land a spaceship on the surface of the moon.

It makes no sense. But the unspoken object of the session is obvious: Don’t worry about what is happening. All these reports about economic disaster in Kansas—about the “poverty” that conservatism is supposedly inflicting on people—forget about them. It has nothing to do with the way you govern a state.

There has also been a shock-and-awe quality about the Brownback years. So numerous are the consequences of Kansas’s tax cuts (to choose the central item from Sam Brownback’s list of reforms), that it is difficult to try to process them all. By this I do not merely mean to point out that the tax cuts turned out to be much better for the rich than for everyone else; that’s kind of a cliché at this point—or that the tax cuts haven’t brought the economic growth Brownback said they would; that, too, is always the way these things turn out. More important is the panorama of disaster they have inflicted on education in the state: Fewer teachers working with more students, cuts to sports and art programs, and even school closings here and there.

Local governments, meanwhile have tried to make up the shortfall by raising property taxes (which are paid by a big part of the population in rural states), with the ironic result that while the hated moderate yuppies in the posh Kansas City suburbs get to enjoy Brownback’s tax cuts, the hardworking conservatives of the poorer counties have to pay much more. Other institutions have felt the pain as well: There was a risk, at one point, that the state’s courts would run out of money, and now Kansas prisons, that favorite conservative institution, are reportedly being forced to operate with insufficient guards. But what’s the big deal? A leader of the conservatives in the state legislature admitted in July that chopping back government was, in fact, one of the goals of the tax cuts all along.

Of the dozens of accounts of catastrophe-in-Brownbackistan that I have sifted through, however, the one I keep coming back to is the tale of Aaron Jack, a Tea Party Republican whom Governor Brownback appointed to run the Kansas Securities Commission back in 2011. A Tea Party financial regulator—oh, wouldn’t Rick Santelli be proud!

Can you guess how the Tea Partier played it? Yes, you can: He played it exactly like the hack-n-crony regulators of the Bush Administration that the Tea Party was supposed to be so very different from. Jack’s main agenda item, according to a withering account of his tenure that ran last year in the Topeka Capital Journal, was to get rid of a majority of the commission’s staff and replace them with political allies and, of course, lobbyists. His grand vision was to cut the regulated some slack, to remake the state as a place where hedge-fund types would no longer need to worry too much about “overzealous” supervisors — “to open Kansas as a destination state for hedge fund managers, private equity operators and venture capitalists.” With the tools of deregulation they were going to build a Wall Street on the Plains—and along the way Mr. Jack somehow found money in the commission’s budget to air radio spots in which he himself told listeners about all the neat things he was doing. Finally, when things didn’t work out for him in politics, it was through the revolving door to a local brokerage. Or, as the Topeka paper put it, in a near-perfect Midwestern voice:

“His interest faded as he gained a sense his rightful place was at a Leawood investment firm.

“ ‘I got my cash-out job to the private sector,’ Jack said.”

That story has pretty much been lost amid the broader avalanche of calamity in Kansas, but still it’s worth dwelling upon. Ten years ago, when I wrote a book about politics in the place where I grew up, I was impressed by the populist tone of the state’s conservative rebels. I was amused by the way they mocked the state’s successful and well-connected professional class. (This kind of thing still goes on, of course. On Thursday, Republican Senator Pat Roberts, who also finds himself behind in the polls,denounced his opponent as “another millionaire politician trying to deceive voters and buy a U.S. Senate seat.”) In the aftermath of the slump brought to you in 2008 by Wall Street, those populist rebels won. Thanks to the Great Recession, those rebels were able to defeat their opponents completely. The offices of the state are now nearly entirely at their command.

And what have the populists’ leaders done with that power? To say they proceeded to sit down and write passionate love letters to Wall Street is hyperbole, but it’s not sufficient. What is going on here is so freakishly self-damaging, so bizarrely self-contradicting that it makes you think of a man trying out his new shotgun on his own foot, or of a president putting a meth addict in charge of the nuclear football.

Think back over all those years of prayer and organizing and going door to door and yelling about the liberal elite with their lattes and their fancy Volvos—what has it fetched the rebellious right-wingers of my home state? Yes, one of their leaders got a cash-out job in leafy Leawood. Hopefully a McMansion, too. But for most of the rest of them it’s crumbling schools and dwindling services and the huge expressionless face of the local ag monopoly, remorselessly bidding down the labor of their neighbors. Before they vote again for that prayerful fellow who makes such a show of genuflecting before Mammon the great and powerful, they need to consider: maybe this guy’s got the wrong god.