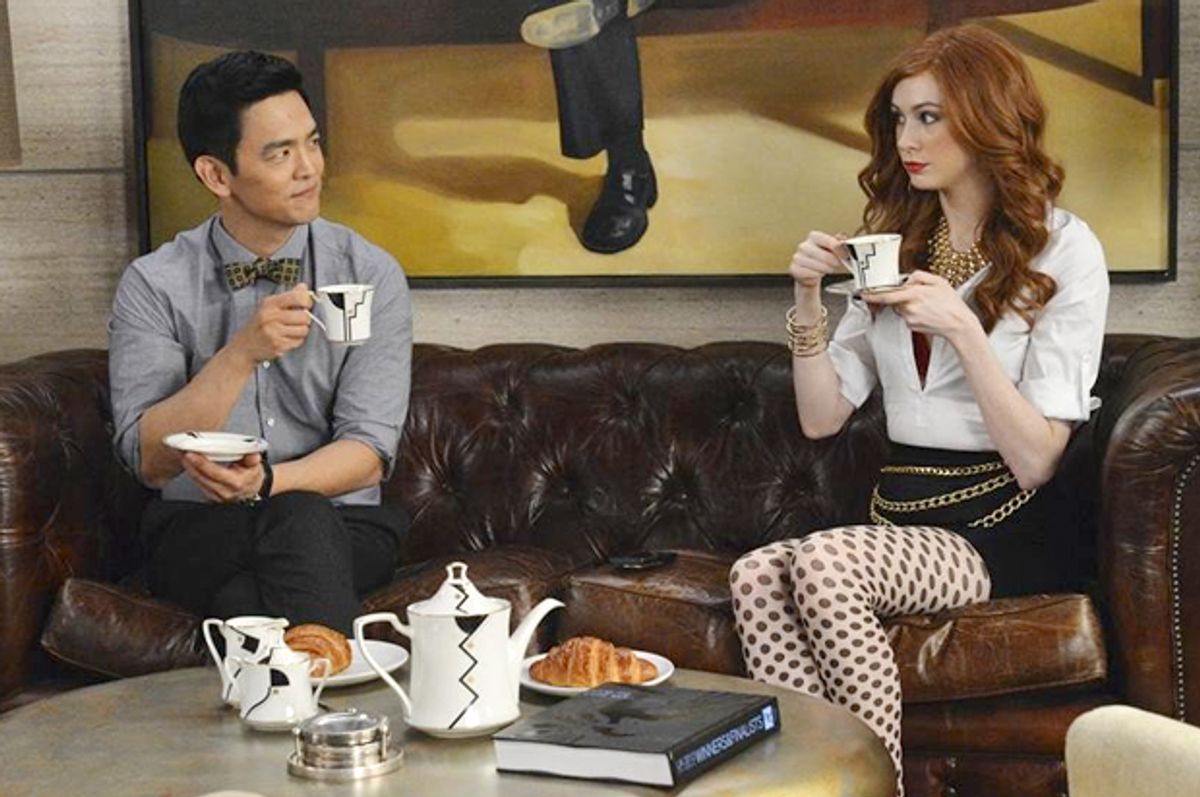 Nothing on broadcast TV (except for live events and dramas that approximate live events) is doing too well, but comedies are doing worst of all; the audience fragmentation that's caused the four major networks to collapse in the ratings seems to have especially impacted comedies. Isn't what one finds funny the most particular signifier of taste, after all? Even CBS, which has lately been the one network to put together a successful slate of sitcoms with the likes of "The Big Bang Theory" and "Two and a Half Men," saw diminished returns last season with the underwhelming likes of "The Millers"; the network's classic formula (multiple cameras, crass humor with a bit of "heart") isn't quite connecting anymore. If they can't do it anymore, maybe no one can.

And the anxiety is palpable in the shows themselves. Sitcoms in the new season are attempting to draw in viewers by making contemporary-seeming jokes about the Internet, but in the process are only revealing their own cluelessness.

The worst offender is ABC's "Selfie," which premieres Sept. 30. The show takes as its framing device Eliza, a social-media-obsessed millennial (played by Karen Gillan) with sincere desire to change her ways. She wants, we're told, to stop texting and Instagramming so very much. The argument the show's making is embarrassingly simplistic -- in short, it asks what we've lost in our reliance on social media, what human connection is missing. John Cho's character, a co-worker who takes it upon himself to be the Henry Higgins to Eliza's, er, Eliza, only does so after a series of lectures about how narcissistic millennials are. It may be true and it may be false, but more than anything it feels utterly tired.

Other aspects of the show do ring false: For many viewers, social media facilitates, rather than inhibits, human connection. The protagonist of "Selfie" is constantly getting online Likes and Favorites from people she seems never to have met and has no real friends; for a certain class of Internet ultra-celebrity, this may be true, but the majority of Facebook and Instagram users are keeping in touch with their friends. Whether the bubble effect this promotes is good or bad is another question, but it's a less loaded one than whether using the Internet to communicate with the world makes one a de facto sociopath. Cho, playing the thuddingly named Henry Higginbotham, instructs Eliza to greet a co-worker by asking her how she'd slept the night before. What? That's far more overshare-y than anything that's ever been put on most active Twitter users' feeds. If this is the sort of real-world interaction that's been elided by social media, then ... frankly, that's a good thing. Sites like Twitter and Facebook allow their users to meaningfully connect in a manner that in no way obviates chatting idly with co-workers -- and if it forecloses deep talk about sleep patterns that borders on workplace harassment, so much the better?

"Manhattan Love Story" and "A to Z," both on NBC, hardly do much better. On the former, a clueless young woman played by Analeigh Tipton enters her blind date's name into Facebook as a status update by mistake, and seems stymied and befuddled as to how to take it down. Later in the episode, the object of her affection watches at home as she changes her relationship status back and forth between "In a relationship" and "Single." OK, cute, but any 20-something would avoid these garden-variety missteps, which play on the absolute most basic level of knowledge about the fundamentals of Facebook. They're not per se wrong -- there are relationship statuses on Facebook, as well as the possibility of accidentally entering a search term into a status bar. But just presenting those with no real commentary is the equivalent of a comic saying "Facebook ... am I right?" before shrugging.

And on "A to Z," the "A" (Andrew) meets his "Z" (Zelda) when she comes into his place of work, a dating website whose founder is obsessed with making sure that couples don't end up together to ensure they keep their accounts open. This seems like a wild misunderstanding of how dating sites stay successful (what positive word-of-mouth can this site possibly have?) and another too-easy punch line based on the simple facts of the case (dating websites ... exist, and are addictive). It's hard to imagine what good jokes could be made about dating sites. But in just scorning their very existence, "A to Z" makes the same mistake "Selfie" does -- mistaking nihilism about our digital reality with insight.