Giffords scores big win vs. NRA: How her "mean" ads swayed a Republican

The ex-congresswoman's super PAC has been criticized for its tough ads. But those ads are making progress 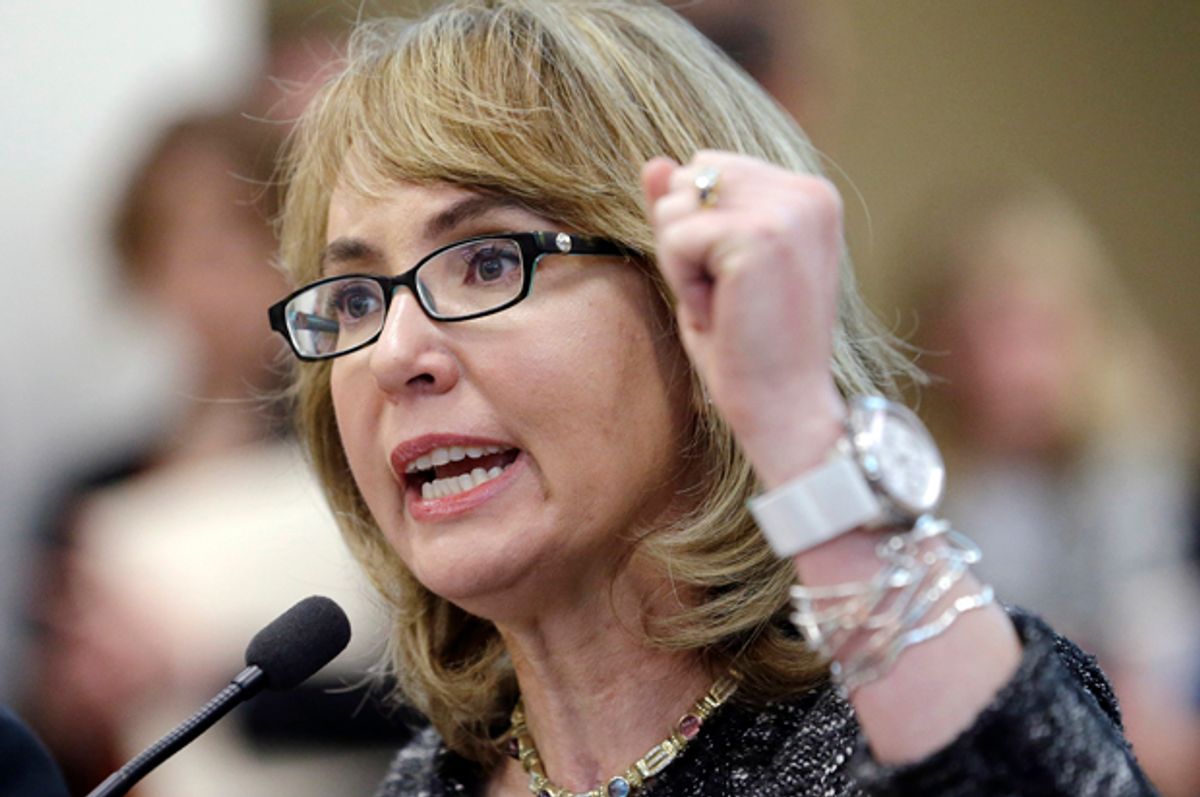 Americans for Responsible Solutions, the gun issues super PAC started by former Rep. Gabrielle Giffords, has decided to take down its tough ad that's been criticized locally and nationally as "vile," "disgusting," "mean," "ruthless," and -- worse yet! -- threatening to Giffords' reputation as a heroic Civility Unicorn who makes us all feel better about ourselves. The ad, which criticized Arizona congressional candidate Martha McSally for objecting to legislation that would bar convicted stalkers from purchasing firearms, depicted a mother, Vicki, telling the story of her daughter being shot to death by a vengeful ex-boyfriend. In other words, it was "vile" because it forced people to confront a possible outcome of lax gun control policies.

But ARS isn't pulling the plug on the ad (24 hours before its run was already scheduled to end) as a concession to Victorian sensibilities about the impoliteness of describing reality. It's doing it because the ad was effective enough to get Martha McSally to change her mind. In other words, the ad that found so many of our decency-defining political writers succumbing to their fainting couches... got results.

McSally has run a typical Republican campaign on gun issues, arguing that no new federal restrictions are needed. "Our focus for preventing shootings should be on strengthening our mental health system and enforcing background check laws already on the books," she said in April, "not expanding those laws that will do little to prevent violence and infringe on the rights of law abiding citizens." And "when asked how much she supported the goals of the National Rifle Association on a scale from one to 10," Tucson Weekly writes, "McSally told a crowd of Republican supporters earlier this year that she saw herself as a 10."

So what are the stalking laws already "on the books"? In Arizona, stalking is a felony, and convicted felons aren't allowed to purchase guns from licensed dealers. But McSally is running for federal office, and, in a lot of states, stalking is only a misdemeanor, and those convicted stalkers aren't barred from purchasing guns.

Democratic Sen. Amy Klobuchar introduced a bill earlier this term that, among other things, would have closed the so-called "stalker gap" and placed those convicted of misdemeanor stalking on the federal prohibited possessor list. The bill went nowhere, because no legislation that even marginally restricts the sale of firearms ever goes anywhere in Congress. The "mean" ad against Martha McSally was attacking her for not supporting legislation that would have closed the "stalker gap."

In a statement yesterday, McSally's team claimed that she was "never asked" by ARS what her position on this stalker legislation was. Well, her position was pretty clear that she didn't support "expanding" existing gun laws, opting instead to focus on "enforcing background checks already on the books." So her campaign announced that McSally now "supports adding misdemeanor stalking to the list of criminal offenses that would keep dangerous individuals from obtaining guns in other states where stalking can also be a misdemeanor."

That's a big deal, and probably something that never would have come about had ARS not called out her position. Although it seems like a no-brainer to restrict convicted stalkers of all stripes from purchasing firearms, the National Rife Association disagrees. Remember how Klobuchar's bill went nowhere? That's partly because the NRA vocally opposed it. In its position statement, the NRA mocked the the very idea of misdemeanor stalking laws while wrapping itself in the First Amendment:

“Stalking” offenses do not necessarily include violent or even threatening behavior. Under federal law, for example, stalking includes “a course of conduct” that never involves any personal contact whatsoever, occurs wholly through the mail, online media, or telephone service, is undertaken with the intent to “harass” and would be reasonably expected to cause (even if it doesn’t succeed in causing) “substantial emotional distress” to another person. The federal stalking law is so broadly written that some constitutional scholars even claim it could reach speech protected under the First Amendment.

McSally, who'd previously described herself as a 10 on the 1-10 scale of total adherence to the NRA's wishes, deserves some credit for going against the gun lobby's line on this particular issue -- even if the announcement came a bit late, and although she has yet to endorse closing background check loopholes for Internet and gun show sales. Those who screeched about the incivility of ARS' ads should consider the fruit that those ads bore: we have a Republican congressional candidate now supporting a gun control measure that, however modest, is strongly opposed by the National Rifle Association. It's as if there's a mismatch between common sense and the NRA's firearm maximalism and, when that's pointed out in stark terms, progress can be made.