Are condoms killing you? This new contraceptive company wants you to think so

Salon asks experts about the study, funded by Sustain, highlighting other birth control brands with carcinogens 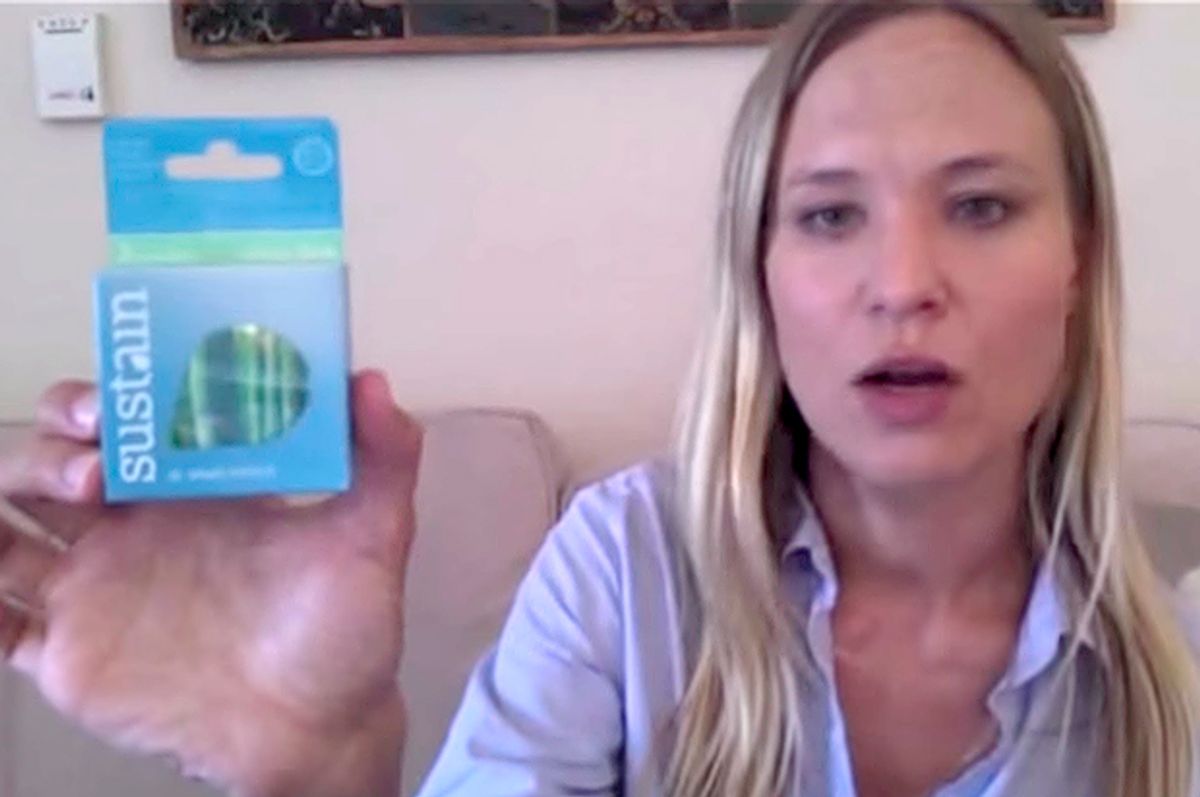 "Are Condoms Killing You" -- no question mark. That was the title of a YouTube video tweeted earlier this month by social media account for the condom brand Sustain. The clip, which was made by sexual coach Lauren Brim, claims that the condom market is flooded with products with “very high carcinogen levels" that raise "the risk of a woman having problems in her reproductive system -- cervical issues, ovarian cancer.” The Sustain tweet called the video “incredible and important."

This might seem an odd move from Sustain, the latest entrant to the crowded condom market -- until you realize that the company is pointing its finger at other popular, well-established brands. In fact, a recently released white paper by Reproductive Health Technologies Project (RHTP) and Center for Environmental Health (CEH) tested 24 different types of latex condoms and found that 16 contained at least one kind of nitrosamine, a carcinogenic chemical compound. The research was funded by Jeffrey Hollender, the co-founder of Sustain, which the paper reported had no detectable levels of nitrosamines.

If you’ve ever found yourself at Whole Foods trying to distinguish between a wall of eco-friendly cleaning products, you’re probably familiar with Hollender’s previous endeavor: Seventh Generation, of which he is a co-founder and former board member. Now, the entrepreneur has shifted his focus from household products to contraceptives. Just as with Seventh Generation, Sustain's business relies on highlighting potentially toxic chemicals in other brands. Only, the stakes here are different: Whether one uses laundry detergent when washing clothes isn’t a pressing public health issue. It leads to a cleaner and nicer smelling world, sure, but that hardly compares to the potential consequences of forgoing condoms -- say, an unintended pregnancy or an incurable sexually transmitted infection.

That's exactly what worries sexual health advocates. Former Surgeon General Joycelyn Elders said in a statement provided by Trojan, "Any public statement calling into question the safety of latex condoms, given the mountain of evidence supporting their safe and effective use, simply is not credible. Consumers should continue using condoms to prevent unintended pregnancies, HIV, and other sexually transmitted infections — and they should remain confident that condoms are safe and effective."

Bill Smith of the National Coalition of STD Directors, which has partnered with Trojan -- one of the brands shown to have detectable nitrosamine levels -- and other condom companies to promote safer sex, agreed. "Our largest concern with the release of this document is that we think anything like this that undermines consumer confidence in the protective nature of condoms is not good," said Smith. "That is a huge concern for us, because we’re seeing increased incidents in certain populations of the number of STDs -- gonorrhea, syphilis and HIV. There are so many nuanced messages in this study that we’re worried most readers will take away the top-line that condoms contain carcinogens."

I informed Hollander of these criticisms and he told me,"I think consumers deserve the right to know what’s in the products they’re buying. I don’t think anyone who’s bought a condom ever knew that this chemical was there in the first place. They were really deprived of making that choice."  He added, "The last thing we want anyone to do is to stop using condoms."

This isn't the first time that an alarm has been rung about nitrosamines in condoms. A 2004 German study by the Chemical and Veterinary Investigation Institute tested 32 types of condoms and found nitrosamines in 29 of them; it concluded by calling for more research. The report was seized on by anti-contraception right-wingers, including, by the way, one blogger who commented on the finding with a quote attributed to Jesus: "We warned you over and over again, through years of visitations upon earth ... that those who have given themselves over to debasement, by the practice of homosexuality, birth control, abortion and all other aberrations that bring sorrow to My Mother's heart--this must be stopped now."

On a more scientific note, I contacted Morgan Liscinsky, a spokesperson for the FDA. "There is no consensus in the scientific community on appropriate levels of nitrosamines in condoms," said Liscinsky. "In general, condoms have a low level of nitrosamines, and the risk for the induction of tumors from nitrosamines in condoms is very low," she said, citing a 2001 scientific study. Indeed, the study concluded that “epidemiological studies do not support a role for condoms in the induction of cancer” and that “humans are regularly exposed to nitrosamines from food and tobacco smoke at a dose which is 1,000 to 10,000 fold higher than expected from condom use.” Liscinsky added that it's the belief of the FDA’s Center for Devices and Radiological Health "that the public health benefits of condoms ... outweigh the potential risks of exposure to nitrosamines."

In particular, the RHTP and CEH white paper calls out Glyde, Nuvo, One, Playboy, Sir Richard's and Trojan for producing condoms with nitrosamine levels above the European Union's standards for acceptable amounts of the chemical in children's toys. Although the paper itself notes that this comparison isn't ideal. "For one, the EU standard is targeted to children, a population that may be at higher risk because of rapid developmental changes. Moreover, the standard is primarily concerned with oral exposure. ... While condoms are sometimes used for oral sex, a more common exposure is dermal or epithelial." Thus, the authors note, "We recognize that the comparison of nitrosamines released in testing to these standards is not perfect."

As you might expect, the condom companies shown to have detectable levels of nitrosaminess are none too thrilled by the paper. In a statement to Salon, a Trojan spokesperson said their brand of condoms "have been and remain safe for use." She added, "It’s important to note that the U.S. FDA has strict rules about manufacturing standards for medical devices such as condoms. Studies have found that nitrosamine levels in condoms are generally several orders of magnitude less than the nitrosamines consumers ingest routinely and safely in foods such as milk, cheese, some meats and beer."

Earlier this month, after Sustain promoted the YouTube video mentioned earlier, GLYDE's Twitter account tweeted, "What's more toxic - nitrosamines or scare tactics in marketing that result in discouraging women from practicing #safesex with #condoms?" In a statement, the company told Salon, "GLYDE has been selling ethically produced condoms for over twenty years, and we've always taken steps to reduce nitrosamines to negligible levels." A spokesperson said that "the numbers reflected in this report, while still way below [European Union] standards, do not correspond to previous tests performed by a third party laboratory and submitted to us by our manufacturing facility, therefore, we are concerned about the methodology" -- before going on to note where the white paper received its financing.

Not all of the condom companies cited as having nitrosamines are unhappy with the paper, though. Nicholai Allen, vice president of United Medical Devices, which produces Playboy Condoms, told me that prior to the paper's publication, the company eliminated nitrosamines from its entire line of condoms. "If [the paper] can help convince other manufacturers to also go nitrosamine free, then we're happy," he said.

That is certainly Hollander's position. "Sustain’s mission," he said, "is to do everything we can to reduce any exposure to any chemical that is suspected of being potentially harmful."