He fought police abuse and voter suppression, while prosecuting leakers. But even liberal critics will miss him 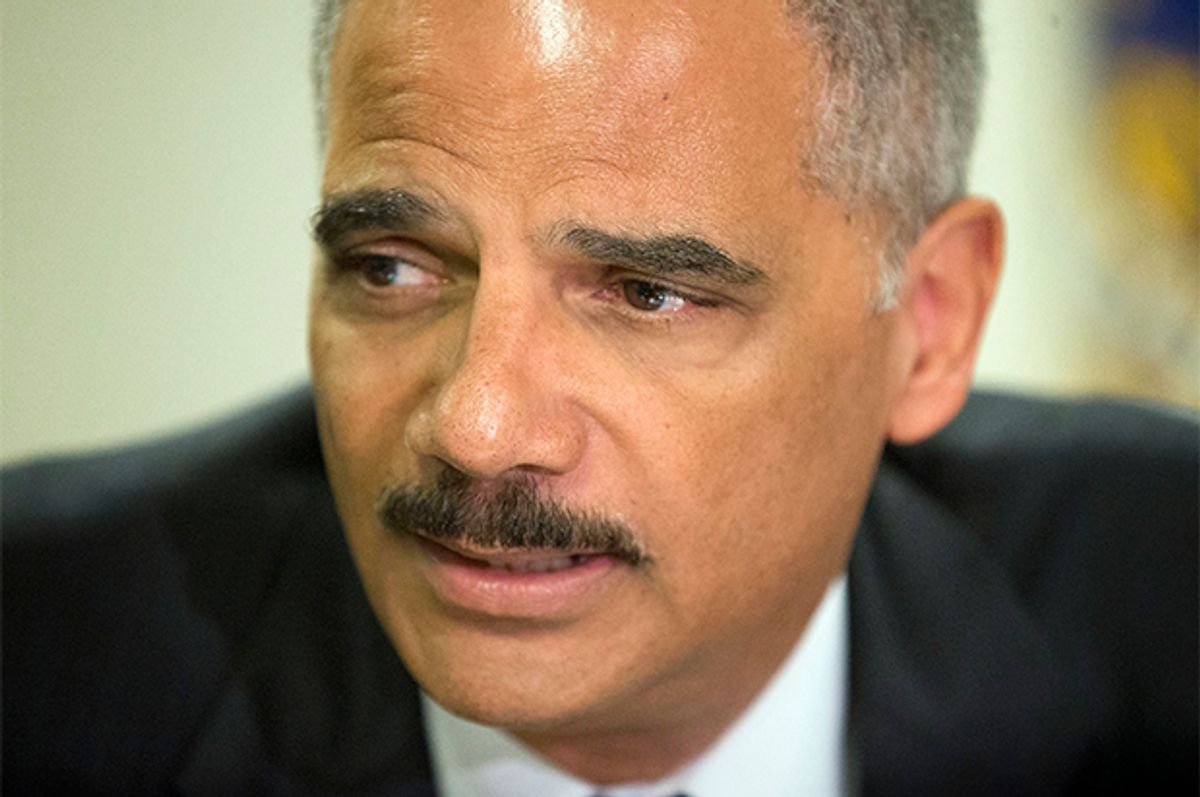 Eric Holder’s legacy is going to be as complicated as that of the man he served, and perhaps more so, because personally, he has always seemed to stand to President Obama’s left. Or at least to stand for a more aggressive approach to the social justice issues he cared about.

He was brash when Obama was circumspect, calling us (correctly) “a nation of cowards” when it comes to race, and shooting back at his rabid right-wing critics, who treated the attorney general as a stand-in for our first black president and kicked him more viciously, since they didn’t even have to pretend to respect the office of the presidency when they faced him.

The first Cabinet member in history to be held in contempt by the House of Representatives, Holder was unbowed. He modeled backbone for frequently spineless Democrats, telling House oversight bully Darrell Issa that his behavior was “unacceptable … and shameful,” and warning Louie Gohmert, “You don’t want to go there, buddy,” when Gohmert mocked him about being found in contempt.

His courage wasn’t just rhetoric: He took the lead (with Obama’s blessing) on issues of crucial importance to African-Americans, and to everyone concerned about civil rights: the long-festering problem of police violence, lately an epidemic, and the erosion of voting rights in the wake of Obama’s 2008 election.

But his legacy will also be defined by his work to defend the parameters of the Obama national security state, from standing behind unprecedented legal action against reporters, to this week taking the lead in defending the mysterious U.S. attack on the relatively unknown Khorasan Group by insisting the al-Qaida affiliate had been caught planning attacks here over the summer. That’s not to say Holder fabricated or exaggerated evidence, but he put his own credibility with Obama’s liberal base on the line with the move.

Holder’s departure is long expected, but it comes at a fraught time, which also complicates thinking about his legacy. The crisis of police misconduct, and violence against black men in particular, is at a boil, with the killings of Eric Garner, Mike Brown and John Crawford III all in the last few months, plus yesterday’s caught-on-camera savagery in South Carolina, when a cop shot at a black man reaching for his identification as he’d been asked to do. (That officer was promptly fired and charged with assault; the others so far have faced no charges.)

Under Holder the Justice Department has been aggressive lately in taking up the issue, and it’s hard not to worry that investigations into those cases could lose urgency. Just last night his office announced it would investigate Crawford’s shooting, after an Ohio grand jury declined to charge the police who shot the young father as he held a toy gun in Wal-Mart.

The other crucial issue that has distinguished Holder’s tenure, his campaign on behalf of voting rights – or specifically, his effort to beat back GOP voter suppression – comes to a head in November, as new voting rights restrictions could decide close contests in states like Wisconsin, Georgia and North Carolina. It’s hard to see Holder leave with that work so dramatically unfinished.

Yet that work is likely to be unfinished for a long time, as Republicans give up on widening their appeal to the electorate, and settle for narrowing the electorate itself.  On Twitter, the Advancement Project co-director Judith Browne Dianis called Holder’s departure “devastating news” but predicted the Justice Department “will continue his work.”

It’s strange to see Holder announce his departure as the president commences an undeclared war on ISIS, one that the administration insists doesn’t require congressional approval. As much as courageous and innovative work on police violence and voting rights will define Holder’s legacy, as well as Obama’s, so will the president’s maintaining a doctrine of presidential power that has much in common with Dick Cheney’s.

On certain national security issues Holder tried to keep civil liberties in focus, but he got rolled by White House political team, most notably when he pushed to try high-profile terror suspects in federal court, not in military tribunals, back in 2010. He was also a staunch defender of moves to close Guantánamo prison, which was blocked by Congress. Since then he has dutifully defended the administration’s muscular claims on issues of security and secrecy, most disturbingly when he personally signed off on warrants for the records of Fox News reporter James Rosen, on the grounds that he could be a criminal co-conspirator when reporting leaked national security secrets.

More recently, he seemed to back off on efforts to force New York Times reporter James Risen to turn over notes in the case of accused CIA leaker Jeffrey Sterling, saying he won’t seek to jail Risen, while pledging to continue to prosecute Sterling.

There’s no reason to expect Holder’s successor to be any more resistant to the president’s exercise of power. We can hope he or she is just as committed to curbing police abuse and protecting voting rights. Obama is expected to nominate a successor later today. There is reason to doubt that anyone as liberal as Holder could be confirmed right now.