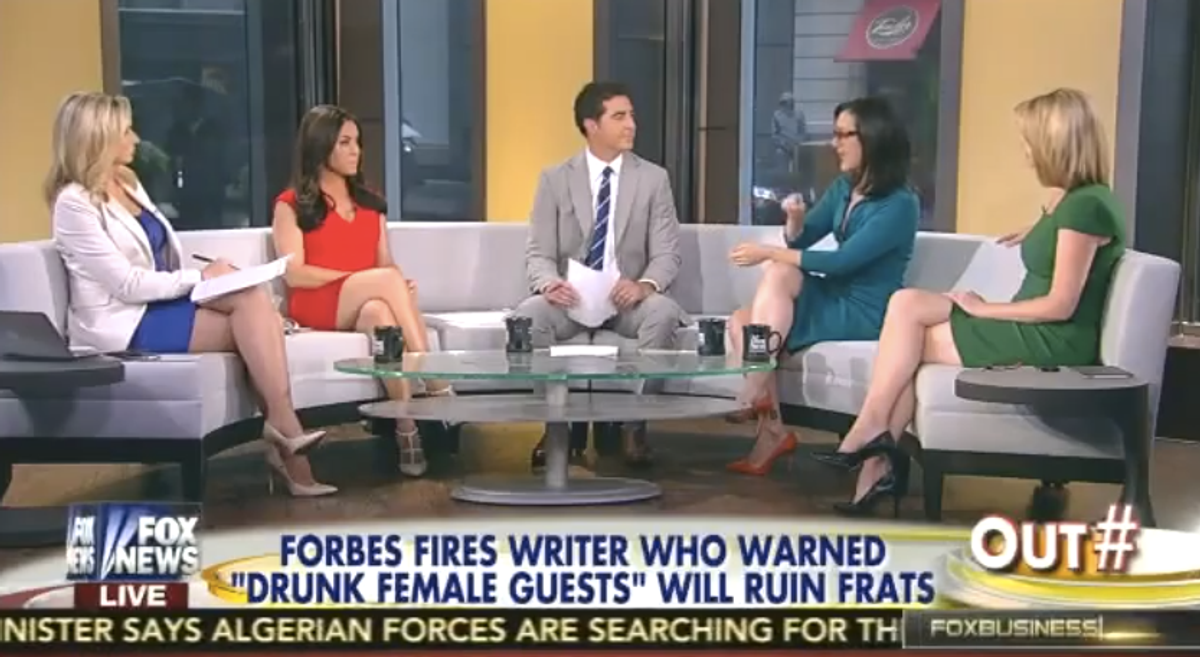 On Wednesday, Forbes columnist and fraternity corporation president Bill Frezza found himself at the center of a social media firestorm over his inflammatory post -- which was subsequently taken down -- titled "Drunk Female Guests Are the Gravest Threat to Fraternities." Backlash was so fierce that, before the end of the day, Frezza was fired. The piece stated that fraternities "have very little control over women who walk in the door carrying enough pre-gaming booze in their bellies to render them unconscious before the night is through," and suggested that intoxicated women should bear some "personal responsibility" for getting sexually assaulted by frat boys.

Despite the suggestion being overwhelmingly panned, several of the hosts on Fox News' Outnumbered agreed with Frezza. A fear of drunk girls holding fraternities liable for sexual assault is "legitimate," according to co-hosts Andrea Tantaros and Kirsten Powers.

"I don't know why this writer is taking so much heat, because this is actually a problem that goes on," Tantaros said. "These girls show up at these fraternity houses, and the guys -- what are they supposed to do? Lock them out? ... It is a legitimate fear."

Well, locking women out is "exactly" what co-hosts Kennedy Montgomery and Sandra Smith agreed should happen, but doesn't because -- as Frezza pointed out in his article -- fraternities don't have policies in place to prevent inebriated guests from entering their houses. "If you're worried about liability, do what an airline would do," Montgomery suggested. "They either don't let drunk people on the plane, or, if you've already been served, they're not going to serve you anymore."

Tantaros conceded that there might be a wee issue of "girls getting too drunk and men taking advantage of them." But she went on to say that the liability issue doesn't have to do with letting female guests into parties where they'll be sexually assaulted -- it has to do with "personal responsibility" for everyone getting so drunk!

(Indeed, it's "not really like that," because all too often men mistake a woman's attire, drunkenness and/or lack of consciousness as signs that it might be alright to have sex with her without consent, which they never are. Women should be able to wear whatever they want and drink as much as they want without the threat of being sexually assaulted -- and that would be a whole lot more likely to happen if frat boys didn't rape them at frat parties!)

Powers agreed with Tantaros' point that personal responsibility is not expected of women as it is of men. “It makes the drunk girl completely clean no matter what happens," Powers said. "Again -- we have to say it because some cuckoo person is going to start blogging how we are supporting women getting raped, which we do not support, and she is not guilty or any of those things. But the point is that the drunk woman is — she’s just not held accountable for anything. The drunk guy, however, is supposed to make all these amazingly perfect decisions, and not make any mistakes.”