Local cops were trained to immediately “engage” an “active shooter” suspect. But a dishonest witness set him up 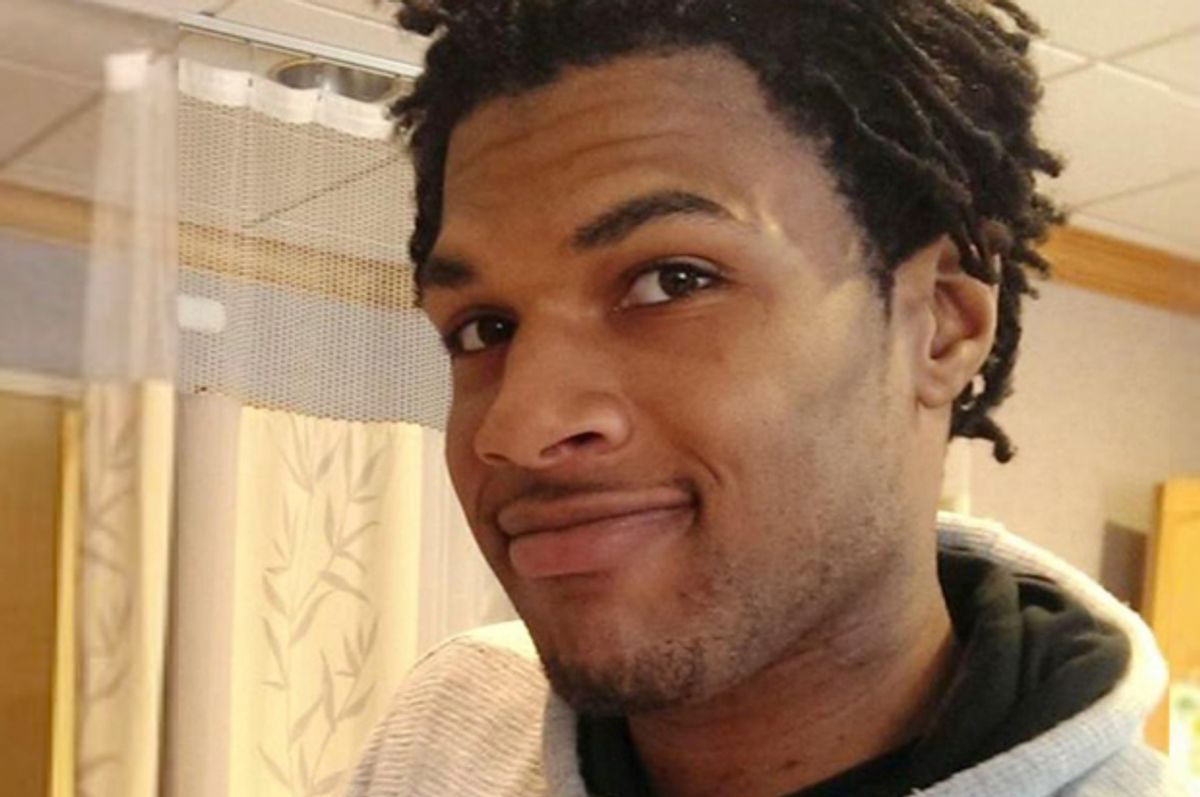 Another day, another troubling video of police killing an unarmed black man . Or so it seems. But the horrific South Carolina video released Wednesday, in which a cop shot Levar Jones while he was reaching for his license, as he was asked to do -- was the first recent case in which the officer was disciplined: not only fired, but charged with assault, appropriately.

Stark video evidence helps account for the difference in the treatment of Jones’s police assailant and the cops who shot Mike Brown in Ferguson, choked Eric Garner in Staten Island and gunned down Ezell Ford in Los Angeles. But what about John Crawford III, the young father shot by police in a Beavercreek, Ohio Walmart holding a toy gun? Newly released video is almost as stark as in the Jones case. It shows the police opened fire on Crawford immediately, even though the gun he held was fake and he wasn’t pointing it at anyone. Yet a grand jury declined to bring charges against the officers involved.

There are two main reasons for that. One, a young white wannabe Marine, 24-year-old Ronald Ritchie, lied to a 911 dispatcher and claimed Crawford was pointing his gun at other shoppers, including children. He would later, in a television interview, make the false claim that Crawford had also aimed the gun at police. Ritchie should clearly be prosecuted.

But another reason the cops weren’t charged is the fact that they did exactly what they were trained to do, from authorities starting with Ohio’s Republican Attorney General Mike DeWine. The Guardian’s Jon Swaine got ahold of a Power Point used to train Beavercreek police officers, just two weeks before they killed Crawford, in what to do when faced with an “active shooter threat.”

It essentially tells them to shoot first – I’m sorry, I mean “engage” first -- and ask questions later, as they did in Crawford’s case.

The training manual, “Single Officer Response to Active Shooter Threats: What to do when YOU are first on the scene,” emblazoned with DeWine's name, boasts of the way police departments have changed their protocols when facing cases like Crawford’s. From 1966 through 1999, the Power Point explains, “patrol officers respond by locating the shooter, containing the suspect, evacuating the area” and “notifying the SWAT team.” That sounds awfully soft on crime.

From there to 2008, the response was a little sharper, but it still emphasized “containment.” Then in 2008, the approach shifted. Suddenly “officers are empowered to engage the active threat upon arrival,” without waiting for backup. It cites FBI studies showing that active shooter event normally last 3-4 minutes, but “average time per kill/injury is 15 seconds.” Clearly, officers have to act fast.

In case that message was lost on anyone, the presentation closed with two slides. One asked what the trainees would police to do in case of an active threat in a building “with the one I love the most:” Wait for backup, “or enter the building and engage the suspect as soon as possible.” Then came a photo of a teacher leading tiny children to safety at Sandy Hook in December, 2012.

Is it any wonder Beavercreek officer Sean Williams charged into Walmart, wearing protective gear, with his gun aimed at Crawford, who was talking on his cell phone and holding the toy gun at his side? A witness later said he heard the police “yell and shoot simultaneously.”

“I believe that had he been white, the tolerance level of the officer involved realistically would have probably been more favorable,” John Crawford Jr told Swaine about his son. Crawford also told Swaine that he thought the 911 call claiming his son had been menacing, pointing the gun at other shoppers, wouldn’t have been made if he was white.

We’ll never know for sure, but that sure seems to be the case. I only just watched the television news interview Ronald Ritchie gave on the day of the shooting, back when he was presumed to be a hero. He looks so pleased with himself, sharing how “a black gentleman…was just waving [the gun] at children and people...I couldn't hear anything that he was saying. I'm thinking that he is either going to rob the place or he's there to shoot somebody else.”

Ritchie claimed the police told Crawford to drop the gun, twice, but Crawford “decided to swing the rifle to the officers, pointing at them, and that’s when the officer shot him twice.” When the Crawford family and their attorneys got a look at the surveillance video – it wasn’t released until after the grand jury decision – they said it was clear John Crawford never pointed the gun at anyone. Now that the video is public, we know that is true.

So Ritchie recanted his story, in an interview with Swaine: “At no point did he shoulder the rifle and point it at somebody,” he said. But it was too late: His false story set in motion the sped-up response laid out in “Single Officer Response to Active Shooter Threats.”

The reaction to Mike Brown’s shooting in Ferguson focused the country on the militarization of local police departments. John Crawford III’s killing should do the same with their terrible training. And Ronald Ritchie's false 911 report should make us realize that the racism that led Ritchie to either cruelly lie about Crawford, or to somehow see a menace where none existed, is deadly too.