Rotten to the Core: How an Apple mega-deal cost Los Angeles classrooms $1 billion

Bad business and worse ethics? A scandal is brewing in L.A. over a sketchy intiative to give every student an iPad 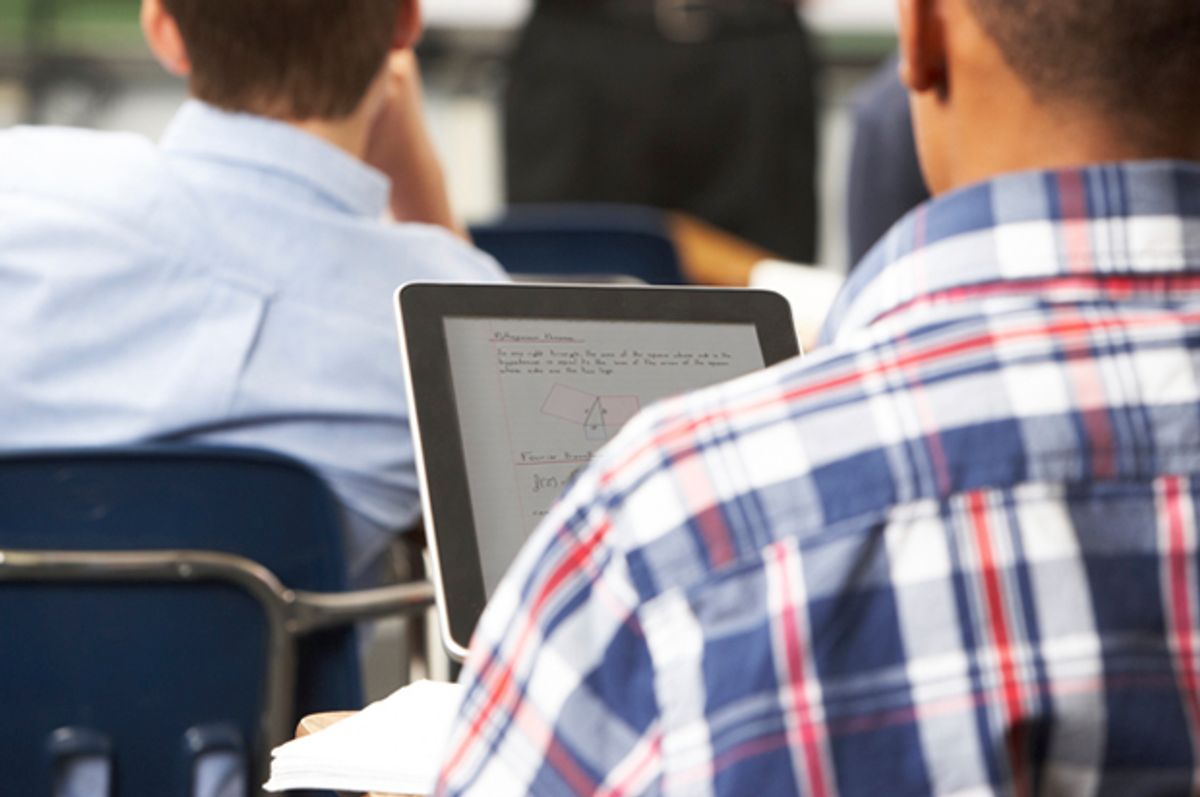 Technology companies may soon be getting muddied from a long-running scandal at the Los Angeles Unified School District (LAUSD), the nation’s second-largest system. A year after the cash-strapped district signed a $1 billion contract with Apple to purchase iPads for every student, the once-ballyhooed deal has blown up. Now the mess threatens to sully other vendors from Cambridge to Cupertino.

LAUSD superintendent John Deasy is under fire for his cozy connections to Apple. In an effort to deflect attention and perhaps to show that “everybody else is doing it,” he’s demanded the release of all correspondence between his board members and technology vendors. It promises to be some juicy reading. But at its core, the LAUSD fiasco illustrates just how much gold lies beneath even the dirtiest, most neglected public schoolyard.

As the U.S. starts implementing federal Common Core State Standards, teachers and administrators are being driven to adopt technology as never before. That has set off a scramble in Silicon Valley to grab as much of the $9 billion K-12 market as possible, and Apple, Google, Cisco and others are mud-wrestling to seize a part of it. Deasy and the LAUSD have given us ringside seats to this match, which shows just how low companies will go.

When the Apple deal was announced a year ago, it was touted as the largest ever distribution of computing devices to American students. The Los Angeles Times ran a story accompanied by a photograph of an African-American girl and her classmate, who looked absolutely giddy about their new gadgets. Readers responded to the photo’s idealistic promise -- that every child in Los Angeles, no matter their race or socioeconomic background, would have access to the latest technology, and Deasy himself pledged “to provide youth in poverty with tools that heretofore only rich kids have had.” Laudable as it was, that sentiment assumed that technology would by itself save our underfunded schools and somehow balance our inequitable society.

When I heard about the deal, I felt a wave of déjà vu. I had sat in a PTA meeting at a public school listening to a similar, albeit much smaller, proposed deal.  An Apple vendor had approached administrators in a Santa Barbara County school, offering to sell us iPads. The pitch was that we could help propel our kids into the technological age so that they’d be better prepared for the world, and maybe land a nice-paying, high-tech job somewhere down the line. Clearly, a school contract would be great for Apple, giving it a captive group of impressionable 11-year-olds it could then mold into lifelong customers.

But parents had to raise a lot of money to seal this deal. “Is Apple giving us a discount?” asked a fellow PTA member. No, we were told. Apple doesn’t give discounts, not even to schools. In the end, we decided to raise funds for an athletics program and some art supplies instead.

To be fair, PTA moms and dads are no match at the bargaining table for the salespeople at major companies like Google, and Hewlett-Packard. But the LAUSD, with its $6.8 billion budget, had the brains and muscle necessary to negotiate something valuable for its 655,000 students. That was the hope, at least.

Alas, problems began to appear almost immediately. First, some clever LAUSD students hacked the iPads and deleted security filters so they could roam the Internet freely and watch YouTube videos. Then, about $2 million in iPads and other devices went “missing.” Worse was the discovery that the pricey curriculum software, developed by Pearson Education Corp., wasn’t even complete. And the board looked foolish when it had to pay even more money to buy keyboards for iPads so that students could actually type out their reports.

Then, there was the deal itself. Whereas many companies extend discounts to schools and other nonprofits, Apple usually doesn’t, said George Michaels, executive director of Instructional Development at University of California at Santa Barbara. “Whatever discounts Apple gives are pretty meager.” The Chronicle of Philanthropy has noted Apple’s stingy reputation, and CEO Tim Cook has been trying to change the corporation’s miserly ways by giving $50 million to a local hospital and $50 million to an African nonprofit.

But the more we learned about the Apple “deal,” the more the LAUSD board seemed outmaneuvered. The district had bought iPad 4s, which have since been discontinued, but Apple had locked the district into paying high prices for the old models. LAUSD had not checked with its teachers or students to see what they needed or wanted, and instead had forced its end users to make the iPads work. Apple surely knew that kids needed keypads to write reports, but sold them just part of what they needed.

Compared with similar contracts signed by other districts, Apple’s deal for Los Angeles students looked crafty, at best. Perris Union High School District in Riverside County, for example, bought Samsung Chromebooks for only $344 per student. And their laptop devices have keyboards and multiple input ports for printers and thumb drives. The smaller Township High School District 214 in Illinois bought old iPad 2s without the pre-loaded, one-size-fits-all curriculum software. Its price: $429 per student.

But LAUSD paid Apple a jaw-dropping $768 per student, and LAUSD parents were not happy. As Manel Saddique wrote on a social media site: “Btw, thanks for charging a public school district more than the regular consumer price per unit, Apple. Keep it classy…”

By spring there was so much criticism about the purchase that the Los Angeles Times filed a request under the California Public Records Act to obtain all emails and records tied to the contract. What emerged was the image of a smoky backroom deal.

Then-Deputy Superintendent Jaime Aquino had once worked at Pearson, the curriculum developer, and knew the players. It turned out that Aquino and Deasy had started talking with Apple and Pearson two years before the contract was approved, and a full year before it was put out to bid. The idea behind a public bidding process is that every vendor is supposed to have the same opportunity to win a job, depending on their products, delivery terms and price. But emails show that Deasy was intent on embracing just one type of device: Apple’s.

Aquino went so far as to appear in a promotional video for iPads months before the contracts were awarded. Dressed in a suit and tie, the school official smiled for the camera as he talked about how Apple’s product would lead to “huge leaps in what's possible for students” and would “phenomenally . . . change the landscape of education.” If other companies thought they had a shot at nabbing the massive contract from the influential district, this video must have disabused them of that idea.

At one point, Aquino was actually coaching software devloper Pearson on what to do: “[M]ake sure that your bid is the lower one,” he wrote. Meanwhile, Deasy was emailing Pearson CEO Marjorie Scardino, and effusively recounting his visit with Apple’s CEO. "I wanted to let you know I had an excellent meeting with Tim at Apple last Friday ... The meeting went very well and he was fully committed to being a partner ... He was very excited.”

If you step back from the smarmy exchanges, a bigger picture emerges. Yes, LAUSD is grossly mismanaged and maybe even dysfunctional. But corporations like Apple don’t look so good, either. Google, Microsoft, Facebook, Apple, Hewlett Packard — the companies that are cashing in on our classroom crisis are the same ones that helped defund the infrastructure that once made public schools so good. Sheltering billions of dollars from federal taxes may be great for the top 10 percent of Americans, who own 90 percent of the stock in these corporations. But it’s a catastrophe for the teachers, schools and universities that helped develop their technology and gave the companies some of its brightest minds. In the case of LAUSD, Apple comes across as cavalier about the problem it’s helped create for low-income students, and seems more concerned with maximizing its take from the district.

But the worst thing about this scandal is what it’s done to the public trust. The funds for this billion-dollar boondoggle were taken from voter-approved school construction and modernization bonds -- bonds that voters thought would be used for physical improvements. At a time when LAUSD schools, like so many across the country, are in desperate need of physical repairs, from corroded gas lines to broken play structures, the Apple deal has cast a shadow over school bonds. Read the popular “Repairs Not iPads” page on Facebook and parents’ complaints about the lack of air conditioning, librarians and even toilet paper in school bathrooms. Sadly, replacing old fixtures and cheap trailers with new plumbing and classrooms doesn’t carry the kind of cachet for ambitious school boards as does, say, buying half-a-million electronic tablets. As one mom wrote: “Deasy has done major long-term damage because not one person will ever vote for any future bond measures supporting public schools.”

Now, the Apple deal is off, although millions of dollars have already been spent. An investigation into the bidding process is underway and there are cries to place Deasy in “teacher jail,” a district policy that keeps teachers at home while they’re under investigation. And LAUSD students, who are overwhelmingly Hispanic and African-American, have once again been given the short end of the stick. They were promised the sort of “tools that heretofore only rich kids have had,” and will probably not see them for several years, if ever. The soured Apple deal just adds to the sense of injustice that many of these students already see in the grown-up world.

Deasy contends that that he did nothing wrong. In a few weeks, the public official will get his job performance review. In the meantime, he’s called for the release of all emails and documents written between board members and other Silicon Valley and corporate education vendors. The heat in downtown Los Angeles is spreading to Northern California and beyond, posing a huge political problem for not just Deasy but for Cook and other high-tech captains.

But at the bottom of this rush to place technology in every classroom is the nagging feeling that the goal in buying expensive devices is not to improve teachers’ abilities, or to lighten their load. It’s not to create more meaningful learning experiences for students or to lift them out of poverty or neglect. It’s to facilitate more test-making and profit-taking for private industry, and quick, too, before there’s nothing left.