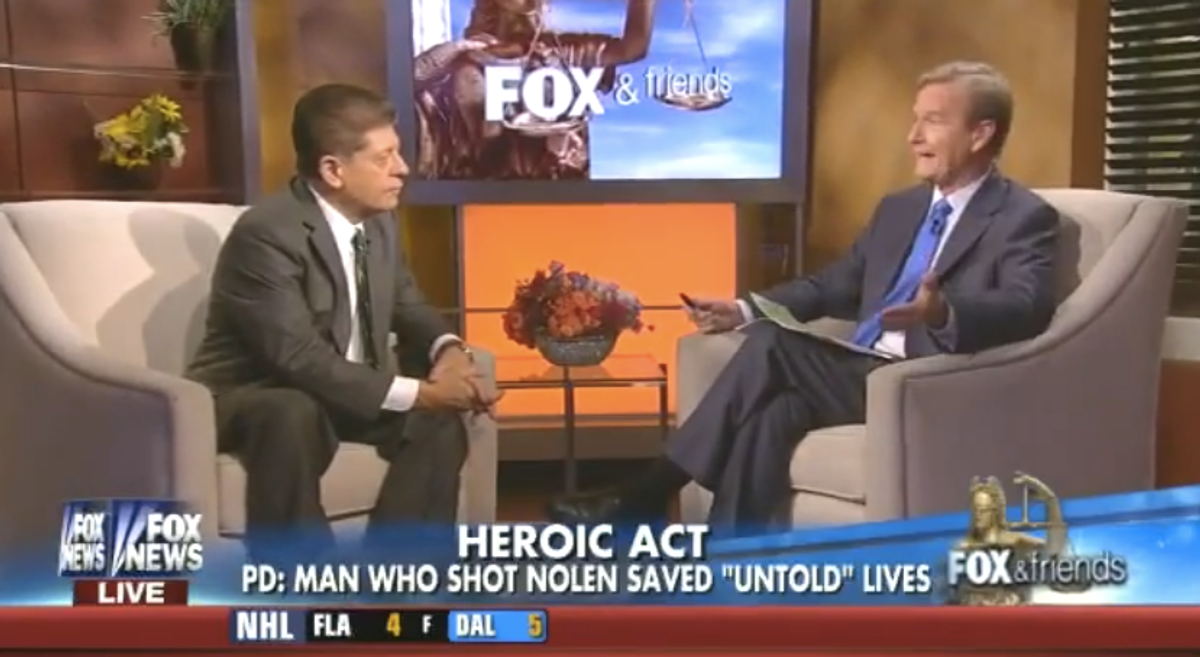 On Tuesday, the pundits on "Fox & Friends" agreed that gun safety laws could increase the chances of people being beheaded in the United States. Responding to the grisly murder of an Oklahoma woman last week, allegedly at the hands of her former coworker Alton Nolen, Fox News analyst Andrew Napolitano suggested that the presence of guns can deter crimes like Nolen's -- which it didn't, and which it can't.

Of course, that's not what happened in Oklahoma on Thursday, when Nolen reportedly drove his car into the front of Vaughn Foods, a food distribution company from which he had been fired earlier in the day, and proceeded to attack two of his former colleagues with a knife. One, Colleen Hufford, was beheaded, while the other, Traci Johnson, survived only after Nolen was shot on the scene by the company's owner, Mark Vaughn. Vaughn is a reserve deputy who is licensed to carry a gun for that role. Napolitano, however, opined that it is not enough for law enforcement officials to carry firearms, but rather that more "good guys" carrying guns is necessary to stop crime.

"Hey, if the pilots on 9/11 had been allowed to carry guns, as some of them now do, that awful tragedy might never have happened," Napolitano said. "The problem is the President of the United States, who's doing everything he can, administratively as the chief executive officer of the federal government, and now attempting to get us to enact a treaty to make it very, very difficult to carry guns. He’s told doctors, ask your patients if they have guns. He’s told the states, ask people when they get registered for guns what their race is. What business is it of the government what race I am?”

Napolitano went on to say that efforts to acquire knowledge about the people who own guns is purely an intimidation tactic. "It's to intimidate people out of getting guns because the president believes that he and the government -- and all logic defies this -- can keep us safer than we can keep ourselves."

"So if Barack Obama could," Doocy asked, "he would ban guns in the hands of everybody except the police?"

"He has made that patently clear," Napolitano responded.

"So the takeaways from what happened in the horrific murder down in Oklahoma at the Vaughn Corporation: Number one, the big question is, was that guy inspired by ISIS or extremism to behead that woman; the other is that perhaps the president of that company stopped other people from being killed because he was armed legally."

"If more people were legally armed, there would be less violence, period," Napolitano concurred. "Whether it's monsters trying to destroy us, or whether it's a crackpot in the workplace or a nutjob on the street."

Watch the exchange, via Raw Story, below: