Stewart, Colbert save the day: Bill O'Reilly and Fox News' ISIS insanity makes them more essential than ever

Stephen Colbert delivers critique CBS was either too afraid, or ill-informed, to use to shut down the Fox blowhard 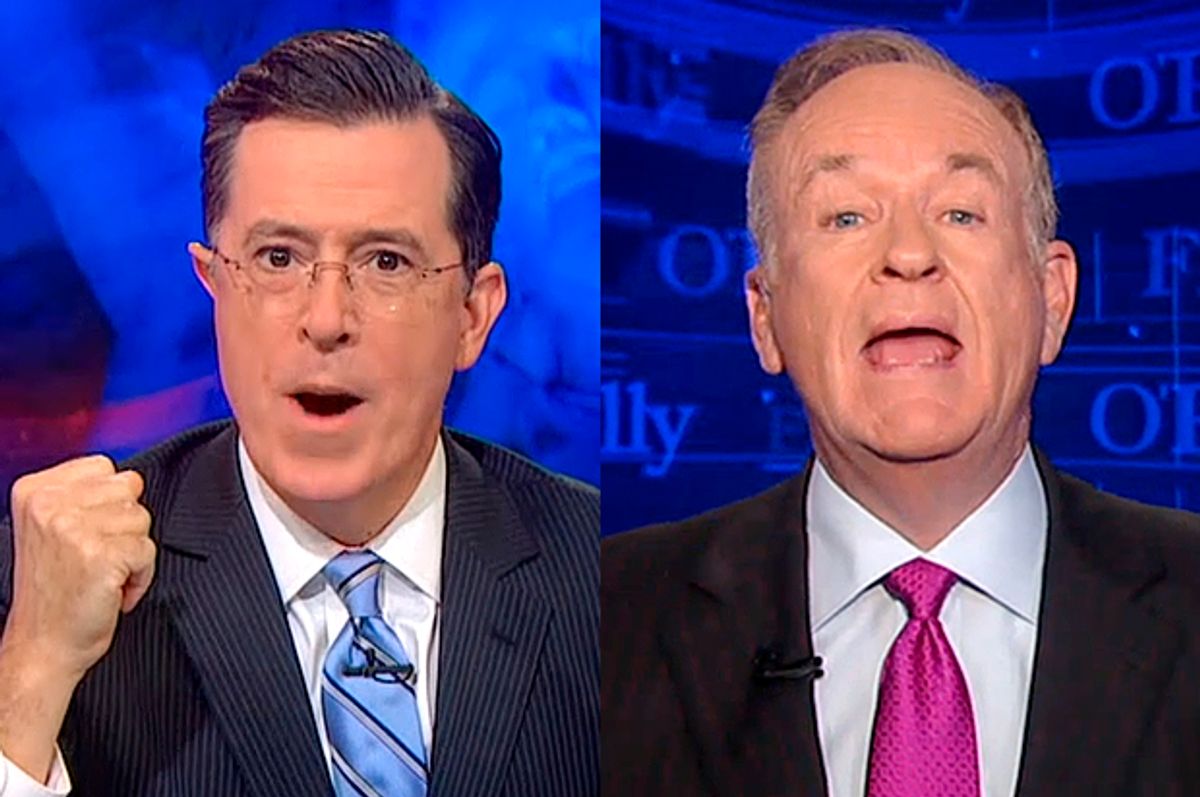 As the nation continues airstrikes on ISIS in Syria and Iraq, the U.S. public is bracing for yet another military conflict in the Middle East.  And in order to make sense of this new crisis viewers are finding that “fake news” often offers better analysis than the so-called “real news.” While Fox News’s Eric Bolling called the first female UAE pilot that bombed the Islamic State “boobs on the ground” and coverage on all major news channels mistakenly described ISIS as an imminent threat to the United States, fake news offered the U.S. public a refreshing dose of reality.

Of course, the idea that the fake news is doing it better than the real news should come as no surprise. In recent years we have learned that viewers more and more often perceive “fake” news as “real” news.  Viewers trust Jon Stewart more than Brian Williams.  And Fox News viewers consistently rank near the bottom of polls on informed viewers, while viewers of shows like "The Colbert Report" know more about contemporary political issues than those consuming mainstream news media.

So why is the “fake” news so good? First of all, in an era when most cable news is overtaken by hype, punditry, and sensationalism, satire news offers viewers a much-needed chance to gain some critical perspective.  When the mainstream media droned on that Obama needed to be more aggressive, Stephen Colbert responded by wishing we could have Frank Underwood as president.  The gimmick immediately revealed the ridiculous nature of most TV news coverage that uses up airtime bashing the president and avoiding the real issues.  Hence satire news often reminds us that the actual topics covered by mainstream news are not helping to inform us.

Secondly, satire news exposes the hypocrisy of political rhetoric on TV news.  For example, on the very same news day that Eric Bolling made the outrageous “boobs on the ground” statement, a major portion or TV news time was spent deconstructing Obama’s “latte” salute with Bolling himself calling the salute with coffee in hand disrespectful to the troops.  Stewart pointed out the hypocrisy of Bolling’s attacks on Obama by reminding viewers that Bolling had shown no respect for the female UAE pilot.  His point is that, if we should respect troops, then we should respect ALL troops.  Stewart called out Bolling saying, “You don't really care.  You don't really care about this.  You have no principle about this.” Today’s viewers know that satire news often has more integrity than “real” TV news.

So as we attempt to stay informed about the current military crisis our best bet is to stay tuned to satire news.  Here are just two highlights of recent fake news coverage of the ISIS conflict that outdoes the mainstream TV news:

Stephen Colbert reminds us that Bill O’Reilly is a pundit, not a military strategist

While the U.S. began airstrikes against ISIS, Fox News host Bill O'Reilly proposed his own solution to fight terrorists: a volunteer mercenary army with troops from all over the world, trained under U.S. authority, and funded by a coalition. O’Reilly presented this plan on his own show on September 22, but he also had the chance to pitch it the next day on CBS "This Morning."

"We would select them, special forces would train them -- 25,000-man force to be deployed to fight on the ground against worldwide terrorism. Not just ISIS," O'Reilly said Tuesday. "What's killing the west now in this fight on terror, and Putin as well, is the politics of it. Can't get anything done quickly, can't mobilize fast. So, it's going to happen. This anti-terror army is going to happen," O'Reilly said confidently.

Even though commentators on O’Reilly’s own channel called his suggestion preposterous and “a terrible idea,” there was no such critique on CBS.  And O’Reilly has gone on to re-present the notion on his own show, convinced that it is the only way forward.

But thankfully Stephen Colbert stepped in to remind news viewers that O’Reilly has zero credibility as a military strategist.  He began by sarcastically agreeing with O’Reilly’s plan to put boots on the ground since he isn’t buying the “flimsy excuse that no one thinks it is a good idea.”  He then ironically went after the idea that a paid military force would be better suited to the fight than our own armed forces: "You know these mercenaries will be good guys, because only the best people kill whoever you want for cash," Colbert said. "Unlike those suckers who do it for the love of their country."

He finished the piece by pointing out the hypocrisy of the war-mongering rhetoric that imagines conflicts where we just win with no losses of any kind: “So listen up Bill, because as long as we are pretending there is a way to fight a war that doesn’t include sacrifice and that the American people and politicians don’t have to feel any responsibility for, we’ve got to think bigger.  Like maybe my invisible bomb that only blows up bad guys.” Colbert’s point: there is no simple solution.  And we are wasting our time watching coverage that suggests otherwise. He shows us that the TV news media repeatedly presents information on ISIS to the public that makes no sense.

Jon Stewart pays attention to the language of war

Jon Stewart has offered viewers a full range of critique of the ISIS coverage. On September 23 he focused on a couple of key issues.  First, he mocked the media’s excitement and “anticipation” of the war by calling the airstrikes on ISIS “the IPhone 6 of wars”: “It’s expensive, a little bigger, a little more unwieldy than you thought it was going to be; it’s going to be at least a two-year commitment, kind of feels like you just f--king got in the last one.”  The bit makes it clear that we should really wonder why the media is so psyched up for the conflict.  It may boost ratings, but it can’t be good for the United States.

Next, he highlighted the constant media obsession with which terrorist group is the “worst.” By using a mash-up of a number of news media segments, Stewart was able to put language about ISIS as the most dangerous terrorist group up against identical language about Khorasan. We hear that Khorasan is far more dangerous than ISIS, to which Stewart replied, “what?” “Didn’t we just hear that ISIS was the worst of the worst?” His point: why does so much TV news coverage focus on hyping up the danger of these terrorist groups?  All of the fear mongering only serves to worry a public that needs TV news to offer it actual information rather than melodrama and panic.

And lest we think that satire news is always partisan, Stewart used the same segment to go after the language used by the White House. Showing recent clips with White House Press Secretary Josh Earnest where the word “war” was avoided, Stewart asked, “why can’t we admit we are at war?”  He then attacked the administration’s rhetoric, quoting Earnest saying:  “We’re talking about a counter-terrorism strategy that we will apply to the situation that we have successfully applied in other places.” To which Stewart sarcastically responds, “Successfully? Whatever floats your boat.”  Stewart reminded the public that, perhaps more troubling than the administration’s reluctance to use the word “war,” is its use of the notion of “success.”  Can we actually claim “success” in any of our recent uses of military force in counter-terrorist actions?

The fact is that this sort of questioning of the way the public is receiving their news is only happening on the fake TV news coverage.   It is only there that we get valuable critique of the rhetoric of both politicians and cable news media.

What is the secret ingredient in the fake news coverage?  It is not just its integrity, its exposure of hypocrisy, and its questioning of the status quo; it is also its use of irony.  The irony, sarcasm, and parody of fake news work to help us to take the critical distance necessary to form our own opinions.  The fake news doesn’t tell us what to think; it asks us to think for ourselves.  As we face yet another crisis that will likely cost our nation valuable resources and precious lives with no clear strategy for success nor end in sight, our nation’s future depends on citizens who know better than to believe the hype.