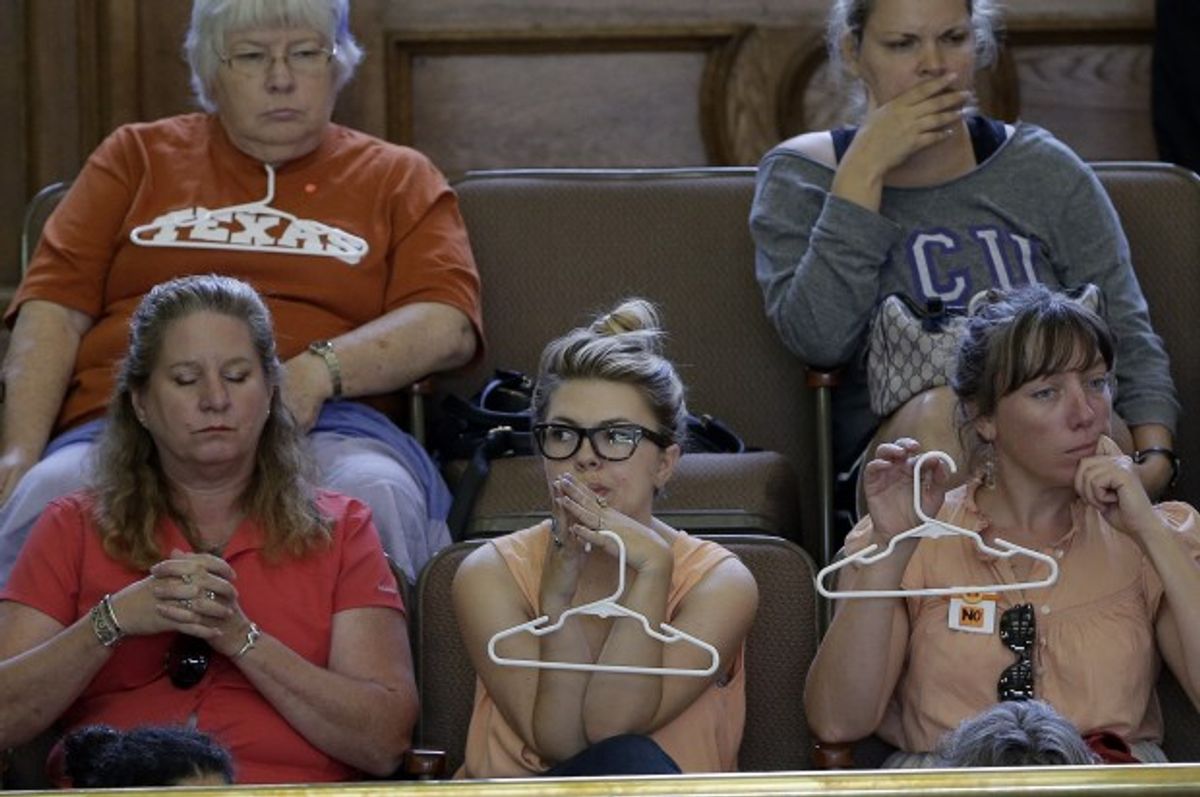 On Thursday, the Fifth Circuit Court of Appeals ruled that Texas may begin enforcing HB 2, an omnibus antiabortion law that requires abortion clinics to meet the standards of ambulatory surgical centers, and requires abortion providers to gain admitting privileges at hospitals within 30 miles. The three-judge panel blocked an injunction granted by a federal district judge in September on the grounds that the law does not present an “undue burden” to women, allowing HB 2 to take effect immediately. On Friday, no more than eight abortion clinics in the state of Texas — a state of 20 million people and more than a quarter million square miles — will remain open.

Eighty percent of Texas abortion clinics have been forced to close. Eighty percent. Opponents of the law have repeated this number over and over again since before the Fifth Circuit ruling was handed down, but the repetition hasn’t gotten through so far. According to the appeals panel, neither removing the vast majority of women’s safe reproductive care options, nor forcing approximately 1 million Texans to drive more than 100 miles to reach a clinic poses an undue burden to women seeking abortions. That raises an important question that the Supreme Court, most likely, will have to answer: What, besides a straightforward ban on abortion access, constitutes an undue burden to women? Over how many hurdles will Texans or women in other states have to leap to access care? How many women, and how high will they have to jump?

“Women’s ability to exercise constitutional rights now depends on zip code,” Stephanie Toti, senior counsel for the Center for Reproductive Rights, said in a press conference on Thursday. “It’s undisputed that nearly a million Texas women are going to face a 300-mile round trip to access abortion services. Women are going to face distances of over 1,000 miles. There has been an 80 percent reduction in the number of clinics. If that’s not a substantial obstacle, I don’t know what a substantial obstacle would be.”

The Center for Reproductive Rights plans to appeal the Fifth Circuit ruling. The center’s president, Nancy Northup, believes the case is “crying out for review” by the U.S. Supreme Court. “I wouldn’t speculate about what the court will do,” Northup said. “What I can say is that it is going to be a showdown that we have not seen in two decades, on whether the promise of Roe v. Wade will have meaning for women in the U.S. If the Supreme Court were to uphold the law in Texas, which is not based on health and safety… they will have hollowed out those protections.”

Northup’s point that it’s not worth speculating couldn’t be more valid at such a dire time. Too much speculation — about the fictitious benefits to women’s health ambulatory surgical center standards will have, about the need for hospital admitting privileges — had already occurred. Medical experts have already made clear that the stipulations of HB 2, drawn up and enacted by lawmakers for the express purpose of shutting down abortion clinics, do nothing to promote patient health. For women seeking abortions, these restrictions only serve to put their health at risk. But lawmakers believe otherwise, based on anything but medical or scientific fact. They have speculated wrongly about the possible outcomes HB 2 will have for women’s health, in a way that is not only delusional, but shows a patent disregard for the lives of Texans.

So now it’s time to get past the hypothesizing about what will happen when Texas women are effectively deprived of their access to basic healthcare, which is what we have been saying will happen. It’s true — that is what will happen, is happening, now that HB 2 has taken effect. Here’s the corollary we often leave out: Women will die.

When they don’t die, they have babies who might very well die instead, before their first birthdays. Just last week, the Centers for Disease Control and Prevention release a new report displaying the United States’ shamefully high infant mortality rate — 6.1 babies for every 1,000 — compared with other industrialized nations. And if those babies don’t die, they are likely to be raised in poverty, without access to any other government services that would improve their quality of life. Because Texas, like other states with similar abortion restrictions, was found to have some of the worst health outcomes for women and children in the nation in yet another recent study, out this week. Researchers analyzed five different health indicators and found that laws like HB 2 inform the lowest overall well-being. Texas, along with Oklahoma, had the lowest children’s health scores. It met none of the benchmarks for children’s health.

This is the effect HB 2 will have in Texas. This is what GOP concern for women’s health looks like.

There are lawmakers who have been willing to come clean about the goals of restrictive antiabortion legislation like HB 2. They are trying to stop women from having abortions at all costs. In Texas, they are succeeding. Since the first wave of admitting privileges laws went into effect, the state’s abortion rate has dropped to three times below the national average, with rates even lower in particularly hard-hit regions such as the Rio Grande Valley and West Texas. According to Amy Hagstrom-Miller, CEO of the Texas-based Whole Women’s Health network, the group’s clinic in McAllen, which was forced to close with the new restrictions, provided 20-50 abortions per week on average for 11 years. So far, Whole Women’s Health has only been able to assist 20 to 25 women seeking abortions at clinics further north.

“Do the math,” Hagstrom-Miller said. “It’s a barely significant percentage that we’ve been able to help travel north. There is the idea that abortion care exists. But it’s not a reality for the thousands of women who have been left behind in these communities.”