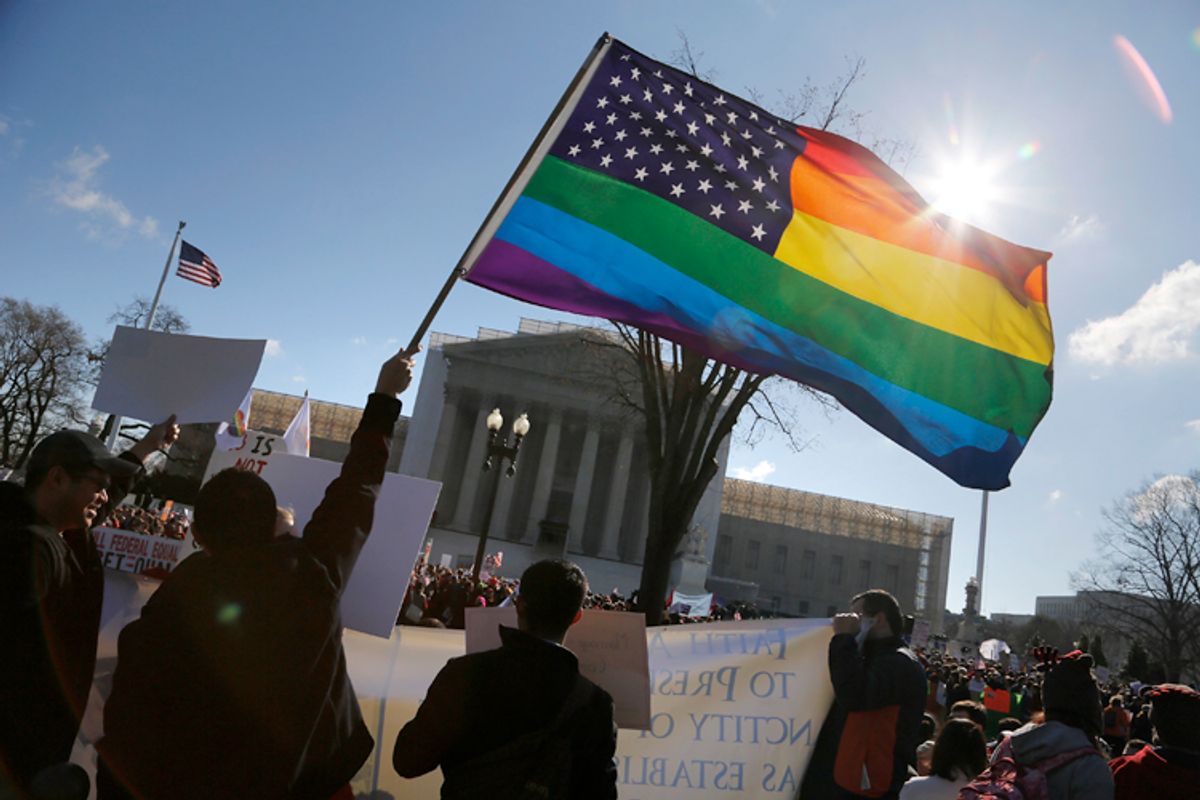 Name any civil rights cause of the last 60 years, and chances are that National Review, the conservative magazine founded by William F. Buckley in 1955, opposed it.

Desegregation and voting rights? National Review railed against them.  The women’s rights movement? The magazine remains an inveterate opponent. The Americans with Disabilities Act? A burden on businesses. LGBT equality? Take a guess.

Unsurprisingly, the magazine’s editors aren’t fans of the Supreme Court’s decision Monday to let stand a series of lower court rulings in favor of marriage equality, effectively paving the way for same-sex marriages to begin in up to 11 new states. In an editorial published Tuesday, the editors recited the standard conservative talking points – that gay people should have to wait to enjoy full equality until a majority of voters in their states think they deserve it, that civil marriage somehow poses a threat to religious liberty, and that the 14th Amendment’s equal protection clause shouldn’t apply to gay people because the country didn’t have them in mind when it ratified the amendment.

No anti-marriage equality argument is complete without hysterical warnings of slippery slopes, of course, and National Review made sure to deliver on that score, too, predicting that legalized “[p]olygamy and ‘polyamory’” and “sibling incest” may not be far off:

To disconnect marriage from sexual complementarity is to redefine it so completely that other principles are lost. The divorce revolution has damaged both permanence and fidelity as basic features of marriage — but with marriage redefined so that child-rearing is no longer central to its reason for being, they no longer make any sense at all. Neither does limiting marriage to couples, or even forbidding marriage between the closest blood relations. Polygamy and “polyamory” are therefore the next obvious developments. And the German ethics-advisory council that recently recommended legalization of sibling incest was only following the remorseless logic of the redefinition of marriage.

The editorial concluded with the brazen assertion that “defining marriage as the union of a man and a woman restricted nobody’s freedom,” with the editors apparently unimpressed by the social, financial, and legal benefits that come from marriage.

“Same-sex couples were free to live as they chose,” the editors wrote, “they lacked only official recognition of their unions.”  Rich words coming from a publication that has backed anti-sodomy laws and defended legislation that would allow businesses and individuals to refuse services to gay people on religious grounds.