Sure, it's good that cop brutality is being recorded and seen. But there's an underside that needs to be discussed 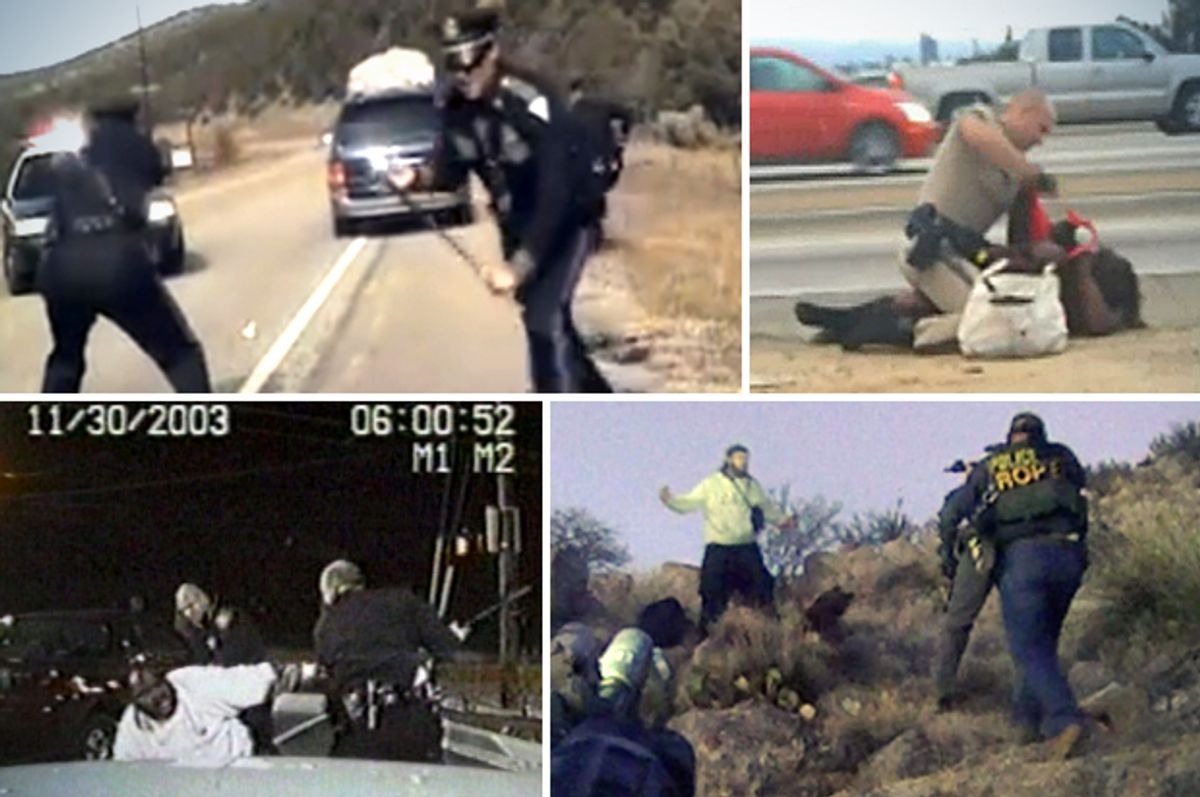 The grainy cell-phone video shows a stocky white police officer with close-cropped hair backing a black man in a camouflage-print sweatshirt against a chain-link face. The man in the sweatshirt is saying “You see this? You see this?” The officer takes something that could be a wad of cash out of the man's pocket and lets him go, waving the wad in his face. Behind the camera, someone repeats “He just stole his money. He just stole his money. That's robbery.” The man stumbles out of the camera view.

Another person approaches the police officer, demanding his badge number and asking him to say his name. The officer walks toward her, refusing to give his name and backing her up. The video ends with him pulling out pepper spray and aiming it at her, spraying.

According to the New York Times, the man in the camouflage sweatshirt is Lamard Joye of Brooklyn, out celebrating his 35th birthday with family and friends. The woman is his sister, Lateefah Joye. The money has not been returned to Joye, who was not arrested that night, and Joye's lawyer, Robert Marinelli, told the Times he has not received an explanation of what happened to the money. He has submitted pay records from Joye's construction job and bank records to demonstrate that Joye came by the money legally and took the money out to celebrate his birthday.

The video is just the latest shocking tape of police officers behaving brutally toward black men and women to make the rounds in recent months. Though more and more people have seen the videos, though, it's not clear that police departments or elected officials see them as evidence of a systemic problem.

Another horrifying video making the rounds this week shows an officer handcuffing a limp teenager who is lying partially under a car while a bystander screams “You knocked him out!” Marcel Hamer's family is suing the NYPD, saying that the officer struck their 17-year-old son hard enough to cause headaches, dizziness and memory loss that continue. In August, video caught police dragging Denise Stewart half-naked from her apartment and collapsing while bystanders shouted about her asthma. In St. Louis, less than two weeks after an officer shot Michael Brown, bystander video showed police shooting Kajieme Powell in the street. And there are many more.

It is clear, as Gene Demby pointed out at NPR, that these videos are capturing media attention in a new way, that social media has contributed to their spread and use as rallying points for action. The videos support the stories of eyewitnesses who might otherwise be dismissed. At a rally on Staten Island in protest of the choking death of Eric Garner at the hands of the NYPD, Garner's cousin spoke onstage about the neighbor, Ramsey Orta, who videotaped the assault on Garner. “He's part of my family now,” he said of the man.

It is also clear that police officers don't like being filmed. Shortly after the video of Garner began to make the rounds, Orta was arrested on weapons charges. He told reporters “When they searched me, they didn't find nothing on me. And the same cop that searched me, he told me clearly himself, that karma's a b***h, what goes around comes around."

As Candice Bernd wrote at Truthout, organized groups like CopWatch, who film police actions in their communities, have faced retaliation from the police. In Austin, Texas, after activists launched the Peaceful Streets Project to monitor police activity, a Freedom of Information Act request found that police associate PSP with “domestic terrorism.” In New York, new police commissioner Bill Bratton, brought in under promises of reform by new mayor Bill de Blasio, had to issue a memo to remind police that it was legal for people to film them.

In New York City, Cecily McMillan, the Occupy Wall Street activist sent to Rikers this summer for assaulting a police officer (she argued that he had grabbed her breast from behind and she elbowed back blindly, not knowing who had their hands on her) is on trial again. (Update: she was found not guilty on Friday.) This time she faces a misdemeanor charge of obstructing government administration for filming the arrest of two people who walked through an open emergency exit door on the subway rather than paying to go through turnstiles. (Transit fare evasion is one of the most common charges leading to incarceration in New York City.) On Wednesday, as the trial went on, supporters of McMillan held a press conference outside of the courthouse on the subject of filming the police, calling attention to the use of charges like those against McMillan to intimidate bystanders out of attempting to take video of arrests or police stops.

Video played a key role in McMillan's first trial, where a few seconds of blurry footage were replayed again and again, with witness after witness explaining to the jury what they thought was happening in the tape. Conviction lies, all too often, in the eyes of the beholder.

As Regina Mahone wrote at RH Reality Check, what one sees on videos of conflict with the police is influenced by one's existing beliefs and biases. For those who believe black bodies are often a threat and that police are generally a force for good, it may be easy to look at a video like the one of Lamard and Lateefah Joye and presume they deserve what happened to them, just as the police officer looked at cash in Joye's pocket and presumed that a black man with a wad of bills must have been up to no good.

The existence of these videos also shows the limits of the popular reform goal of body cameras on police officers, which has been promoted as a solution in Ferguson, Missouri and in New York City. Even with bystanders obviously filming police on cell-phone cameras, officers seem perfectly comfortable pocketing a man's cash, punching a teenager, or putting a man in a chokehold. Video of Officer Sean Williams shooting John Crawford III in an Ohio Walmart was not enough to even get an indictment.

Video evidence alone is not enough to make change happen. It is a start, as it brings the reality of the day-to-day impunity with which the police often act home to people who are rarely victims of such actions. But more is required of us than expressions of shock.

Without action, the videos can too often function purely as spectacle, piquing our shock and anger and for a moment before we pass on to the next story, the next YouTube clip, return to our daily lives. For many of us, the reality shown on those video clips will never happen to ourselves or to those we love, and so it is easy to express outrage and assume that the existence of the video means justice will come. Some of us have the luxury of forgetting that black lives have been devalued in this country for centuries.

Tope Fadiran Charlton, writer and researcher on issues of race, gender, and sexuality in American culture, suggests that we need to think more about the ethical and political implications of consuming media that documents violence, particularly violence against black people. She tells Salon, “It's rare that serious or sustained objections are raised about the use of these images—usually without the consent of the victims or their loved ones—or even for any rationale to be provided for their use. The logic of white supremacy makes Black suffering something that is obviously to be consumed, without consideration for the privacy or feelings of those affected.”

She further points out that even when we intend to share the videos to bear witness and to call for justice, we unwittingly collaborate in dehumanizing the victims of violence:

“Many of the same voices condemning sharing videos of white journalists being beheaded as callous and disrespectful retweeted and reblogged images of Michael Brown and Adrian Peterson's son. It becomes clear that only certain certain communities are afforded dignity and privacy for their dead or injured. The rationale of images as change-making "proof" of Black suffering ignores the long history of the circulation of such images in American culture, long before Eric Garner, Rodney King or Emmett Till. The notion that widespread consumption of Black suffering, as a meme, will spur greater empathy and justice for Black communities, holds little water in a nation where postcards depicting lynched Black bodies were once treasured commodities, bought, sold, and circulated all over the country.”

A commitment to justice comes not from retweeting a video or a photo, but from taking action to make change. These video clips have to be seen not as individual spectacles to be exclaimed over and forgotten, but as evidence of a systemic problem with policing that spans the country. The activists in Ohio who marched for John Crawford understood this, making the release of the tape of Crawford's death only the first of their many demands.

Justice, as Malaya Davis of the Ohio Student Association says, will come when “we fundamentally shift the power dynamics and relationship between law enforcement and the community.”