It's politically risky -- but the best way for the committee to right its past wrong. There's one problem, though 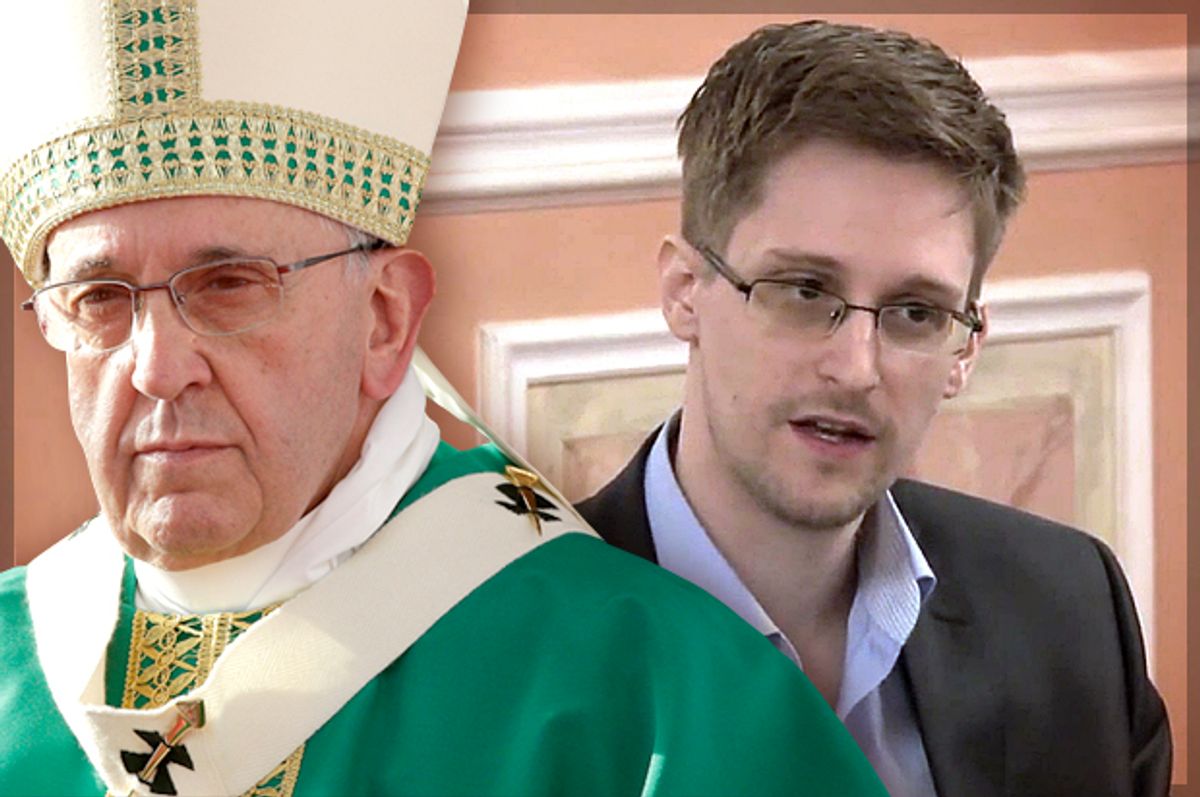 It's Nobel Prize season, which has commentators speculating about whether NSA whistleblower Edward Snowden might win the prize on Friday.

Most of that has involved handicapping the prize rather than assessing why Snowden's leaks have been so important. In the U.S., after all, Snowden has mostly been credited with exposing the phone dragnet and unwarranted back door searches into US person data collected under PRISM. That is, his leaks have largely been discussed in terms of their most obvious impact on Americans. Why would the Nobel Prize committee reward him for that?

Snowden's disclosures on the way the NSA has compromised U.S. software providers and encryption are both special cases, with important implications for both Americans and foreigners. To Americans, the possibility the NSA steals data from Google overseas -- all but confirmed by Eric Schmidt on Wednesday -- makes it likely they don't benefit from protections designed to limit government spying domestically. It also permitted NSA to spy on everyone outside of the legal regime NSA's defenders boast of. And by undermining the security of software for everyone, NSA makes it far more likely that repressive governments will be able to spy on activists -- not to mention criminals steal. Even assuming the NSA had good judgment about whom to spy on (by no means a fair assumption, given its collection of data to smear of non-violent ideological opponents to the U.S.), the NSA's spying still makes it easier for nefarious entities to spy.

Finally, there's the issue of America's abuse of its dominant position on the telecom infrastructure and governance. Because it and its partner, the UK, sit astride many of the most important telecom switches, the US and its allies can spy in bulk with much greater ease than other countries can conduct targeted spying. This subjects huge numbers of innocent civilians around the world to US scrutiny. And it makes the US a de facto information empire, all in secret. As one measure of how little oversight NSA's bulk spying on foreigners receives, the NSA's Privacy Officer released a privacy report the other day that simply exempted that from her coverage. Snowden made the sheer scale of this spying visible, providing an opportunity to do something about it. Yet that affects innocent people around the world.

Internet companies and other countries have only made initial strides to address this imbalance. Many have used it to opportunistically call for their own advantages or relaxed spying controls.

Still, Snowden's revelations have provided not just American citizens, but world citizens, with an opportunity to reclaim the privacy of their own communications and activities online.

And awarding Obama nemesis Snowden the Nobel Prize might absolve the committee of any regret for providing first term President Obama with an opportunity to claim the country that, under his leadership, would  go on to vastly expand the use of drone warfare and engage in several wars of dubious legality, abided by international standards. "I believe the United States of America must remain a standard bearer in the conduct of war," the President promised in his Nobel acceptance speech. "That is what makes us different from those whom we fight."

Those promises seem so quaint now, as the U.S. escalates another war.

That said, a Snowden pick is likely too politically risky. No European country but Russia has offered Snowden asylum, so it's unlikely the Norwegians will do something just as likely to piss off the U.S. Numerous European countries, after all, play willing partners in America's global dragnet. Europe -- including Norway -- are the spies Snowden warned us against.

Which is one reason the cautions raised by the premature crowning of Obama as a man of peace may raise object lessons about Snowden, too. Snowden has completed a courageous act, leaking a mother lode of documents revealing just how exposed we are to the NSA's glare. He has continued to speak out, to the extent he is able from Russia.

But the response remains very much in flux. Across the world, it's quite possible Snowden's leaks provide more repressive government the excuse to crack down. Certainly America's Five Eyes spying partners (in addition to the UK, New Zealand, Australia, and Canada) are doing so: all but Canada have passed or are passing expansive laws legalizing still more surveillance. Citizens -- in Five Eyes countries and outside -- have not yet seized the opportunity created by Snowden to roll back the dragnet. Even in the U.S., the only reform on offer, Patrick Leahy's USA Freedom Act, worsens some aspects of spying while achieving the important goal of removing all Americans' phone records from the government.

Snowden did a courageous thing by leaking the NSA's secrets, and continues to engage, as possible, in constructive fashion. If the world responded well to those disclosures, it might lead to a more just world, one much safer for dissent and human relationships. But we -- the rest of the world -- have not yet delivered on that promise yet, and may not. So a prize for Snowden -- no matter how important his actions -- may yet reward the mere hope of change, not real progress towards it.