As Amazon wars heat up, the New York Times strikes an odd tone in two pieces filled with faux-"balance" 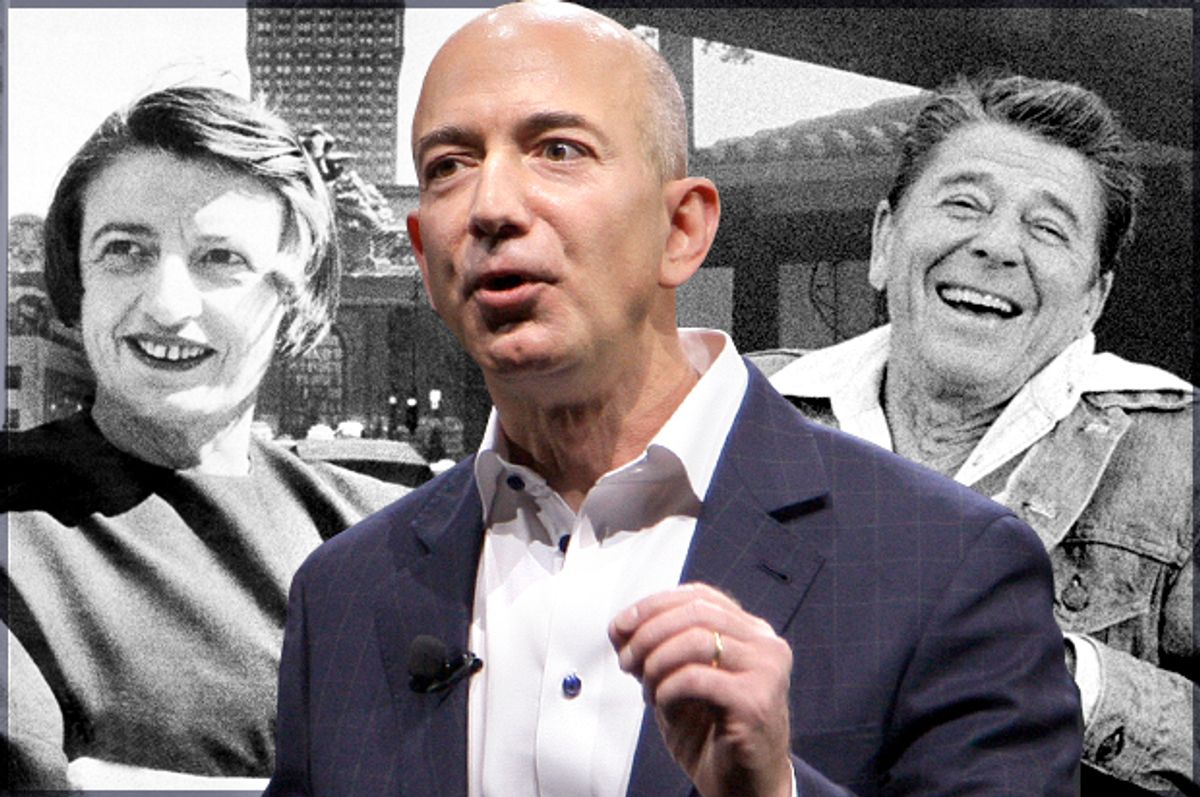 In the careful-what-you-wish-for department: A bit more than a week ago, the New York Times’ public editor, Margaret Sullivan, urged her paper to bring some balance to its coverage of Amazon and bookselling. This is not, she wrote, the story of “good and evil” or “a literature-killing bully.” Her closing paragraph asked for a new kind of piece: “I would like to see more unemotional exploration of the economic issues; more critical questioning of the statements of big-name publishing players; and greater representation of those who think Amazon may be a boon to a book-loving culture, not its killer.”

She’s right, largely: The newspaper of record needs to work very hard to look at various sides of any issue it covers, even if the anti-Amazon side has made more noise lately. But so far the stories sympathetic to Amazon have been unconvincing at best. In fact, they’re starting to resemble the ass-covering pieces newspapers sometimes do to placate people in the fringes of an issue, like when nervous editors send out calls to find a scientist who doesn’t believe in global warming.

The first of the pieces, a Bits story by David Streitfield, turned on a quote from self-published science-fiction writer Hugh Howey, who really should demand to be put on the Amazon payroll: He is quoted in virtually all the stories that seek to give “the other side” of the Amazon debate. (In a time when author advances have gone down by something like 50 percent because of Amazon’s creative destruction, and where most self-pubbed writers make almost nothing, his experiences are about as representative of the life of a contemporary author as Horatio Alger’s characters are of life in the Gilded Age.)

The second piece came from Joe Nocera, one of the Times’ best and most hard-headed columnists. He writes well on matters of economic justice and on the toll of America’s gun free-for-all. Even smart, sober writers have bad days once in a while, and his column came off as a head-scratcher that took the rhetorical easy way out.

Nocera opened with a perfectly reasonable and pertinent question: “Is Amazon a monopoly?” He was responding not just to authors like Ursula Le Guin, who have been critical of the online giant, but to Franklin Foer’s recent New Republic cover story, “Amazon Must Be Stopped,” which called for a Department of Justice investigation into monopoly practice.

A veteran business writer, Nocera quickly establishes that the online giant, which controls more than half of e-book commerce and almost half of the book market itself, is not yet technically a monopoly: It is not the only player in its game. After conceding some bad things about Amazon, he concludes: “But, am I going to stop using Amazon? No way. I’m betting you won’t either.” Which is both the way Foer began his piece – acknowledging the consumer convenience of the site – and a glib statement that skips over an important reality: In many cities and neighborhoods, Amazon has destroyed the bookstores (and other locally owned shops), so it’s often the only option. Think of what the rapid spread of cellphones have done to payphone booths: There now is no alternative. In other words, exactly what anti-trust legislation was established for.

There are at least two points where Nocera sprints past important issues without really engaging them. “Even in the one business Amazon does dominate — books — it earned its market share fair and square,” he writes. Well, part of the way it earned that market share was treating its warehouse workers like servants (which Nocera acknowledges further down). Another way it’s crushed the competition has been to lobby against paying taxes: The bookstore that used to be down the street from your house had to pay taxes on its sales, while for years Amazon didn’t. Any wonder which side won, and which lost? If this is “fair and square” we come dangerously close to saying that might-makes-right of Donald Trump or Vladimir Putin. No wonder Ayn Rand types love Amazon.

The issue of whether Amazon or these other tech companies are monopolistic is also far more complex than Nocera lets on in his admittedly limited space. Here’s how Foer breaks it down:

“The Internet-age monopolies are a different species; they flummox our conventional ways of thinking about corporate concentration and have proved especially elusive to those who ponder questions of antitrust, the discipline of law that aims to curb threats to the competitive marketplace. Part of the issue is the laws themselves, which were conceived to manage an industrial economy—and have, over time, evolved to focus on a specific set of narrow questions that have little to do with the core problem at hand.

“Whether Amazon, which does $75 billion in annual revenue, has technically violated antitrust laws is an important matter, of course. But descending into the weeds of predatory pricing statutes also obscures the very real threat. In its pursuit of bigness, Amazon has left a trail of destruction—competitors undercut, suppliers squeezed—some of it necessary, and some of it highly worrisome. And in its confrontation with the publisher Hachette, it has entered a phase of heightened aggression unseen even when it tried to crush Zappos by offering a $5 rebate on all its shoes or when it gave employees phony business cards to avoid paying sales taxes in various states.

“In effect, we’ve been thrust back 100 years to a time when the law was not up to the task of protecting the threats to democracy posed by monopoly; a time when the new nature of the corporation demanded a significant revision of government.”

Back to the 21st century, which is starting to look a lot like the past. Amazon has begun to vertically integrate: It not only warehouses and delivers books – perhaps soon by drone -- but operates a publishing arm and is on the verge of opening several bookstores in the same cities in which it has helped to extinguish some once storied, now demolished shops. This is starting to sound a bit like the way movie studios made the movies and screened them in their own cinemas – until they were broken up (in a time of more aggressive anti-trust regulation) by a federal government less cowed by big business.

Is Amazon all bad? Of course not. There’s no question it makes some things easier for consumers, who can get novels and condoms and 10W-30 motor oil all delivered within a day or two with just a few keystrokes. For some genre authors who are making money from self-publishing, it’s helpful. Whatever Jeff Bezos’s longterm goals with the Washington Post – is he mostly after the editorial page so he can bolster his company’s already formidable lobbying apparatus? – he’s so far been good for the paper.

U.S. antitrust law since Reagan – thanks in part to a path smoothed by Ralph Nader -- has focused on consumers and not the larger environment of competition, but this is not the only way to think about antitrust. If the Department of Justice took the big picture, as it once did, it would realize how short-sighted its being. Is it good for consumers when bookstores and record stores close, when publishers go out of business, when authors (or musicians) leave the field to get their real estate license because they can no longer make a living in this “democratized” environment? As Foer writes, “Either way, the culture will suffer the inevitable consequences of monopoly—less variety of products and lower quality of the remaining ones.”

The competitive nature of both business and art forms – with players jockeying against each other for sales and awards and media attention – often blinds us to the fact that any cultural field operates like an ecosystem. And Amazon is like a factory that gets rich by dumping chemicals into the river. Whatever you call it, it smells.