Why are banks opening branches... in high schools?

Banks are literally setting up shop in public high schools in poorer communities. Here's what they're really after 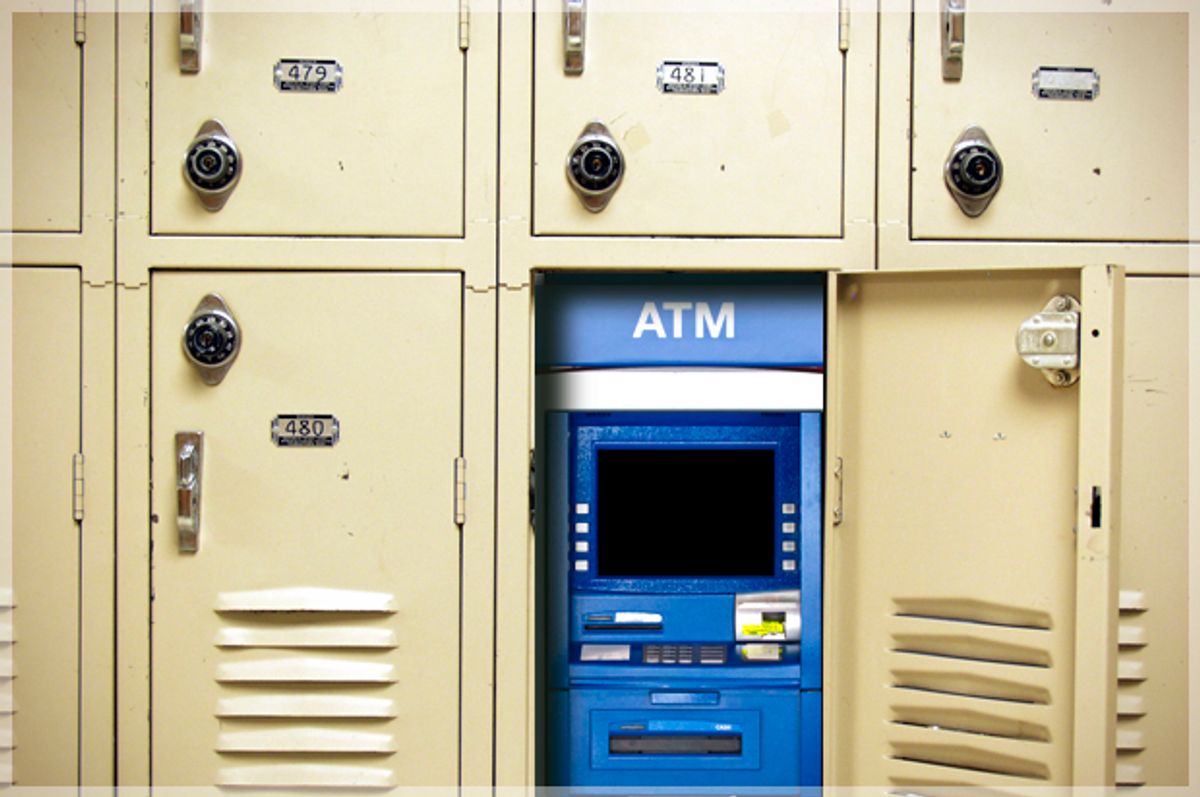 My credit score is not good. It’s so bad, in fact, that it’s kept me in relationships well past their expiration dates because, in this land of opportunity, you can’t even rent a roof under which to sleep without first passing a corporate check into your background--and love, frankly, is easier to find than someone with good credit. So it’s somewhat surprising that, since I started keeping track around six months ago, the good folks at Capital One have sent me no less than 23 credit card offers, or about one every eight days.

I already have a credit card—the prepaid kind that draws from an account into which you have already deposited your hard-earned cash, which is to say it’s not a credit card at all, even if it does say “VISA.” It is, however, what was available to a person like me who graduated college just before a global depression and couldn’t afford to immediately begin paying back all those student loans with the money I didn’t make from an unpaid internship.

But Capital One is undeterred. It’s determined, actually, to encourage a poor life decision by getting me to sign up for a double-digit interest credit card that my history to date does not justify my receiving. It’s this very behavior—risky, high-interest lending to people with dubious credit histories—that got Capital One in trouble back in 2008, when the U.S. government gave it $3.6 billion so it could avoid bankruptcy. If there’s anyone worse at managing their money than me, it’s the suits at the top of this bank.

Why, then, are schools inviting Capital One to teach our precious youth about fiscal responsibility? Since 2007, the bank has opened four branches inside public high schools, all of which are located in underprivileged communities: one in Newark, New Jersey; one in Harlem, New York, one in the Bronx; and another in Prince George’s County, Maryland. Each branch offers a "limited menu of products designed primarily for student savers" (credit cards are not available to those under 18), which are available not just to students, but teachers and administrators as well. Each location is staffed by ten to 12 high school seniors, who work three-and-a-half hour shifts, three days a week, after spending two weeks over the summer “in formal teller training at a Capital One Bank training center.” The stated purpose of it all: To offer its student staff “experience with real-world money management” and improve “their readiness for college and future careers.”

Politicians, in addition to local school boards, are supportive, accepting the on-campus branches as the bank's way of giving back. “We are leaving the days when banks were abandoning our inner cities and abandoning our communities and Capital One is leading the way,” said Cory Booker, U.S. Senator and former mayor of Newark, a quote that's included in the bank’s promotional literature. And the federal government is actually encouraging it: The Community Reinvestment Act of 1977 requires banks to “serve the convenience and needs of the communities in which they are chartered to do business.” That language passed at a time when banks were often refusing lines of credit to low-income Americans—and the Treasury Department now considers the opening of “school-based bank branches” to help meet a bank’s obligations under that law.

There’s another benefit, of course, which the Treasury Department itself points out: Promoting “financial literacy,” including through school-based branches, enables banks to “extend the reach of their products and services to low- and moderate-income persons and to unbanked and underbanked markets, and thereby, grow their customer base.”

And so banks keep opening them. In May 2014, Union Bank and the Los Angeles Unified School District announced the opening of two student-run branches in local high schools. The bank’s executive vice president, Leticia Aguilar, called it a “dream come true,” with a press release announcing that the branches would offer “traditional banking products and services” to students, teachers, and administrators. Students receive a $500 stipend for staffing the branch and $1,000 for college.

I live in Los Angeles and thought: I’m writing a story about student-run banks, wouldn’t it be nice to see one?

“We’d be happy to set up a visit,” said Tanya Peebles-Hill, vice president of corporate communications at Union Bank, when I reached out to her in an email. Someone else wasn’t happy, though: the people who pay her. Two days later, Peebles-Hill sent me a one-line note: “I did not get approval to proceed.”

Fine, so the bank didn’t want a journalist seeing the branch they opened in a publicly funded school. Still, would someone at least talk to me about it?

“I'm getting some resistance,” she told me over the phone. “You know, obviously, I think, because of the tone of the old Vice articles and just some of your articles in general.” But she did come through, ultimately forwarding some of my questions to Jan Woolsey, Union Bank’s managing director of corporate social responsibility.

So what was the bank hoping to achieve with this branch? “Our aim is to promote financial education in neighborhoods where banking has not been adopted as strongly,” Woolsey told me, specifically low- and moderate-income neighborhoods. She explained that “financially healthy communities are good for the residents of that community and the community at large, and the bank. We see this as a long-term investment in the communities we serve.”

Journalist Helaine Olen thinks educating students on the basics of balancing a checkbook and saving money is all well and good, but for-profit banks are building branches in schools in large part for the branding – for the money. In her book,  Pound Foolish: Exposing the Dark Side of the Personal Finance Industry, Olen points to a 2010 study published in the Journal of Consumer Psychology which found, in her words, “that people remain most comfortable throughout their lives with the corporate names they were exposed to in childhood.” Corporations are, of course, aware of this and know darn well that getting kids familiar with a brand while they’re young can lead to them choosing, say, “a Capital One credit card a decade or two into the future.”

Union Bank, by charter obligated to maximize profits, concedes that its investment in our leaders of tomorrow isn’t necessarily a bad thing, as far as making money is concerned. “Certainly, I think it’ll be good for our brand that we’re making this kind of investment in young people and in communities that need us,” Woolsey told a reporter at NPR.

Olen, speaking from her home in New York City, told me she’s actually “a huge fan of experiential learning,” so she the idea of students running their own banks in school is intriguing to her. “I actually really like the idea of trying to teach kids banking and savings this way,” she said. “What I don’t like is the brand-awareness. This is not being done out of the goodness of people’s hearts. This is clearly a strategy to introduce people at a very young age to their products.”

From 1910 to 1966, you could walk into to a U.S. post office and set up a savings account, which offered one big advantage to those wary of the private banking system: a government guarantee behind every deposited dollar. When that advantage was extended to the private sector, the system fell apart. Once more, the government is extending state privileges to private firms doing what the government could easily do itself—and in the process, giving for-profit corporations direct access to students as young as 13.

The bigger problem, however, is the whole notion of “financial literacy,” or the idea that if only Americans knew how to manage the money they don’t have then we’d all be better off. Banks like to promote this idea because it shifts blame from them for hooking people on complex, adjustable-rate financial products that ruin the lives, to those of us dumb and desperate enough to trust them. In fact, there’s a whole industry premised on the idea that the systemic problems we see under capitalism are not systemic at all, but the avoidable consequences of individual folly.

“Foreclosure, huge personal debt loads, bankruptcies—Americans today face horrendous financial challenges,” says the for-profit National Financial Educators Council. “Most people experiencing these problems could have avoided them if they had only received a youth financial literacy education when they were kids.”

No, actually: no, no, no. That is not true at all. Statistics show that people generally go bankrupt in the United States of America because they quite literally do not have enough money to live. In 2007, just under two-thirds of all bankruptcies in the U.S. were the result of medical debt, according to a national study published in The American Journal of Medicine; of people having heart attacks and strokes, losing their jobs, and ultimately running out of money to stop them from dying. "Most medical debtors were well educated, owned homes, and had middle-class occupations," the study found. "Three quarters had health insurance."

Young people are saddled with debt from the start, told to go to college if they want a good job only to graduate and find all the good jobs are gone. According to the Institute for College Access & Success, a nonprofit that studies the cost of higher education, over 70 percent of college seniors are loaded down with student loan debt—“an average of $29,400 per borrower.”

It's not binge shopping that is bankrupting most Americans, but the reality of life in a country where wages are stagnant and the prospects grim. Still, capitalism teaches us to blame everyone but capitalists, reducing systemic evils to personal moral failings while dangling out the hope that we too, if we play our cards right and don't mouth off at work, can someday be the ones looking down, mimosa in hand, judging everyone below.

“We all blame ourselves,” Olen told me on the phone, but the truth is it's the ones lecturing us about responsibility, be they mom and dad or Wall Street, who tend to be the most irresponsible. The family losing its home to foreclosure—perhaps because a medical emergency led to a lost job—never got a bailout, but chances are the bank foreclosing on that home sure did. No wonder, then, these banks are busy projecting irresponsibility on others: They want to deflect blame from themselves.

The problem isn’t that people are mismanaging their money, by and large, but that most people don’t even have enough money to mismanage; they are living paycheck to paycheck and as soon as something unexpected happens—a car accident or a child—their precarious situation turns into a legitimate crisis, only there's no one there to bail them out. “Somehow,” said Olen, “I don’t think that is taught at very many of these school financial literacy programs.”