GOP's minimum wage disaster: How Chris Christie and Scott Walker are stepping in it

Their cruel, clueless minimum wage stance is bad politics and worse policy -- but they won't hear of it! 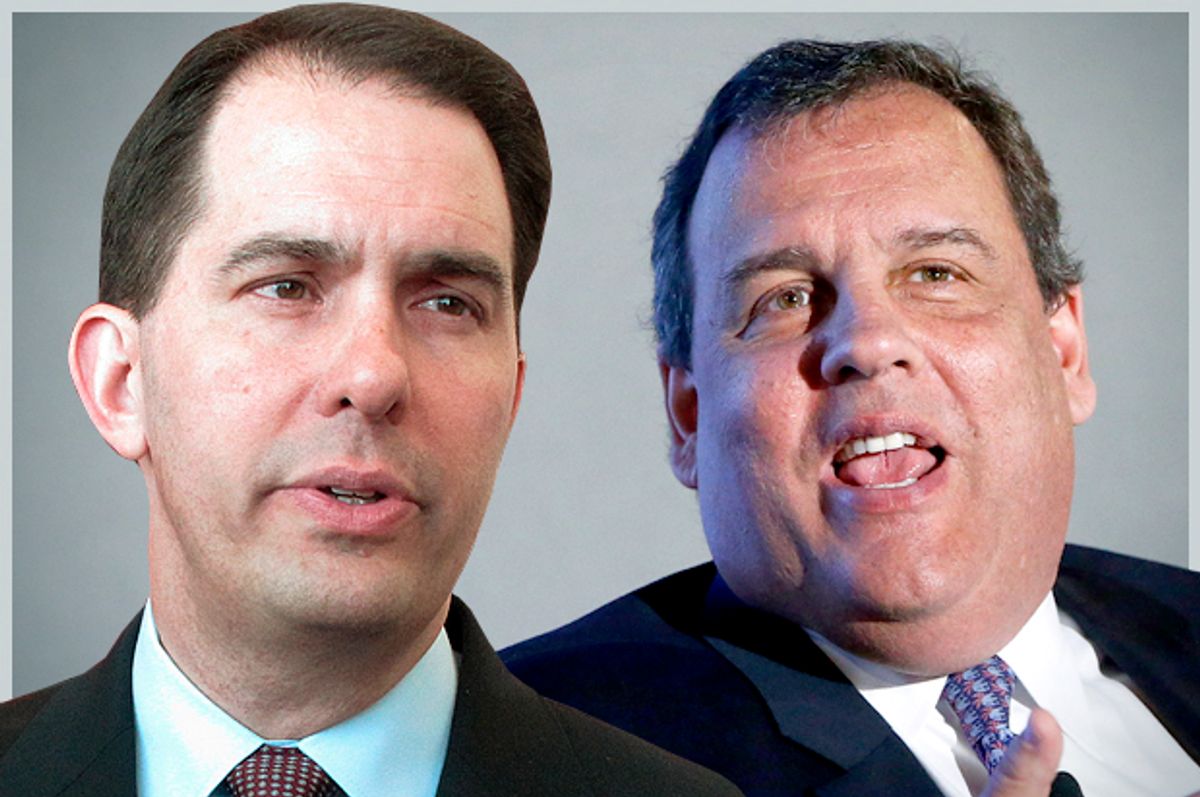 Buoyed by surveys showing that voters overwhelmingly support raising the federal minimum wage, Democrats have held Republicans' feet to the fire this year, pressing GOP candidates and officeholders to take clear stands on the issue. Most have -- and they're overwhelmingly opposed to raising the federal wage above its current level of $7.25 an hour. And as Wisconsin Gov. Scott Walker and New Jersey Gov. Chris Christie attest, it's exceedingly difficult for Republicans to discuss the issue without sounding both callous and clueless.

Christie's minimum wage flub came today -- during a speech before a well-heeled crowd at the U.S. Chamber of Commerce, no less. “I'm tired of hearing about the minimum wage,” Christie said, according to The Hill. “I really am. I don't think there's a mother or a father sitting around the kitchen table tonight in America saying, ‘You know, honey, if our son or daughter could just make a higher minimum wage, my God, all of our dreams would be realized.’”

“Is that what parents aspire to for our children? They aspire to a greater, growing America where their children have the ability to make much more money and have much greater success than they have and that's not about a higher minimum wage,” Christie added.

Set aside for a moment the fact that a dismal labor market leaves many workers with no choice but to take minimum wage jobs. It's true, as Christie argues, that most parents aspire to far more for their children. But in a socially stratified America with limited upward mobility, that's an argument for measures to redistribute wealth and opportunity and to invest in disadvantaged communities with increased education funding, public works projects, and the like. Don't look for a GOP conservative like Christie to endorse such policies.

Then there's Walker, who faces a tough reelection battle in Wisconsin against Democrat Mary Burke. Earlier this month, Walker's administration rebuffed a workers coalition's effort to raise the state's minimum wage in accordance with a state law that calls for the minimum to be a "living wage." The administration responded to their effort by asserting that $7.25 an hour is a living wage -- even though MIT calculates that a single parent would need to earn $21.17 an hour to make a living wage in the state capital of Madison. But don't bother Walker with such figures. The minimum wage, he asserted last week, doesn't even "serve a purpose," explaining that he'd rather help Wisconsinites secure higher-paying jobs than the raise the minimum wage. OK, but what about the 500,000 workers in the state who'd see a raise if the minimum wage went from $7.25 to $10.10 an hour?

The GOP, it seems, is functionally incapable of talking about the minimum wage without botching basic facts or seeming downright insensitive. No, minimum wage hikes don't kill job growth, and no, Joni Ernst, most minimum wage earners aren't high school students who just need a little "starter wage." The callousness caucus, though, will hear none of it.