GOP's contempt in Wisconsin: Why they think voters "might not be as sharp as a knife"

Even pols from Wisconsin insult voters in the state, implying they’re fraud-prone or stupid. What gives? 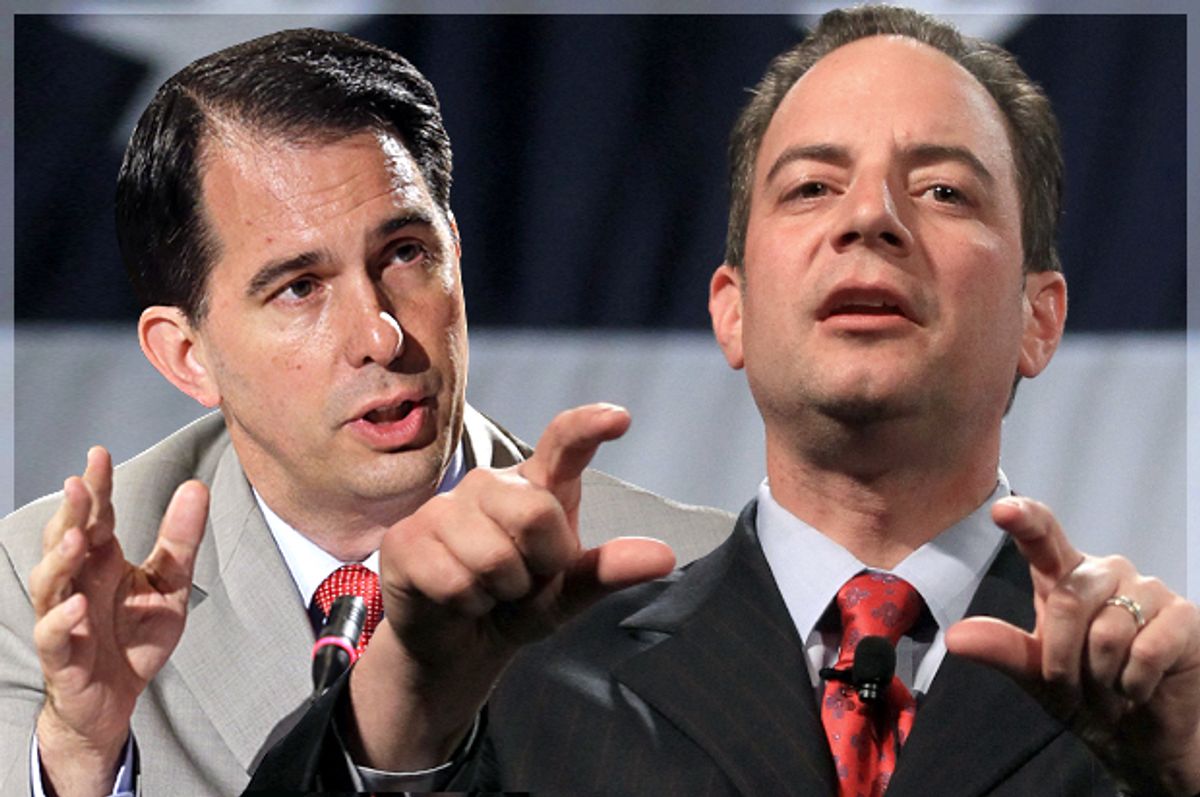 "It's not going to be an easy election, it's a close election. Like I said, much closer than I can even understand why,” Day told voters in Waukesha, a conservative Milwaukee suburb and Walker stronghold. She went on.

"I don't want to say anything about your Wisconsin voters, but some of them might not be as sharp as a knife."

As a former Wisconsin voter, I’d say that’s unlikely to help Walker. But if I still lived there, I’d be backing Mary Burke, so Day would suggest I’m not as sharp as a knife either. So what do I know? It’s clear that Day’s comments, and some recent complaining about the media from Walker himself, reflect growing GOP concern that the race could be slipping away.

But honestly, you can’t blame Day, because her boss, RNC chairman Reince Priebus, also likes to say insulting thing about Wisconsin voters – and he’s from Wisconsin. The Kenosha native frequently talks up the problem of voter fraud in his home state, telling reporters during Walker’s 2012 recall election:

“I’m always concerned about voter fraud, you know, being from Kenosha, and quite frankly having lived through seeing some of it happen. Certainly in Milwaukee we have seen some of it, and I think it’s been documented. Any notion that’s not the case, it certainly is in Wisconsin. I’m always concerned about it, which is why I think we need to do a point or two better than where we think we need to be, to overcome it."

Walker himself endorsed Priebus’ view. “We have seen problems in the past in Wisconsin,” Walker said.  “We want to make sure there are enough volunteers out there.” Those "concerns" led state Republicans to pass a strict new voter ID law -- one that the Supreme Court blocked this month, even as it let Texas' take effect.

Of course, as I wrote here, a 2008 bipartisan voter fraud investigation resulted in 20 prosecutions in the state, mainly of felons who tried to vote after being disenfranchised, and who may not have known they’d lost that right. “They have zero, zero evidence to substantiate it,” said voting rights attorney Richard Saks. “It’s simply demagoguery to whip up fear.” In fact, Wisconsin has one of the cleanest political systems in the country, which is why Scott Walker is tied up in John Doe probes for bad campaign behavior that would be unethical, but legal, elsewhere.

Wisconsin’s worst case of voter fraud in recent history involved a Republican, Robert Monroe, indicted for voting a dozen times in 2011 and 2012, including seven times in the recalls of Walker and his GOP ally Alberta Darling.

I suggested that might indicate the GOP’s obsession with Wisconsin voter fraud was a case of projection. It’s also possible that the same is true of the party’s notion that Wisconsin voters who don’t back Walker are stupid.

Actually, Wisconsin’s Paul Ryan suggested as much after he lost his hometown of Janesville in 2012 twice – once as vice-presidential nominee, and once as congressman (he carried the rest of his district, so he won reelection).

"Well, as you know, Janesville is a very Democratic town, but I'm a Republican," Ryan said in an interview with Janesville radio station WCLO. "But I've always done very well here, because more people saw me not as a Republican but just as a Janesville guy.

"When you join a national ticket for a party, you become more seen as a Republican guy than necessarily a Janesville guy," he continued.  "So I think my image, or the thought people had in their minds of me once I joined the Republican ticket, was more 'Paul Ryan, Republican,' than 'Paul Ryan, Janesville guy.'"

Essentially Ryan is admitting he fooled his hometown voters into believing he wasn’t really a Republican – which is another way of saying they’re stupid.

Lately Walker sounds like he thinks Wisconsin reporters are stupid, too. In an interview with the Washington Post’s Robert Costa, the increasingly whiny governor complained that the race is essentially tied – Burke just erased the 5-point Marquette poll lead Walker had opened up earlier this month – because of the media.

“Only in Madison is someone who’s not the furthest left on the school board considered a moderate,” Walker said. “The bigger challenge to us is that the in-state media buys into that. When she says she’s socially liberal and fiscally conservative, they print it.”

Insulting your home state media in a tight race seems kind of stupid to me, but then, I’m a Democrat.

Wisconsin is bitterly divided in the Walker era, and comments like Sharon Day’s, and Walker’s, won’t make things any better, no matter who wins.