This is the infectious disease you should be worried about 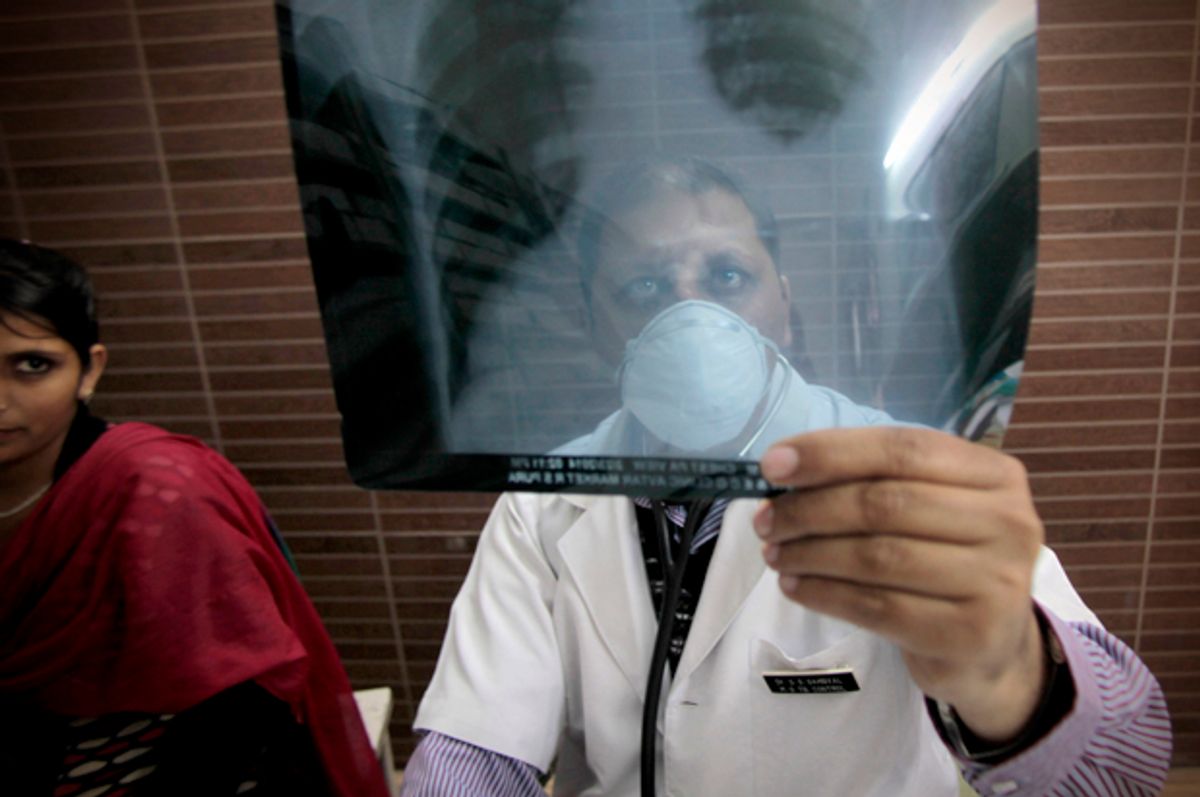 A doctor examines a X-ray of a tuberculosis patient in Jammu, India. (AP/Channi Anand)
--

In his 30 years studying tuberculosis, Dr. Mario Raviglione has tried -- and failed -- to figure out why everyone else keeps forgetting it exists. We'd forgotten about it, for example, in the 1980s -- when Raviglione began his training in infectious diseases in New York City -- even though, as he recalls, he was seeing cases every day among the city's homeless and HIV-positive populations.

That all changed in 1991, when multidrug-resistant tuberculosis (MDR-TB) reached epidemic levels in New York. The city's incidence of TB had more than doubled in the past decade, representing a full 15 percent of all U.S. cases. Nearly a fifth of patients were failing to respond to first-line treatments. Suddenly, the infectious disease was front-page news, and the city scrambled to respond, at considerable cost; it took several years and more than $1 billion for things to finally be brought back under control.

Today, the U.S. only sees about 9,500 cases of TB each year, according to CDC data for 2013, and only 1.4 percent are drug resistant. Yet according to Raviglione, who currently directs the World Health Organization's global TB program, the powers that be have forgotten, repeatedly, that the disease continues to pose a threat.

"They believe that TB is an extinct disease," he told Salon. "I don’t know why."

Not only does TB remain alive and well, it turns out that its global burden is even higher than we thought. According to a WHO report released on Wednesday, 2013 saw nearly half a million more TB cases than was previously estimated: 9 million people became sick with the disease last year, and 1.5 million died. And drug resistance, WHO warned, occurred on average at a rate of 3.5 percent of new TB cases, putting it at crisis levels.

"In many settings around the world," the agency said in a statement, "the treatment success rate is alarmingly low. Furthermore, extensively drug-resistant TB (XDR-TB), which is even more expensive and difficult to treat than MDR-TB, has now been reported in 100 countries." In some places, like Belarus, MDR-TB accounts for as much as 35 percent of all new TB cases.

It's time, in other words, for the world to have its memory jogged.

Unlike Ebola, which strikes quickly, you can be infected with TB and never know it -- it's estimated that a third of the global population harbors TB bacteria. Many are entirely unaware that they even have it, and while it remains in this latent phase, they aren't able to transmit it to others. TB becomes dangerous when it transitions from that latent phase into active disease, something that's more likely to occur in people with weakened immune systems, such as those who are HIV-positive, who suffer from malnutrition or diabetes, or who smoke tobacco. At that point, it can be transmitted through the air to others when a sick person coughs, sneezes, speaks or sings.

Still, the disease is both preventable and treatable: Testing can identify the disease, as well as whether or not it's drug-resistant, in as little as two hours; and the regular forms of the disease usually respond to a standard six-month course of antibiotics. There's even a vaccine, widely distributed in countries where the disease is highly endemic, that is effective at protecting children from the worst forms of TB -- although it's not always effective in adults.

Drug resistance complicates things considerably. It's treatable, but only through a long, expensive and horrendously painful process, involving eight months of daily injections that produce side effects including "psychosis, deafness and constant nausea." Some patients die during the course of treatment, which takes about two years in total. Others aren't able to follow it through to completion. And even when they do, they only have about a 50 percent chance, at best, of surviving. For patients with XDR-TB, the survival rate rarely tops 20 percent.

At the outset, drug resistance is a problem of humanity's own making: It emerges in patients when they are given the wrong drugs or doses, or when they fail to complete a course of treatment. But once patients have MDR-TB, and during the entire time that they're suffering through treatment, they can transmit it to others, who will then have the drug-resistant version of the disease from the outset. That's what happened in 3.5 percent of global TB cases documented by WHO. On average, that number has remained stable, but in some areas of Eastern Europe and Central Asia, it's spreading at alarming rates. "We think that drug-resistant TB is really becoming an epidemic in its own right," Dr. Grania Brigden, the TB adviser for Médecins Sans Frontieres (MSF). And, she told Salon, it threatens to reverse the slow but measurable progress the world's made in combating the disease.

Better, more effective methods for treating and containing the spread of MDR-TB are needed, Brigden said, and so too are strategies for preventing it from developing in the first place.

There are systemic approaches that can keep this from happening; WHO recommends Directly Observed Therapy (DOT), which requires patients to take their drugs in the presence of a health worker, thus ensuring that they complete the entire course. In the U.S., the program is supported through Medicaid and other reimbursement, making it free to patients and healthcare providers. Key to DOT's success, however, is political commitment, a strong healthcare system and an uninterrupted drug supply -- something that many developing countries can struggle to provide.

The funding for all of that is seriously lacking. The Treatment Action Group, a U.S.-based research and policy think thank, released its annual report on TB research and development on Wednesday as well. Of the $2 billion in annual funding needed to ensure that we have the tools to combat the TB epidemic, it found, the world is providing less than a third of that. "That's why we don't have a new regimen for drug-resistant forms of TB," Brigden said. "This is why TB vaccine trials are taking so long. And although we've got new diagnostic techniques, they're still not the point-of-care tests that we've got for diseases like HIV and malaria."

Aside from the fact that they're both infectious diseases, there's not too much that the long-ignored TB has in common with Ebola, the moment's "It" epidemic. Notably, Raviglione pointed out, TB doesn't kill you the way Ebola kills you. Once a patient becomes sick, the symptoms -- coughing, fever and weight loss -- can remain relatively mild for months. That's part of the reason why it's able to spread so effectively: People with mild symptoms can go around infecting others for months before it's detected; ironically, it also may be part of the reason why it isn't given the attention it deserves.

You shouldn't freak out about MDR-TB instead of Ebola, of course. Freaking out isn't really necessary for either. Neither should the diseases be used as political tools, as justifications for racism and xenophobia, or as media spectacles. But if there's one thing our current Ebola panic can teach us about TB, it's that we live in a globalized world, where infectious diseases can hop from one part of the planet to another overnight. "Any infectious disease in any country has to be thought of as a global problem," said Brigden, "and needs a global response to it.”

“One may be slow, one may be rapid, but in the end, you have people suffering," said Raviglione. “In the end they all behave like infectious diseases." And we can't afford to ignore any of them, he added. “Otherwise they punish you, sooner or later."