GOP's public health hypocrisy: If Obama were Reagan, he wouldn’t mention Ebola until 2017

While Republicans blast the Ebola response, let's recall how Ronald Reagan handled AIDS -- the plague of his time 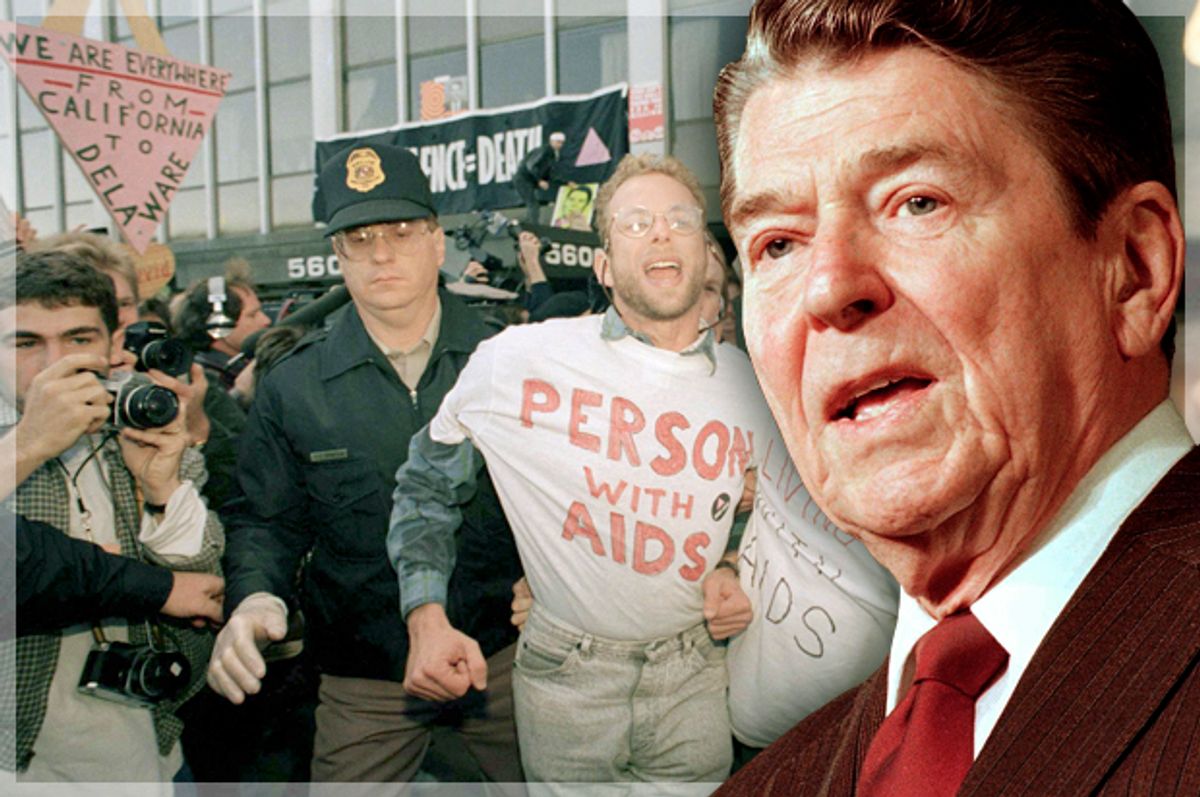 With a fourth confirmed case of Ebola in the United States on Thursday, the Obama administration has continued to balance the recommendations of health experts with the need to assuage an increasingly fearful public. The Centers for Disease Control recently announced new travel protocols requiring passengers arriving from countries ravaged by the epidemic to be monitored for 21 days. In keeping with the recommendations of most epidemiologists, however, the president has stopped short of imposing a travel ban.

But if the right had its way on Ebola, the White House would not only quarantine the entire continent of Africa; it would resurrect and set the Orwellian “terror alert system” to red and have anyone who coughs in an airport sent to Guantánamo.

Republicans have been busy fanning the flames of hysteria ahead of the midterms. Sen. Rand Paul said the disease “could get out of control” and asked conservative radio host Laura Ingraham to “imagine if a whole ship full of our soldiers catch Ebola.” Rep. Darrell Issa, a Republican in charge of the House Oversight Committee, says Obama’s “fumbles, bumbles or missteps ... can no longer be tolerated.”

But for anyone who doesn’t believe themselves to be on a real-life set of “Contagion,” it’s in fact remarkable how quickly the Obama administration has acted to contain the Ebola epidemic. Imagine if, instead of four confirmed cases of Ebola, there were 600, and about half of those infected had died. The CDC declares it an epidemic. At a White House press conference, a reporter asks how the Obama administration is responding to Ebola. “What’s Ebola?” answers press secretary Josh Earnest.

This exchange actually occurred on Oct. 15, 1982. But instead of Ebola the subject was, of course, AIDS, and the interlocutor, Ronald Reagan’s press secretary, Larry Speakes. Reagan — the Republican Jesus — would not even utter the word “AIDS” in public for another three years. By that time, more than 12,000 Americans had died of the syndrome, and 22,702 cases of infection with HIV had been confirmed.

Here’s a partial transcript of that first press conference, which is chilling in retrospect:

Q: Larry, does the President have any reaction to the announcement—the Centers for Disease Control in Atlanta, that AIDS is now an epidemic and have over 600 cases?

Q: Over a third of them have died. It’s known as “gay plague.” (Laughter.) No, it is. I mean it’s a pretty serious thing that one in every three people that get this have died. And I wondered if the President is aware of it?

SPEAKES: You didn’t answer my question.

Q: Well, I just wondered, does the President—

SPEAKES: How do you know? (Laughter.)

Q: In other words, the White House looks on this as a great joke?

SPEAKES: No, I don’t know anything about it, Lester.

Q: Does the President, does anybody in the White House know about this epidemic, Larry?

SPEAKES: There has been no personal experience here, Lester.

Q: No, I mean, I thought you were keeping—

SPEAKES: I checked thoroughly with Dr. Ruge this morning and he’s had no—(laughter)—no patients suffering from AIDS or whatever it is.

Over the next months, the White House Press Corps would erupt in laughter over AIDS 13 times.

There are, of course, important differences between AIDS and Ebola. Scientists and epidemiologists in the U.S. have known about Ebola since the 1970s, and there have been 26 previous outbreaks of the disease. When gay men in urban centers like New York, San Francisco and Los Angeles started showing up in doctors’ offices with Kaposi's sarcoma, a form of cancer common in AIDS patients, the cause was unknown. The HIV virus was only identified in 1982 — a year after reporters first asked the Reagan administration about its response to the epidemic. It would take the Food and Drug Administration another two years to approve an HIV antibody test. The mystery surrounding the disease explains but doesn’t excuse the Reagan administration’s slow response.

And even if Reagan had acted quickly, it’s unlikely the disease could have been contained entirely, though he probably could have slowed the rate at which it spread and prevented many from getting infected. That’s because the incubation period for AIDS — the length of time between infection and when symptoms appear — is about 10 years; for Ebola, it’s two to 21 days. AIDS’ years-long latency period allowed the disease to spread quietly; an infected person could have unknowingly passed the virus along without showing any symptoms for a decade. It also made it harder for epidemiologists to track the disease’s course, which would require asking about every sexual encounter in the last 10 years.

Besides knowing what Ebola is and does, as well as being able to test for it, people show signs of the disease pretty quickly after they are infected. The span of time during which they are infected and contagious but don’t show any symptoms is much shorter, allowing epidemiologists to track its course and quarantine people far more quickly. By the time people started showing symptoms of AIDS, it was far too late to quarantine anyone.

But for all Reagan knew, HIV was just as contagious as Ebola, and patients, just as quick to show symptoms. Reagan has the blood of tens of thousands of Americans on his hands for not acting more quickly on AIDS, in part because of prejudice against gay people, but he would have scores more if the virus had been more contagious. In comparison, we should count ourselves lucky that Obama rather than Reagan is in the White House now.

In high-stakes situations such as these — a deadly epidemic, the outbreak of war — criticism of government is healthy; it pushes lawmakers to act, and engenders a public debate about the best courses of action. And I think Republicans are right that Obama probably should have appointed a doctor instead of a politico as his “Ebola czar.” But the president has acted swiftly and cleared his calendar a number of times to focus on the epidemic. If he were Reagan, he wouldn’t have even mentioned Ebola in public until 2017.