"Homeland"s antiheroine problem: How mentor-mentee relationships are ruining the show

"Homeland" and "How to Get Away With Murder" both feature queasy mentoring dynamics, but one's a lot more troubling 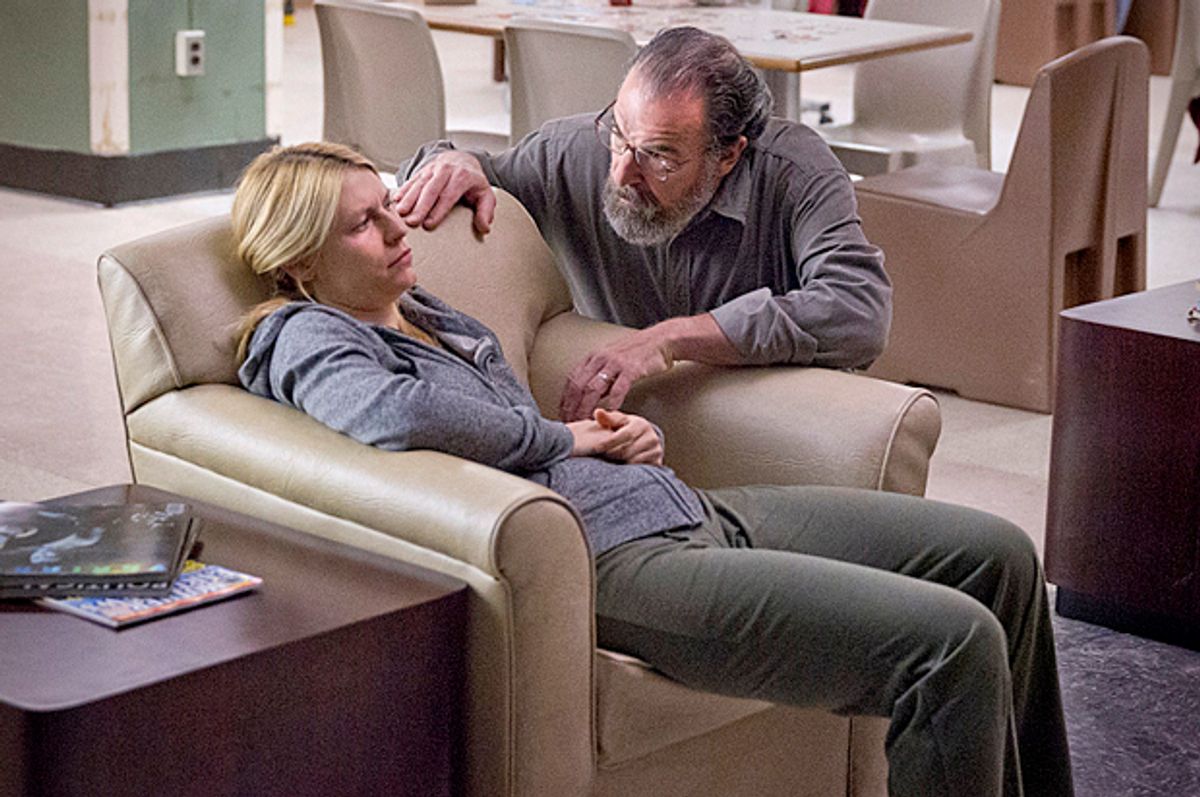 Carrie Mathison (Claire Danes) has spent the last several seasons of "Homeland" blurring the boundaries between her work and her personal life, human evidence of the toll that federal intelligence work takes on the people waging the war on terror. The show explored this brilliantly in its first few seasons with the relationship between Carrie and Damian Lewis’ soldier-turned-terrorist Nicholas Brody, as their mutual suspicion of each other manifested as romantic attraction.

Now that Brody’s out of the picture (executed in Iran in last season’s finale), "Homeland" has lost much of the psychological complexity that made the show so popular. So far, the fourth season of "Homeland" is a string of episodes working frantically to propel the show’s trademark suspense without the driving narrative of Carrie’s evolving relationship with Brody.

There are elements of the fourth season that have been legitimately interesting — and if you really want to give the show the benefit of the doubt, it’s sort of possible to track a coherent psychological arc from where the characters are now to where they were when the show began. But it’s not interesting in quite the same way. Carrie’s relationship with Brody once had the electricity of doomed chemistry — two people who knew way too much about each other, who were able to communicate with each other more honestly than they could with anyone else. It was the type of relationship that often makes a perfect spine for an absorbing television show: Watson and Holmes in "Elementary" and "Sherlock"; Mulder and Scully in "The X-Files"; Adama and Roslin in "Battlestar Galactica"; Masters and Johnson in "Masters of Sex"; Philip and Elizabeth Jennings in "The Americans'"; Marty and Rust in "True Detective." These are complicated relationships, whether romantic or platonic, that evolve over the course of the show and offer a kind of mutual sounding board for the protagonists' character development.  This is often the dynamic around which the rest of the show is built.

"Homeland," in this fourth season, is teasing the audience with two or three different central relationships, seemingly casting about for its new narrative engine. There’s Carrie’s relationship with Peter Quinn, her CIA co-worker, who we discovered a few weeks ago has some unresolved feelings for her. There’s her relationship with Saul, her mentor, who’s left the CIA for a private defense contractor. And there’s her evolving, tenuous and queasily sexual connection with Ayaan, the Pakistani medical student with ties to terrorist cells.

In some ways, these three relationships are a way for the writers to build something like the Carrie-Brody dynamic, cobbled together from three different men. Peter Quinn, played by Rupert Friend, has the same war-veteran PTSD and demonstrated ruthlessness, the same longing looks directed at Carrie from across a room. Ayaan, like Brody, is an enemy agent, and Carrie is manipulating him as much as she’s confiding in him. And Saul maintains the constant sense of emotional distance from Carrie that characterized much of her relationship with Brody.

In its pursuit of a romantic hook, though, "Homeland" is perhaps unintentionally telling a story about mentorship instead. Because Ayaan is far too young for Carrie — not so young as to be illegal, but young — this is not a meeting of equals, this is careful exploitation of the younger partner by the older. It’s all the more unsettling because "Homeland" shows Carrie treating Ayaan as if he’s a child, both before and after they start having sex. (Quinn accuses her, in no uncertain terms, of “fucking a child” instead of doing her job.)

"Homeland" is entering the space of fractured parental relationships — where no one is really anyone else’s parent, but not quite on a similar enough level to be friends, either. The show has played with this in the past—particularly with Saul and Carrie’s relationship, which has had its fair share of exploitative, bizarre behavior. For instance: Saul was instrumental in getting Carrie committed to a mental institution for two months (which was part of a plan they’d set up, but a plan that messed her up nonetheless). In the first season, Carrie manipulated Saul any way she could to keep her investigation of Brody afloat — including one painful moment in the pilot where she reflexively comes on to her mentor of many years, just to get what she wants.

In this season, Carrie has transformed from someone who needs constant mentoring to someone who is constantly mentoring. As the station chief first in Kabul and then Islamabad, she’s got people who work under her. And she is terrible at it. We got a taste of this with her treatment of Virgil and Max, her private surveillance guys, in the first few seasons; now that she’s got Max, Fara and Quinn in their own office and her new employees in the embassy, she seems to rule with a combination of manipulation and withholding. Fara and Carrie might have the most positive dynamic of the bunch -- the younger woman is clearly modeling herself on the former, as she works toward becoming a better and better CIA operative — but even so, Carrie’s inattention leads Fara, in last night’s episode “About a Boy,” to take uncharacteristic risks to get information. Quinn (who seems to have taken the opportunity of romantic brooding to dryly inform everyone of his opinion on things) observes that she’s “good at it,” like Carrie, which is a mixed compliment. Fara has game, but Carrie’s not much of a role model.

"Homeland’s" increasingly perverse twists and turns can still be picked apart and analyzed, but much like the sex between Carrie and Ayaan, it feels mechanical; some kind of spark is missing. And at least some of that is intention. Four seasons in, on a network that historically lets shows run until they are completely creatively exhausted, "Homeland" has lost some of its raison d'être, and what we’re seeing on-screen now feels desperate as a result. (I’ll stand by the Quinn’s-in-love-with-Carrie story line, though it is rife with problems, but Saul getting kidnapped in “About a Boy” is the height of plot expediency designed to keep a big-name actor in the story for the full season.) It would be easier to sit with Carrie’s sudden emotional confessions to Ayaan if there was anything to it besides “here’s something new.”

There is, admittedly, a little more to it. Carrie’s inability to be there for her daughter — to be a mother in action as well as name —is the ultimate fractured parental relationship, and one where, for once, the two parties are actually related to each other. Perhaps her adventure with Ayaan is going to be one aspect of Carrie working out her feelings about motherhood. But with the cradle-robbing sex and the baby-drowning from a few weeks, ago, the only conclusion to be drawn from "Homeland" so far is that Showtime is pursuing this story in the splashiest way possible. Carrie’s not just messed up, she’s gruesomely messed up, in a show that otherwise prides itself on intense verisimilitude.

There's another show on the air that makes a useful counterpoint to this: "How to Get Away With Murder" is doing something that is almost the mirror-opposite of "Homeland," in a setting that is as far from verisimilitude as possible (that is not what law school is like!). Where "Homeland" focused this season on the connection between Ayaan and Carrie, "How to Get Away With Murder" has from the start been built around the power-tilted dynamic between professor Annalise Keating (Viola Davis) and her first-year law student Wes (Alfred Enoch). As of Episode 5, Wes has walked in on Annalise having sex and handed her dick pics of her husband, but their relationship hasn’t (and doesn’t look like it’s going to) stray toward romantic. That doesn’t necessarily make it healthy, either; Annalise is just as uniquely flawed as Carrie Mathison, and as Wes and her other students model themselves on her, they’re internalizing her murky morality and underhanded methods. (I mean, it is called "How to Get Away With Murder.")

But the main difference between "How to Get Away With Murder’s" surrogate mother-son relationship and "Homeland’s" is that in the former, Wes and Annalise actually do tell each other the truth, to the best of their ability. Annalise sees Wes’ talent, but she isn’t afraid to tell him he’s wrong or out of line; Wes is young, but doesn’t let Annalise’s presence cow him. Where "Homeland" (or Carrie, in her plotting) has grafted sex onto the relationship between Ayaan and Carrie to make that connection seem more meaningful, "How to Get Away With Murder" can (for once) afford to be far more subtle because it's written a mentor-mentee relationship that actually makes sense.

It remains to be seen if either Carrie or Annalise is really going to fill out the role of “antiheroine,” that murkily defined category positioned as the gender-swapped version of another murkily defined category that has dominated television for so long. What is clear is that both shows want to explore what it means for women to be in charge — whether that’s behind a drone operator’s screen or in front of a classroom of law students — and going about it in two very different ways. Both have their merits, but I’m leaning toward "How to Get Away With Murder" — if only because when Annalise Keating decides to have sex, it might be just as morally questionable as Carrie’s choices, but at least it's actually hot.