Exploring war and best and worst of American dream with Johanna Skibsrud, author of "Quartet for the End of Time" 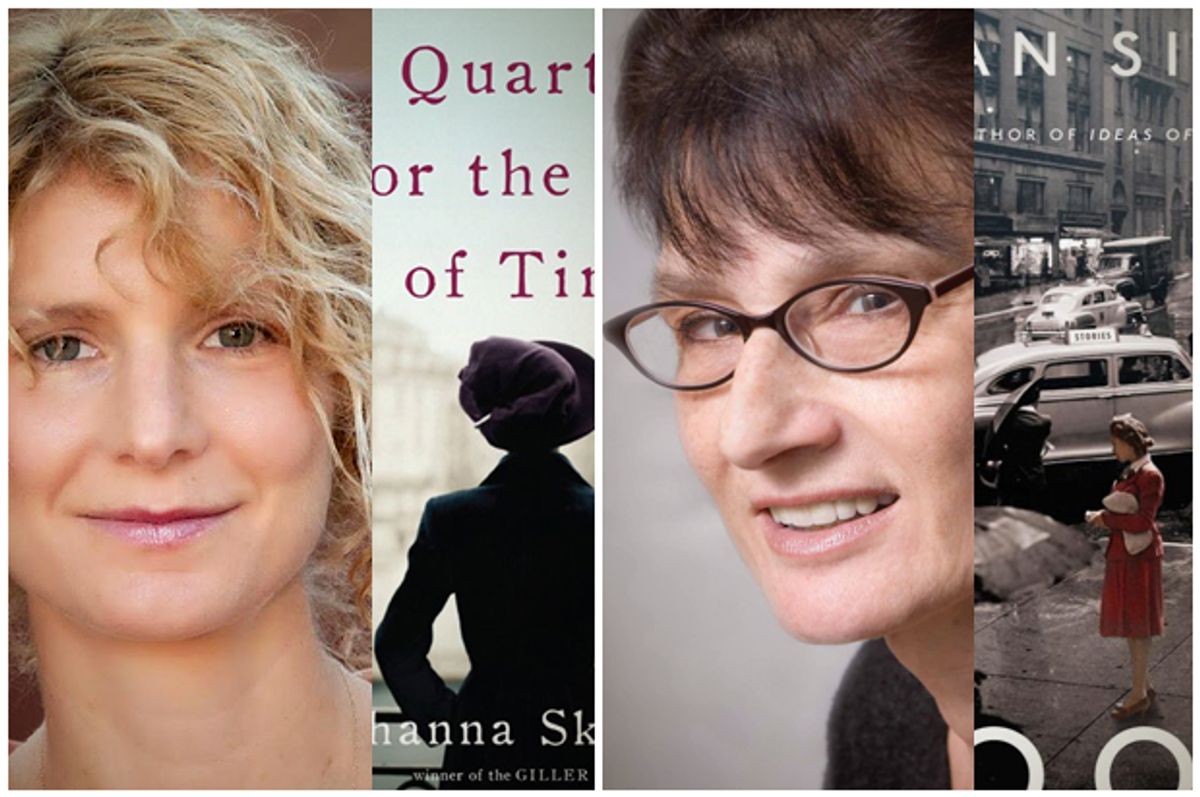 Joan Silber: I was so glad to see a novel -- your new "Quartet for the End of Time" -- beginning with a depiction of the Bonus Army in the 1930s, which I did learn about in school but which is hardly mentioned now (forgotten, along with much of our labor history).  Can you talk about how you came to choose this as a starting point?

Johanna Skibsrud: I first became interested in the Bonus Army March precisely because I hadn’t learned about in school. Until I stumbled upon an oblique reference to it in 2008, I had never heard of the Bonus Army or the riot of 1932. I wanted to think — through my book — about why. Of all the possible stories we could tell of our past, which ones do we choose, and why do we choose them? How is our past, and therefore our future, created by the stories we tell, as well as the ones we do not? The ambiguity surrounding the term “bonus” was also intriguing to me in 2008, at the beginning of the financial crisis. See, the “bonus” was not really a bonus at all – it was an insurance policy, payable at death or 1945, whichever came first. The money the veterans had been promised did not actually exist in 1932—but this was not well understood. Neither was the fact that pushing for an early payout would mean dramatically less compensation than if they waited until 1945. Beginning my novel with the financial crisis of the 1930s and the rather empty promise of a “bonus” for American veterans struck me as a powerful way to explore the imaginary aspects of our financial and political realities and, along the same lines, the best and worst aspects of “the American dream.”

We’re in a literary period where historical fiction, once regarded as the realm of bodice rippers, is now occupied and elevated by serious writers.  Can you talk about the joys and challenges of working in this mode? How did you manage the research and what got left out?

As betrayed by my answer to the last question, I actually think of this novel as quite contemporary. I never set out to be “historical” as such, and in many ways the research was just as creative as the writing process. One story naturally led to another, and then another, and another … I saw all of these stories opening up before me — all the different possibilities of what history might have been, or could still become. Again, my goal was not to capture a specific moment in a history that had (more or less literally) already been “written,” but to convey this dizzying, ecstatic, often terrifying experience, which is time itself.

I’m naturally interested in the ways the book talks about time and uses time. I’d love to hear about struggles with structure -- and the not-so-easy task of addressing issues of time directly.  And what was the role of the Messiaen Quartet that gives the book its title?

I open with an epigraph from Messiaen. He writes: “Rhythm is, in essence, alteration and division. To study alteration and division is to study time. Time — measured, relative, physiological, psychological — is divided in a thousand ways, of which the most immediate for us is a perpetual conversion of the future into the past. In eternity, these things no longer exist. So many questions! I have posed these questions in my 'Quartet for the End of Time.'” This epigraph is important to me because it identifies the shared ambition of Messiaen’s "Quartet" and my own. Messiaen was interested in transcribing the sounds of the living world around him (birdsong, for example, engine sounds …); I wanted to try to translate, or transcribe, or further interrogate, Messiaen’s musical reflections on rhythm and time into words.

The story deals with repeated episodes of betrayal, collusion, spying and counterspying.  Characters often have difficulties deciding which side they’re on.  Can you say how you were first drawn to this theme and how you feel it plays out in the novel?

Messiaen first completed and performed his "Quartet for the End of Time" in 1941, in a German prison camp. To have created such beauty out of the chaos and terror that was the Second World War is inspiring, but it’s also unsettling — or at the very least extremely complicated. There was concern among the musicians that taking part in the debut performance of Messiaen’s "Quartet" was — despite Messiaen’s vehement protestations — a form of collaboration. Messiaen believed strongly that art — and faith (he was deeply religious; "Quartet for the End of Time" is inspired in large part by the Book of Apocalypse) — was and should be absolutely apolitical. Again, there is something inspiring in this … but something terrifying as well. There is, and has always been, a very thin line that separates generative creative ideas, and positive ideals, from rigid and potentially extremely destructive ideologies. I wanted my book to think about, and run up against, this line. The time period I chose is one in which a lot of very intelligent people swung their allegiances from the extreme left to the extreme right. I wanted my book to ask — through the bewilderments and shifting allegiances of my characters — how this was (and remains) possible.

The wonderful details about codes and code breaking in wartime made me ponder the ways this is a story about secrets and what’s hidden.  Can you say more about your interest in this as a writer?

I guess what I’m primarily interested in — what this book is primarily interested in — is how we make, and manage to convey, meaning. My interest in rhythm and time, for example, is really an interest in how we measure experience, how we articulate that experience to ourselves and to others. My character, Alden, believes he has discovered a secret code hidden within the pages of American newsprint. He doesn’t yet know the key to the code, but he continues to hope and believe that he’ll discover it one day. To this end, he compiles more and more of this “uncracked” code, but in order to protect his own interests, he is forced to spend most of his time further codifying the material rather than deciphering it. This is a comment — or a reflection upon — the structure of language itself. How meaning is endlessly interpretable and can, like rhythm, be endlessly deferred.

The characters are actively caught up in the politics of the past, relying on old categories of thought. It struck me, for instance, that in 2014 we don’t often see a plot where the Communist Party is a force for evil.  Can you talk about how you balanced a contemporary sensibility with the task of entering another era?

It was important to me to try to delve into the complexities that existed on both sides of the line in terms of the political and social issues of the 1930s. If I didn’t manage to do that, I wouldn’t have come even close to the question of why so many people swung right from left, or back again. It’s easy for us now to look back at the paranoia that existed in the first part of the 20th century in regards to the presence and influence of the Communist Party — and easy to regret (at least for many of us) that things didn’t go a little differently back then. But, of course, there was corruption on both sides, and a really unfortunate influence from Soviet Russia, where history was always bound to play out differently. If we don’t look at those aspects of the history, we don’t really look at the history at all. And if we don’t really look at the history, we remain blind to those aspects of the history that carry over into — or, rather, have become — our present moment.

Joan Silber's latest book of fiction, Fools, published in spring 2013 by Norton, was on the Long List for the National Book Award and nominated for the PEN/Faulkner Award.