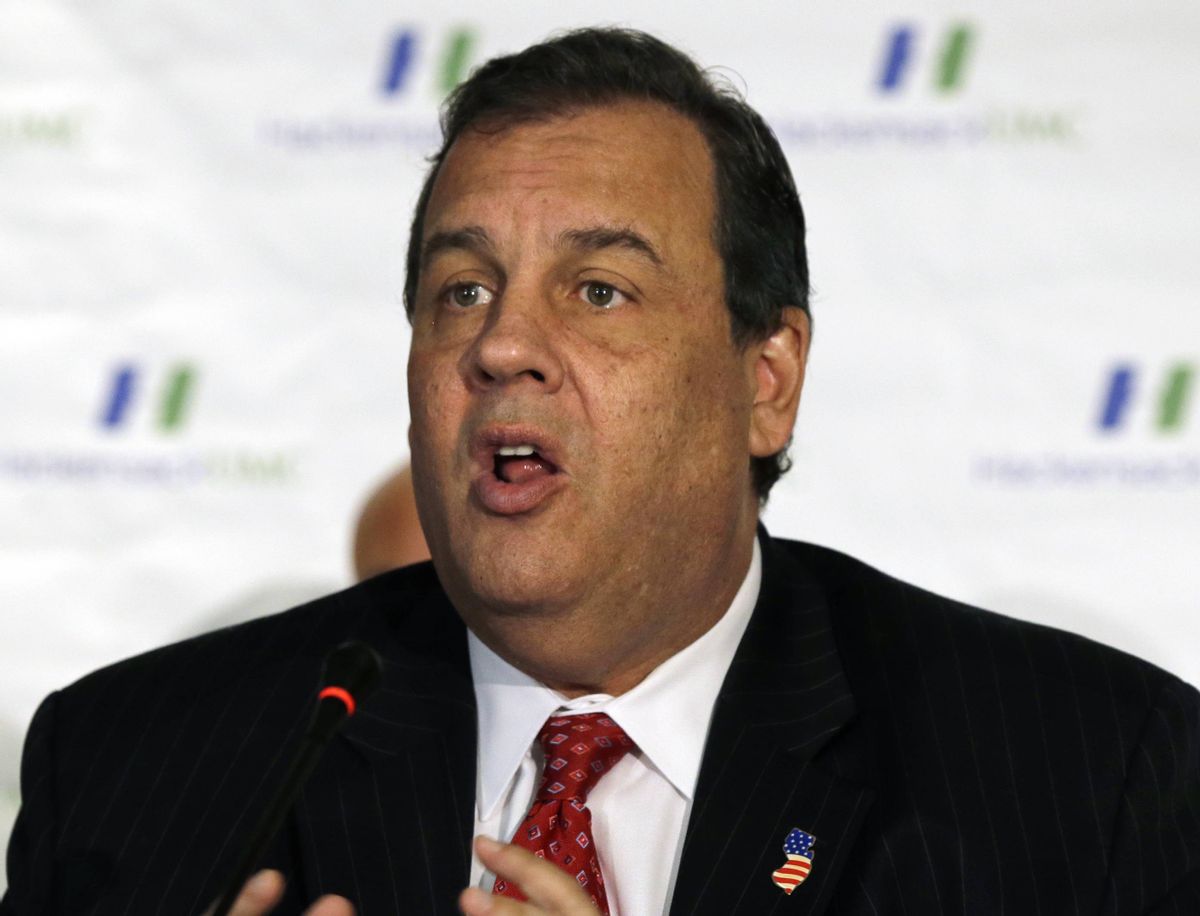 In this Wednesday, Oct. 22, 2014 photograph, New Jersey Gov. Chris Christie addresses a gathering over the state's preparedness for Ebola treatment at Hackensack University Medical Center in Hackensack, N.J. Christie on Sunday, Oct. 26, 2014 defended the mandatory, 21-day quarantining of medical workers returning from West Africa as necessary to protect the public and predicted it "will become a national policy sooner rather than later." (AP Photo/Mel Evans) (AP)
--

It's not just Jon Stewart calling bullshit on New Jersey Gov. Chris Christie (quoth: "Why does Christie have to be such a dick about everything?"). Editors at the prestigious New England Journal of Medicine are speaking out against the mandatory quarantine for health workers returning from Ebola-stricken nations that the governor, along with New York Gov. Andrew Cuomo, introduced Friday.

What it comes down to, the authors write in an editorial published late Monday, is that "we think the governors have it wrong."

"We understand their motivation for this policy -- to protect the citizens of their states from contracting this often-fatal illness," they write, giving the governors the benefit of the doubt about a policy that others have seen as blatantly politically motivated. "This approach, however, is not scientifically based, is unfair and unwise, and will impede essential efforts to stop these awful outbreaks of Ebola disease at their source, which is the only satisfactory goal."

To drive that point home, they continue: "The governors' action is like driving a carpet tack with a sledgehammer: it gets the job done but overall is more destructive than beneficial."

Late Sunday, Cuomo tempered down his policy for New York, saying that while returning health workers will still be obliged to follow a 21-day quarantine, they can do so from their own homes, and will be allowed visitors. A coalition of AIDS activists and public health experts criticized the decision, however, arguing that any mandatory quarantine "goes against evidence-based, CDC-recommended public health practices grounded in science" and could contribute to the stigmatization of patients.

In the NEJM editorial, the authors reiterated that stemming the Ebola outbreak at its source is essential to protecting the U.S. from further infections, and they echoed the fear that the governors' policy would discourage much-needed health workers from going to West Africa. "If we add barriers making it harder for volunteers to return to their community," they wrote, "we are hurting ourselves."

Christie continued to defend his actions Tuesday morning; appearing on NBC's "Today," he told Matt Lauer that he's not budging, because a quarantine is what the American public wants. “Governors ultimately have the responsibility to protect the public health and public safety,” he insisted, ignoring the fact that the people with training and expertise in how to protect public health and safety think he's doing more harm than good.