How police brutality changed me: "He crushed his knee into my neck. I could hardly breathe"

I was on the ground before I knew it, knee to my neck. But in an age of social media, would it have even happened? 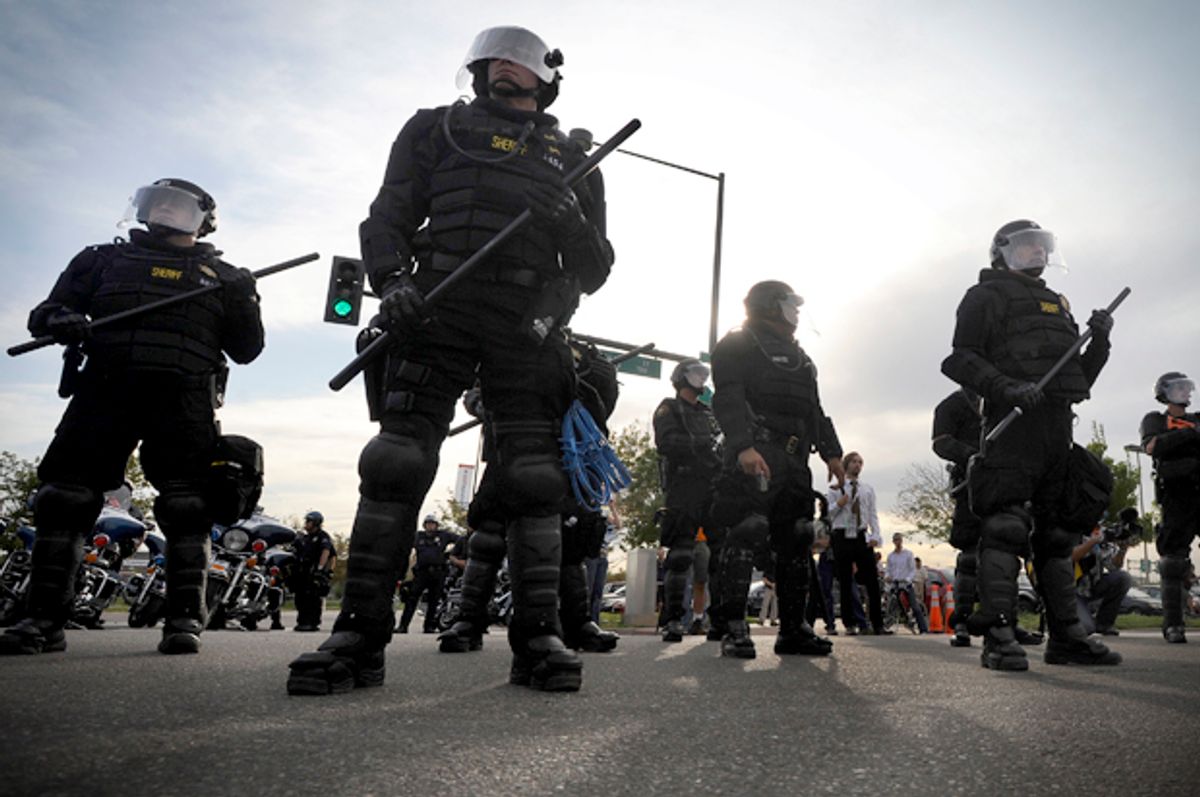 When I learned about the nationwide vigils in August in memory of Eric Garner, Michael Brown, and the many others who’ve been killed by police this year, I knew I had to go. It felt important. More than that: It felt urgent.

At the same time, I was afraid.  What if things got violent? A panic attack wasn’t out of the question. Because though you’d never guess it by looking at me—I’m a white woman in my 40s—I’ve experienced police brutality. Most of the time I can banish the memories and push aside the fear that still lingers, but not this year.

I was 21 and a college student in Minneapolis when Iraq invaded Kuwait and president George H.W. Bush began making the case for war. An anti-war demonstration was planned for the day the president was speaking at the Hyatt Hotel—which happened to house the coffee shop where I worked.

That warm fall morning, six-foot wide banners proclaimed No Blood for Oil, and chants of “The people, united, will never be defeated!” beat steadily through the crowd of hundreds.

I was standing with one of my coworkers, my stepmother, and my aunt, when a commotion near the hotel’s side entrance caught my eye: Police officers. Punching someone.

My coworker had a camera (this was pre-iPhone, pre-digital cameras even), and without thinking I snatched it from him and squeezed through the crowd, snapping photos as I walked.

I was a few feet away when the punching officers turned toward me. One of them yelled something, but I didn’t register what it was—and then I was on the ground.

Four officers pinned me down, one by crushing his knee into my neck. I could hardly breathe. I heard my aunt, nearby, screaming, “The world is watching you!”

I was jerked up from the ground and shoved inside the Hyatt’s cavernous parking garage.

Three other protestors were already face down on the floor. An officer threw me to the ground, sending pain blazing through my shoulder as he yanked my right arm back before handcuffing me.

Peripherally I saw a group of security guards, including Jeff, a coffee shop regular.

Then everything went black.

Someone had placed a square of black fabric over my head.

“What the hell?” one of the other protestors said, the chaos giving way to real fear. We each said our names, as if knowing them would provide some measure of safety.

The camera I’d been using was on the floor next to my head; it had landed there when I was shoved to the ground. I took comfort in that, too. The images it contained were proof.

Somewhere behind us, dogs began growling and snapping, and the four of us fell silent.

Footsteps approached. It sounded like the person was coming straight for me; I pictured my head being squashed like an insect. Then the footsteps stopped, and I heard my camera being opened, and the film canister pulled out.

We were brought to the police station and charged with disorderly conduct.

I got my friend’s camera back: empty.

My phone was ringing when I got home. Reporters wanted to talk. I was numb until someone from the Star Tribune said, “Those police were too big to be on top of you. I wanted to make sure you were OK.”

In the days that followed, blue then yellow bruises would bloom over my entire body. Every single part of me would ache. And my injuries weren’t the worst: An officer had struck a woman in the chest with his nightstick—breaking her sternum. The lawyer who was representing her wanted to represent me.

He subpoenaed videos from the news channels. I could barely watch—my face was contorted so painfully as I thrashed around, trying to get the policemen off me.

As bad as those images were, my lawyer reminded me, our case wasn’t about police brutality. It was about the first amendment. The stolen film. The problem was, we had no way to prove it.

The police were denying everything. Vehemently.

After I was interviewed on the local news, the deputy chief of police called my claims “absolute rubbish.”

“The world is watching you,” my aunt had yelled that day, but there had been no cameras inside the parking garage. And the only people who’d been there weren’t talking.

Jeff, the security guard, had stopped coming to the coffee shop. I tracked him down at the hotel and asked him what he’d seen that day.

“Nothing,” he said, already walking away.

My body held a constant thrumming of fear, like a tuning fork. I could hardly sleep, and when I did, I’d wake with nightmares about policemen scaling the brick walls of my apartment building and hurling themselves through my windows.

That winter, with no explanation, my disorderly conduct charge was dismissed.

A few days later, Jeff appeared in the coffee shop. He apologized. He said he’d seen everything. When I was handcuffed he heard my arm pop and was sure it was broken. He saw a police officer open up my camera and expose the film—though he didn’t know what happened to it after that.

That same afternoon, the deputy chief of police called.

“I think I owe you an apology,” he said. “It seems you were right.”

Though my lawyer had already given up on my case, I could have pressed it. But I was exhausted, and still terrified.

The terror has lessened in the years since, but the trepidation, the anxiety at the thought of facing large numbers of police, has yet to disappear.

And it would be decades before I’d work up the nerve to attend another protest.

Union Square was packed when I arrived for the vigil with a friend. It was quiet. Somber. The crowd started moving up Broadway. My friend and I marched too, putting up our hands and chanting along with everyone, “Hands up, don’t shoot,”—a reference to Michael Brown’s last words before he was shot 11 times.

Anxiety hummed throughout my body, but the thousands of other people there made me feel calmer.

Block by block we inched toward Times Square. Then we stopped. The police had put a barrier at 42nd street. “Go home, people,” they yelled.

I turned around. Behind us was a solid line of police officers. Behind them, police vans.

Fear shot through me.

“Should we go?” my friend asked. She pointed—the subway was right there. It would be easy.

I held my phone aloft, stood on my tiptoes and took pictures of the crowd. Fear, I told myself, couldn’t control me.

I turned, and took photos of the police. Other people were doing the same thing; the police didn’t move.

I took a deep breath. I felt safe. Safer, anyway. Because now, in the age of Twitter and Facebook and Instagram and everything else—not only is there no film to steal, but mine is far from the only camera. Now, the world really is watching.