Report: No-fly zone over Ferguson was aimed to keep media away 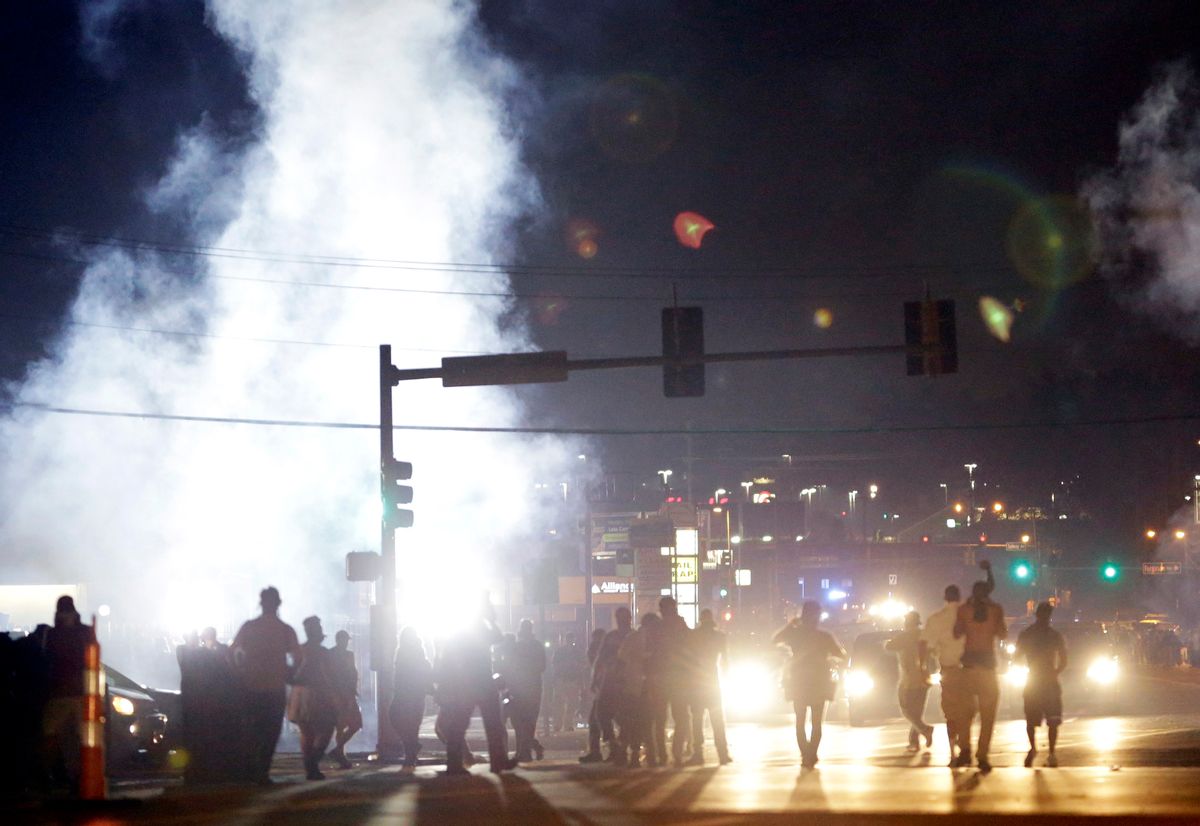 In this Monday, Aug. 18, 2014 file photo, people stand near a cloud of tear gas in Ferguson, Mo. during protests for the Aug. 9 shooting of unarmed black 18-year-old Michael Brown by a white police officer. The U.S. government agreed to a police request to shut down several miles of airspace surrounding Ferguson, even though authorities said their purpose was to keep media helicopters away during protests in August, according to recordings of air traffic control conversations obtained by The Associated Press. (AP Photo/Jeff Roberson)
--

The Federal Aviation Administration agreed to a St. Louis County Police requested no-fly zone over Ferguson, Missouri, which allowed for exemptions for police helicopters and commercial flights, but restricted the media, the Associated Press is reporting. The AP obtained recordings via the Freedom of Information Act, which revealed that the 12 day restriction of 37 square miles of airspace around Ferguson may have deliberately hampered freedom of the press.

"On Aug. 12, the morning after the Federal Aviation Administration imposed the first flight restriction, FAA air traffic managers struggled to redefine the flight ban to let commercial flights operate at nearby Lambert-St. Louis International Airport and police helicopters fly through the area — but ban others.

"'They finally admitted it really was to keep the media out,' said one FAA manager about the St. Louis County Police in a series of recorded telephone conversations obtained by The Associated Press. "But they were a little concerned of, obviously, anything else that could be going on.

"At another point, a manager at the FAA's Kansas City center said police 'did not care if you ran commercial traffic through this TFR (temporary flight restriction) all day long. They didn't want media in there.'

"FAA procedures for defining a no-fly area did not have an option that would accommodate that.

"'There is really ... no option for a TFR that says, you know, 'OK, everybody but the media is OK,'' he said. The managers then worked out wording they felt would keep news helicopters out of the controlled zone but not impede other air traffic."

The restricted airspace was requested because, according to police, shots were fired at a police helicopter. The Associated Press is reporting that there was no damage to any police aircraft, and an incident report could not be produced.

The restriction of airspace, reportedly aimed at stopping the press from getting images of a volatile and important act of civic unrest, would be a violation of the constitutional right of freedom of the press.

"FAA cannot and will never exclusively ban media from covering an event of national significance, and media was never banned from covering the ongoing events in Ferguson in this case," FAA administrator Michael Huerta said in a statement on Sunday. He also said that he didn't know of any press outlets that complained about the restrictions when they were in effect.

The flight restrictions remained in effect until August 22, around a week after the name of the officer who shot Brown was released. Motives were apparently questioned by the FAA, even though the no-fly zone was approved. The AP reported:

"One FAA official at the agency's command center asked the Kansas City manager in charge whether the restrictions were really about safety. 'So are (the police) protecting aircraft from small-arms fire or something?' he asked. 'Or do they think they're just going to keep the press out of there, which they can't do.'"