Elections are the one time it's "worthwhile" to watch cable news. Here's how the networks will humiliate themselves 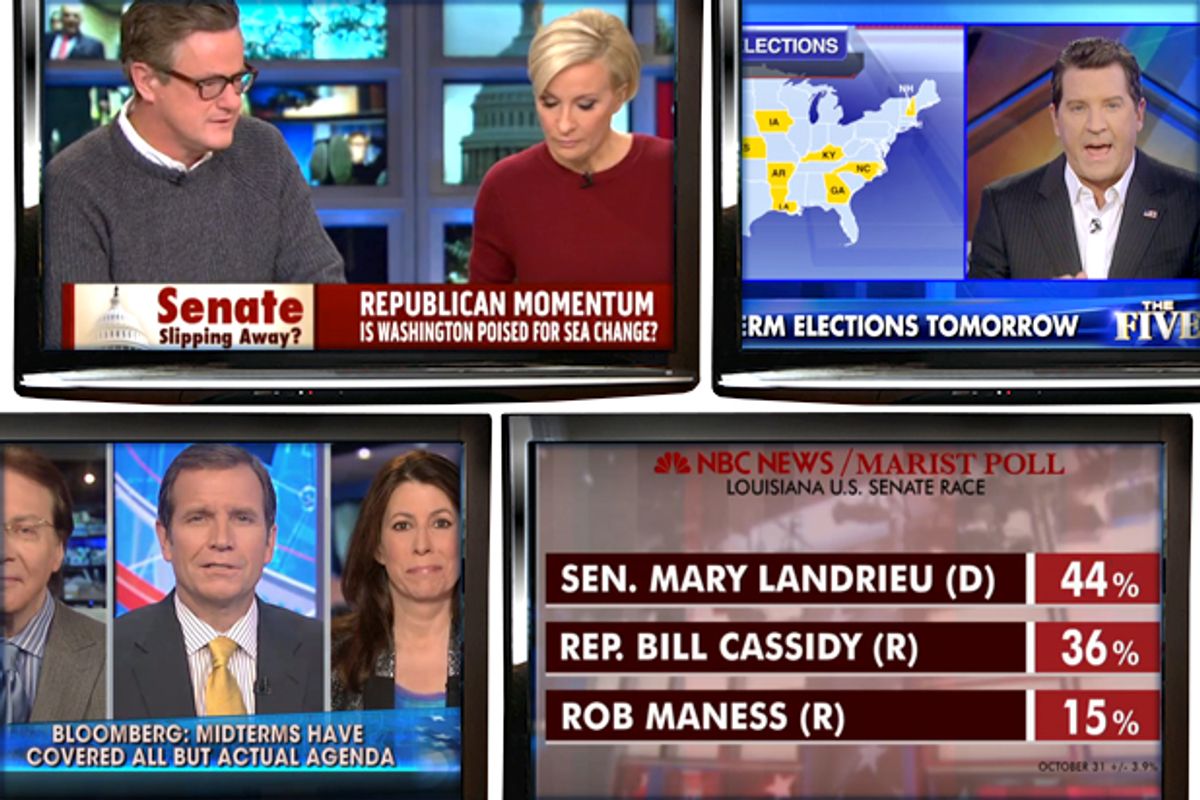 Election night is such a magical night: It's when you find cable news at its most farcical. And this says something.

It's really the only night of the year that we'd recommend watching cable news. It's funny and it's the best way to monitor election returns. Actually, that latter, informative aspect to the recommendation is now mostly moot with Twitter ... so, OK, just watch cable news for the funny. Hell, you can even invite your friends over and have a cable news election returns party. Cook up a spinach-artichoke dip and purchase a few gallons of 100 percent grain alcohol and some Solo cups. Look at that, you've suddenly got a whole social night planned, all about watching cable news. Maybe you're not such a loser after all?

But which of the three (3) cable news channels do you want to watch? So many choices, and each has its own pleasures and disasters. Here's your guide.

What CNN's coverage lacks in compelling or provocative analysis is made up with technological gimmicks. John King spends the evening playing with any number of kewl Y2K "touch screens," just swipin' left and right and writing numbers on his touch screen. Sometimes the touch screens face technical malfunctions, and so producers return us to footage of Democratic Party officials arguing with representatives of the Republican Party. Sometimes there are holograms.

But the main event of CNN's election night coverage is obviously Wolf Blitzer. Never has a man with such little idea how to interact with a camera or a fellow human being been given so many hours in front of a camera, interacting with human beings, than Wolf Blitzer has at CNN. He will remind you about every 90 seconds that the channel you're watching is CNN. He will also constantly reassure you that CNN will be "following this" or "checking back on this" -- the key state or two that's closest -- "all night." When a presidential election comes down to Ohio, Wolf Blitzer will say "we'll, uh, we'll be following Ohio, the presidential race in Ohio, uh, all night, here on CN, huh that's CNN, we'll be checking in on, uhhio, Ohio." So if control of the Senate comes down to Iowa, and the early returns show a close race, rest assured that CNN will uh be uh tracking the uh returns in uh this uh corn cow state.

It will start early in the morning and not let up in intensity until the moment all polls are closed: if there is voter fraud, Fox News' Chief Election Investigative Correspondent Team will find it and expose it.

In the Fox News editorial mind-set, it is very easy to spot voter fraud: You just go to polling stations where there are long lines of black people waiting to vote, and presume they're doing so illegally, for perhaps the fourth or fifth time in the day. Field reporters with names like Griff Jenkins and Dirt McFluffpants will "infiltrate" predominantly African-American polling stations and annoy voters about why they're voting illegally and demand to see their driver's licenses and birth certificates. Inevitably one hassled person in line will ask them to fuck off. Griff McDirt will pretend to be pushed to the ground and wail in pain, and then report from his hospital bed that black voters are trying to steal elections -- he has hard video evidence of them in line, trying to vote. The panel back at headquarters will express fury at these New Black Panther Party tactics and then delve into a discussion about the epidemic of black-on-white violence, which is actively fostered by the welfare policies of President Barack Obama.

As nighttime rolls in and with it the likelihood that Republicans will find themselves with a slender Senate majority, there'll be champagne popping, sure, and then analysis. Serious analysis. Questions for the president and Democratic Party. Can there be any doubt, Sean, that the Democratic Party has permanently lost the faith of the American public and should be banned? Well, yes, Karl, but my question is this: Will President Obama now have the decency to resign? Isn't this the signal that the American people are sending him -- to resign immediately? And here's the other thing, Brit: A pretty girl likes to be complimented on her appearance, that's why she dresses like that.

It's bound to be a gloomy, depressing election night at MSNBC, so tonight's silver lining will be the Great Democratic Wave in Statewide Races of 2014.

Expect intensive coverage of the fact that Democrats will pick up some governors' mansions and lose a couple others for a modest net gain (all while losing lots of state legislatures). BAM -- SUCK IT, RETHUGLICANS. America will have chosen uniformly that it loooooves the Democratic Party, what with those couple of governors races they'll win. Is it time for the Republican Party to disband? They hate women and birth control, that's what the public is saying on this night, election night in Blue America 2014.

There will be "Big Ed" Schultz perhaps chatting with a member of a trade union in Madison, Wisconsin. Chris Matthews will say, I knew Jack and Bobby Kennedy, OK maybe I didn't, but I knew Tip O'Neill and Jimmy Carter and if Tip O'Carter were alive today, golly, he'd be proud of this Democratic performance tonight. It's like what I say to the guys back in the neighborhood in Pennsylvania, in Pennsylvania. What do I say, I say to them, here's what I tell them.

Then one of the smart people like Chris Hayes will interrupt and say, "Umm should we talk about how Democrats lost like nine Senate seats?"

The mood will turn dour. Al Sharpton will quietly sneak off the set and mutter something about "another gig" across town. Chris Matthews will remember that he actually hates the Obama administration and thinks they need to stop talking about this women's birth control business, it's costing them Irishtown and the Italian ghettoes and other assorted "people who work with their hands, tough hands." Rachel Maddow will get into a hollering match with him and make some drinks. A lot of drinks.