I made the negative ads I hate: Our infuriating, anti-democratic system leaves no choice

I'm the teacher in two N.C. negative ads. I'd rather talk positive policy fixes, but can't until politics changes 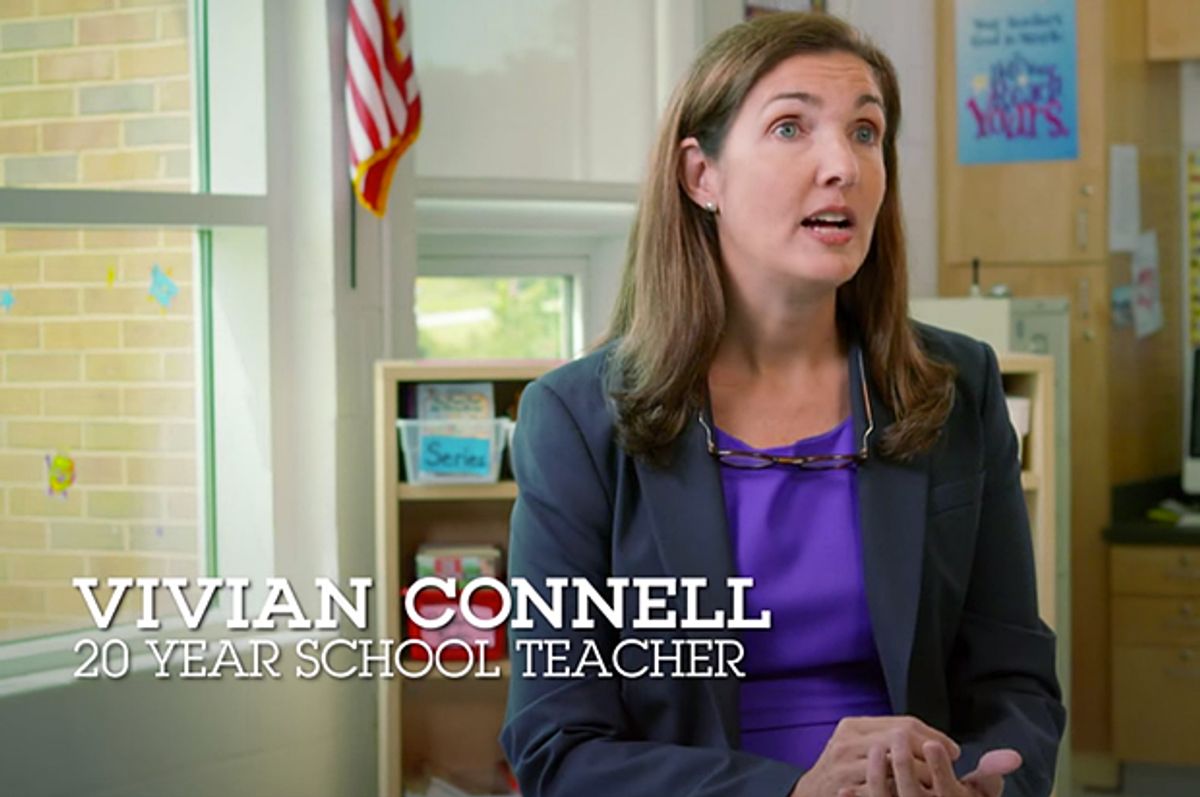 Do you loathe the recent barrage of negative political ads? Are you offended that over $1 billion dollars spent on midterm election ads could have gone toward roads, schools, and deficit reduction?

Polling says most Americans are. But polling also indicates that these ads genuinely impact elections.

I hate these ads.

Yet I am the teacher appearing in two commercials produced and aired by the National Education Association.

How can I disapprove special interests airing political ads and yet participate in a major election ad buy?

That’s easy: The ads are a merely a symptom.

We must live with this symptom until we treat the real illness in our body politic: allow special interests to spend unlimited money in elections, thus permitting the rich to buy political influence. It’s a disgrace, and every Democratic U.S. Senator recently voted for an amendment to overturn Citizens United and restrict campaign spending. This move would help insure that every voice has equal volume in our democracy.

Thus, if a citizen chooses a political platform espousing certain ideals – guaranteeing every child quality public education, protecting voting rights, making health care available to every American, and creating a level playing field on which all might have genuinely equal opportunity – then one must be willing to combat the outside money of groups that would privatize the public sector for their profit, restrict voting rights, and protect the status quo over the greater good of society.

By participating in the NEA ads, I joined 3 million educators advocating for students and strove to combat the policies of the extreme right – policies I have seen enacted since 2010 in North Carolina to the detriment of schools, women, minorities, and lower/middle class families. I am proud of the ads; I stand by them.

Much fuss was made about the difference between the NC General Assembly’s failure to fund public education at the same level being called a “cut.” Not surprisingly, the Wall Street Journal characterized it as “bad math,” while ignoring the egregious math behind the late, insufficient, and misrepresented teacher raises, given only because they became political necessity.

Before filming, I discussed this characterization with a prominent accountant who laughed at the distinction, saying, “Anyone with a rudimentary understanding of accounting would call this failure to fund ‘a cut!’”

Consider: If your child is one of four who have to split a large pizza, your child gets two slices. If the next day, there are 16 kids and two pizzas, the providers may have increased the amount they spent on pizza, but your kid gets a smaller dinner. What matters to you?

I would vastly prefer to discuss details of education policies under Speaker Thom Tillis that have reduced resources, cut positions, demoralized teachers, unfunded our nationally-lauded N.C.Teaching Fellows Program, left 12,000 needy children waiting for access to pre-K, diverted tax payer funds to private, largely religious schools (lawsuit pending), attempted a preposterous merit pay plan (struck down by courts), attempted to remove minimal due process protections from teachers (also struck down), and moved to deregulate charter schools, from which their cronies will profit and which will not face accountability via testing or teacher certification.

I’d like to take every voter line by line through the history, the statutes, the budget, and the lawsuits. I earned my J.D. so that I could.

Therefore, as long as we permit these ads to be a decisive force in elections, I’ll lend my voice to the NEA, or to any group promoting equitable access to quality education – the “liberty and justice for all” to which Speaker Tillis merely gives election season lip service.

If you hate the ads, remember that Senator Kay Hagan voted to regulate soft money in politics, restore equal influence to all voices, and put the $1 billion plus of this election cycle to better use.

Remember also that I am a career teacher dying of ALS; I have nothing personally to gain. Speaker Tillis and his special interests have much to gain.

Every senator in Thom Tillis’s party voted to keep unlimited money in politics.

So I’ll use every medium available to shout him down.