The Times thinks the GOP civil war is over and the establishment has won. Here's why that's total nonsense 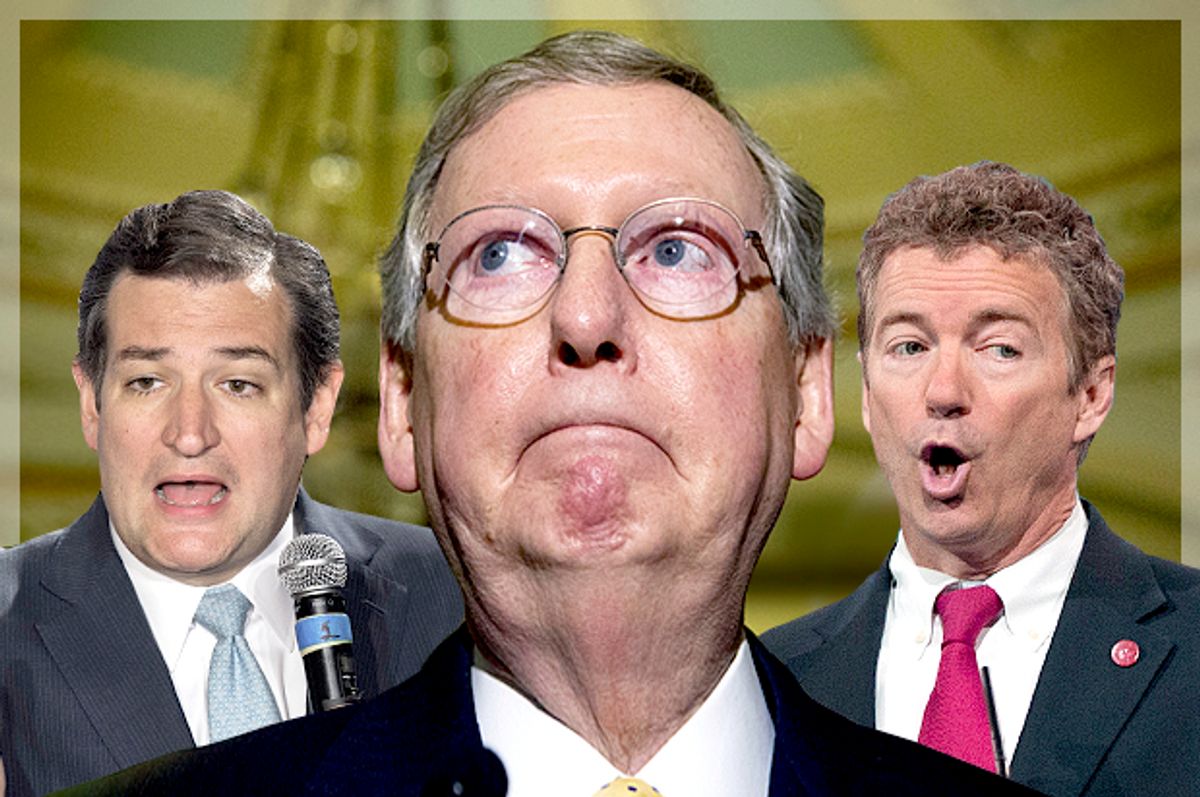 After blowing what at first looked like two can’t-miss opportunities in 2012 and 2010, the Republican Party was finally able on Tuesday to win back control of the U.S. Senate. Riding a wave of conservative anger (which, thanks in part to liberal apathy, flowed mostly unimpeded), the GOP almost had a clean sweep in its Senate campaigns, while also expanding its majority in the House of Representatives. And while many factors contributed to Republicans’ dominance, a new report from the New York Times suggests that it’s the Republican Party’s establishment wing — and its obsession with fielding more media-savvy candidates — that Democrats should look to if they’re searching for someone to blame.

To be clear, GOP leadership at the national level, especially in the Senate, did a damn fine job of avoiding most of the mistakes made during the last two federal elections. Future Senate majority leader and longtime top GOP strategist Mitch McConnell deserves all the right-wing hosannahs coming his way. But as the media continues to sing McConnell’s praises, let’s hope that it does so with a clear understanding of how and why he succeeded. Contrary to what we’re no doubt going to hear from some fuzzy-headed pundits, it wasn’t because he helped establishment-friendly moderates defeat Tea Party radicals in the primaries. It was because he sidestepped the GOP civil war entirely, focusing on style over substance and making sure every GOP nominee was marketable and media savvy.

Simply put, the establishment and McConnell didn’t bother themselves with the question of moderates versus radicals. They just tried to make sure no GOPer would pull a Todd Akin, and that all the party’s candidates would at least look and sound like they knew what they were doing. Ideology wasn’t really a factor. So rather than try to fold what happened on Tuesday into the broader GOP civil war narrative, think of what McConnell and friends accomplished as more like an electoral version of President Obama’s foreign policy; the Republicans won by running a “don’t do stupid shit” campaign.

Take a look at the story of Chris McDaniel to get a sense of what I mean. The Times report devotes a lot of attention to the way GOP leadership handled the ultra-reactionary Mississippi state senator’s primary campaign, noting that it marshaled resources in favor of his opponent, Sen. Thad Cochran, once Republicans started worrying about how media coverage of McDaniel’s past statements might hurt candidates in other states. After a real all-time shit show, McDaniel ultimately lost, which the Times describes as “a turning point” in the GOP leadership’s effort to “purge the party of extremists.” But if you take a look at what actually separated McDaniel and Cochran, you’ll see the answer was all about tribal identity and style. Because, on policy, the two men were basically indistinguishable.

Besides, the McDaniel dynamic — in which a fire-breathing true believer mounts, and loses, a primary campaign — wasn’t actually that common this cycle. Most of the establishment’s victories were not that obvious, because most of the battles were over long before the GOP faithful were able to cast a vote. As the Times piece makes clear, the conflict, more often than not, wasn’t over who the candidate would be, but rather how they’d present themselves and what they would say. Iowa’s Joni Ernst, for example, is just as extreme as McDaniel, flirting as she does with conspiracy theories and anti-choice absolutism. But the difference between McDaniel and Ernst is that while the former was the kind of conservative who let his wingnut flag fly, the latter was comfortable answering questions about her beliefs by responding, essentially, that she’d rather not say. Same thing goes for Colorado’s Cory Gardner, who’s currently getting a standing ovation from the political press for being so good at saying so little.

Anyone familiar with Mitch McConnell’s career is unlikely to be surprised to see him prospering by kicking ideology to the curb and concentrating entirely on winning the game. And truth be told, many rank-and-file members of the conservative movement, despite being ebullient over the GOP’s victories, know that the 2014 results didn’t say much about the outcome of the Republican Party’s internal struggles. Once the honeymoon is over and it’s time to actually hold some votes, the GOP’s civil war is quite likely to continue. None of this means the success McConnell and the establishment had on Tuesday is any less impressive from a purely political standpoint, of course. But let’s not pretend it represents anything more than GOP candidates finding a way — for at least one campaign cycle — to not do stupid shit.