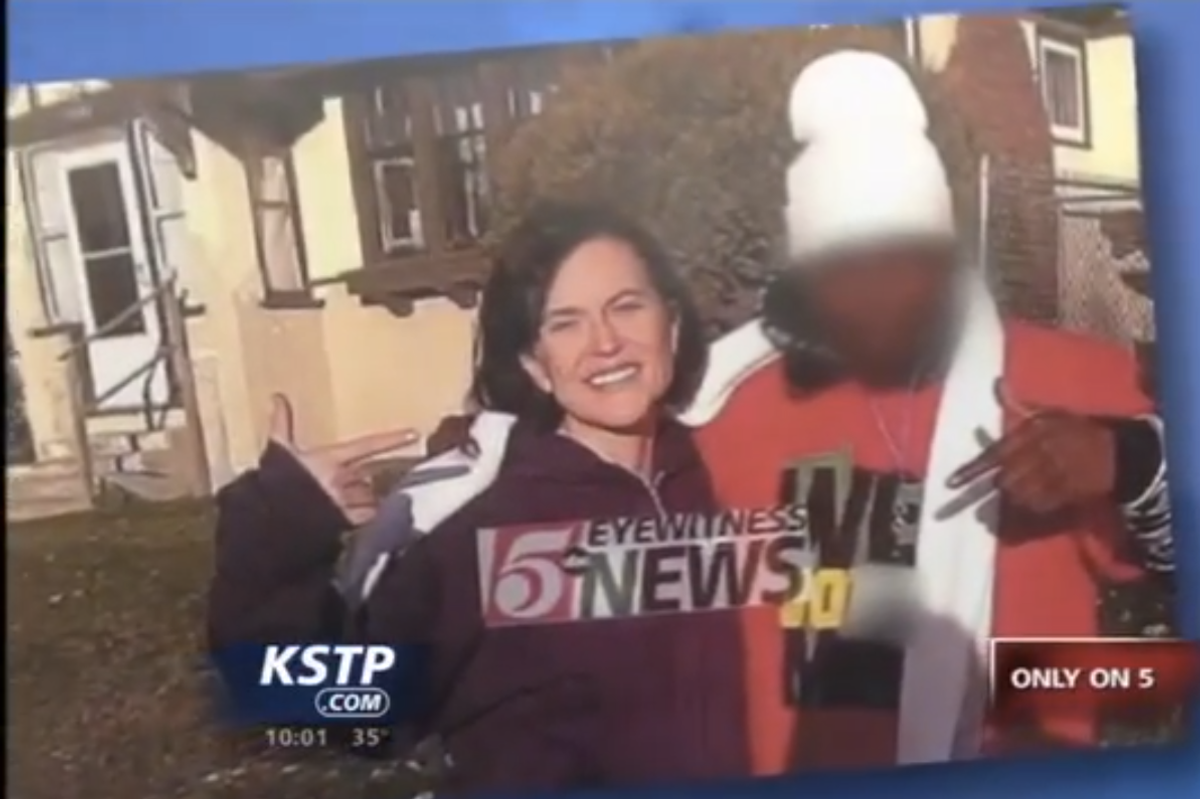 A local Minneapolis television station recently published a photo of the city's mayor Betsy Hodges posing with  Navell Gordon (who is black) at a charity event. In the photo, the two are seen pointing at each other. ABC 5 chose to frame the story with the headline, "Mpls. Mayor Flashes Gang Sign with Convicted Felon; Law Enforcement Outraged."

This is bullshit. Gordon is a volunteer with the respected charity Neighborhoods Organizing for Change. While he has had a criminal past, he is actively engaging in civil rehabilitation. "I made some mistakes in life," he says in the video below. "I can't vote, I'm not ashamed to say that. I'm working on fixing that right now so I can be able to vote for my next president, do you understand?" The moment of the photo is captured in the charity's video, where it is clear that Hodges and Gordon shared an awkward moment as they figured out how to pose together (see 0:32 mark):

Jay Kolls, a reporter from KSTP, chose to share the story this way:

KSTP reporter Jay Kolls has defended the station's interpretation of the photo, suggesting the point is actually a symbol of a local gang called the Stick Up Boys.

This isn't the first time Gordon has been targeted while spreading the word to vote. The Minneapolis Star-Tribune reported in September that while collecting signatures for a petition to restore felons' voting rights, Gordon was tackled and handcuffed after a brief exchange with an officer, who then threatened to shoot witnesses who were protesting the incident.

The Minneapolis Police Department has been under scrutiny for a number of high profile incidents, as well as a recent American Civil Liberties Union report that found blacks in the city are far more likely to be arrested for minor crimes than whites.

Nekima Levy-Pounds, the director of the civil rights legal clinic Community Justice Project, wrote an op-ed in response to the incident in which she defends Gordon and condemns the media: "Rather than celebrating the young man's involvement in civic engagement, the media decided to replay an age-old narrative of stereotyping a young black man from the inner city and branding him as a gang member. Because of the Mayor's willingness to reach into the community and build connections, she too, was labeled in a similar manner and accused of having gang affiliations," she wrote.

At least the Internet has taken it upon itself to ridicule the incident: #Pointergate points out that some of our most beloved public figures are also gang members.