Mark Udall's perfect farewell: How he can go out in a blaze of glory 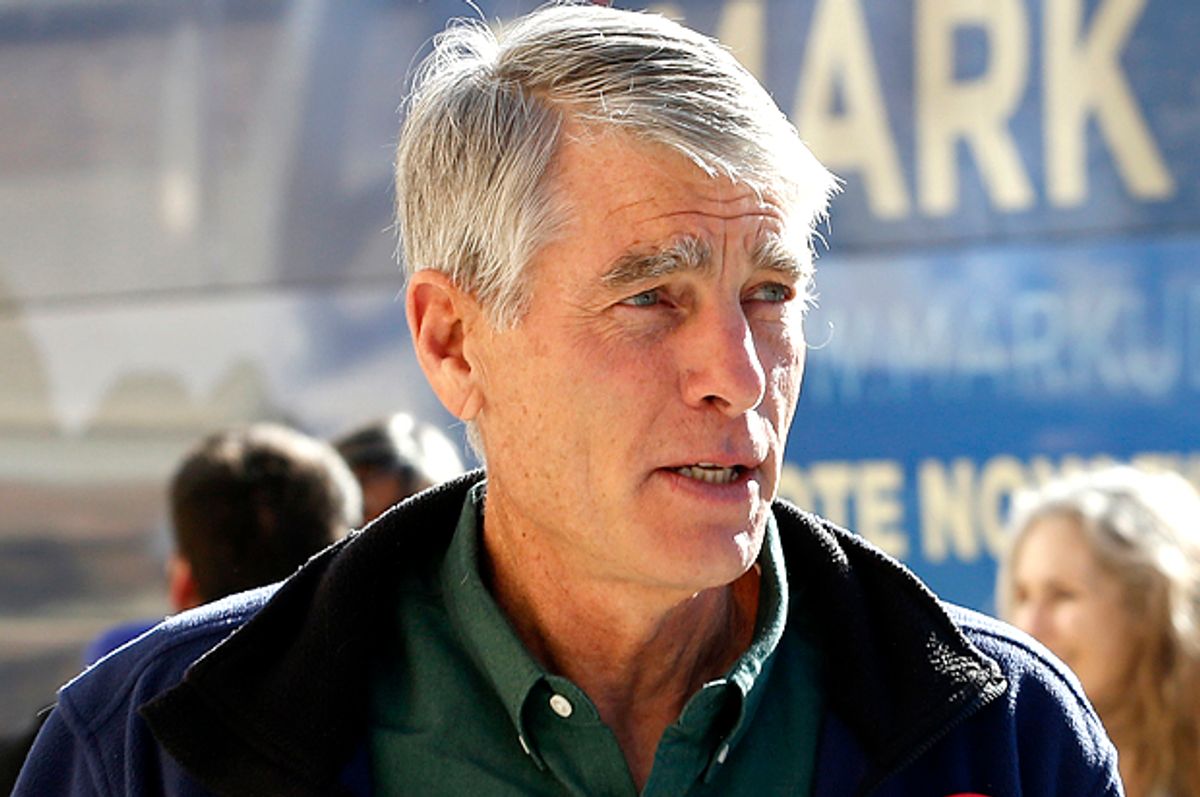 There are people trying to make the case that Colorado Senator Mark Udall lost his seat because of his civil libertarian policies. Even staunch liberals like Mother Jones' David Corn suggested on election night that his anti-NSA surveillance position may have been a problem for him (or at least, failed to help him.)

Most observers do not think it was a salient issue in his race, particularly since his opponent, Cory Gardner, was also on record as being against mass NSA surveillance. But Gardner has been less outspoken over torture, even suggesting at one point that the U.S. Senate was "politicizing" torture to help Mark Udall keep his seat. But since neither surveillance or torture were big issues in this campaign it's a mistake to assume that it had any bearing on the outcome one way or the other. Nonetheless, Corn's not entirely wrong to ask the question and the answer is that it almost never helps a politician to take a position against the intelligence or defense community.Yes, civil libertarians and Rand Paul acolytes will cheer but very few others will care. And many people, including most of the political establishment will be actively hostile.

In fact, the graveyard of promising political careers is littered with the corpses of ambitious politicians who foolishly took on the intelligence establishment and went down to defeat. The most famous of these are two highly regarded Democrats who led the charge against intelligence agency abuses back in the 1970s, Senator Frank Church from Idaho and Congressman Otis Pike of New York.

Church was a well-known national politician with presidential ambitions who launch what became known as the Church Committee investigations after Seymour Hersh published as scathing expose of unconstitutional spying on dissidents in the New York Times. Those hearings even led to the revelation that the NSA had spied on Senator Church himself with what they called "Project Minaret". The investigations resulted in the creation of the FISA court and formal oversight by the congress for the first time. He famously went on Meet the Press and said:

In the need to develop a capacity to know what potential enemies are doing, the United States government has perfected a technological capability that enables us to monitor the messages that go through the air. Now, that is necessary and important to the United States as we look abroad at enemies or potential enemies. We must know, at the same time, that capability at any time could be turned around on the American people, and no American would have any privacy left such is the capability to monitor everything—telephone conversations, telegrams, it doesn't matter. There would be no place to hide.

If this government ever became a tyrant, if a dictator ever took charge in this country, the technological capacity that the intelligence community has given the government could enable it to impose total tyranny, and there would be no way to fight back because the most careful effort to combine together in resistance to the government, no matter how privately it was done, is within the reach of the government to know. Such is the capability of this technology.

I don’t want to see this country ever go across the bridge. I know the capacity that is there to make tyranny total in America, and we must see to it that this agency and all agencies that possess this technology operate within the law and under proper supervision so that we never cross over that abyss. That is the abyss from which there is no return.

Frank Church was not rewarded for his civil liberties zeal. He was narrowly defeated in 1980, ostensibly because of his support for the Panama Canal Treaty but it's no surprise that he was stalked by a big money Republican Group that evoked his claim to fame by calling itself the "Anybody but Church Committee". He was the last Democrat elected to the Senate in the state of Idaho.

And what of Congressman Otis Pike, whose story is even more depressing? Pike led the House Select Committee on Intelligence which investigated many of the same abuses and when it came time to issue the report, the full House voted to keep it under wraps. Eventually it was leaked to journalist Daniel Schorr who published parts of it in the Village Voice and ended up losing his job at CBS over it. Pike retired from congress in 1978 and died in obscurity just last year.

And most people probably know former Senator Mike Gravel from his quixotic fringe candidacy for president back in 2008. But his main accomplishment in politics was the role he played in the release of the Pentagon Papers. Daniel Ellsberg had tried for many months to persuade a Senator to take the documents and read them from the floor of the Senate on the grounds that the Speech or Debate Clause of the Constitution would give congressional members immunity from prosecution. They all turned him down and he finally went to the New York Times. The government filed suit against the paper and during the short period in which it made it's way to the Supreme Court, Ellsberg sought a back-up plan and went back to the Senate to ask Gravel, an harsh critic of the Vietnam war, to do it and he agreed.

Gravel attempted to read the papers into the record but was thwarted when he couldn't get a quorum and the Senate adjourned. Undaunted, Gravel convened a meeting of a committee which he chaired using some bogus pretext and continued reading until aftermidnight when he broke down in tears saying he couldn't continue. But he ended his dramatic moment in the sun by calling for unanimous consent (which he got since he was the only member of the committee present) to put all 4100 pages of the Pentagon Papers in the congressional record of his committee. The next day the Supreme Court ruled in favor of the New York Times and the rest is history. Gravel remained in the Senate until 1980 when he was ousted in a primary.

So what does this have to do with Mark Udall? Well, he currently sits on the Senate Intelligence Committee which is wrangling with the White House over its report on the CIA torture program. They have gone back and forth for many, many months dealing with slow walking on many fronts including lately a disagreement over a White House insistence on redacting pseudonyms. (That's right --- the White House says they even have to redact the pseudonyms of CIA operatives in this report.) The Republicans on the committee have already voted against release of the report and there's little reason to believe they will change their minds once the majority changes hands in January. Indeed, under the new likely Chairmanship of far right Senator Richard Burr, the whole 6,000 page report is likely to go the way of the Pike Report and will be sealed entirely.This would make the CIA very happy indeed.

In this piece at the Huffington Post Ali Watkins expresses optimism that Dianne Feinstein will release the Executive Summary before the Republicans take over and perhaps she will. While she's generally supportive of the Intelligence Community she has been highly critical of the torture regime. But it looks as though the full report is going to be deep sixed unless someone leaks it to the press --- or a Senator does what Gravel did and reads it into the record.

Trevor Timm made an explicit plea to Senator Udall in this piece in the Guardian:

Senator Udall, if it’s still your belief “that the declassification of the Committee Study is of paramount importance and that decisions about what should or should not be declassified regarding this issue should not be delegated to the CIA”, you only have one option left: read the CIA torture report into the Congressional record and bring transparency to one of America’s darkest hours once and for all – before it’s too late.

While it's true that Frank Church and Otis Pike and Mike Gravel were not rewarded for their patriotism in their time, there is little doubt that they will be remembered in history for being brave enough to take on the powerful Intelligence and Defense communities when they had the chance and at least help the country to hit the pause button on their worst predations. It's a rare and inspiring thing to see.

We're talking about torture this time. Whatever Senator Udall's future plans might be, it's fair to assume that knowing what he knows about what happened in that dark period of time, he will sleep better at night knowing that he did the right thing here.