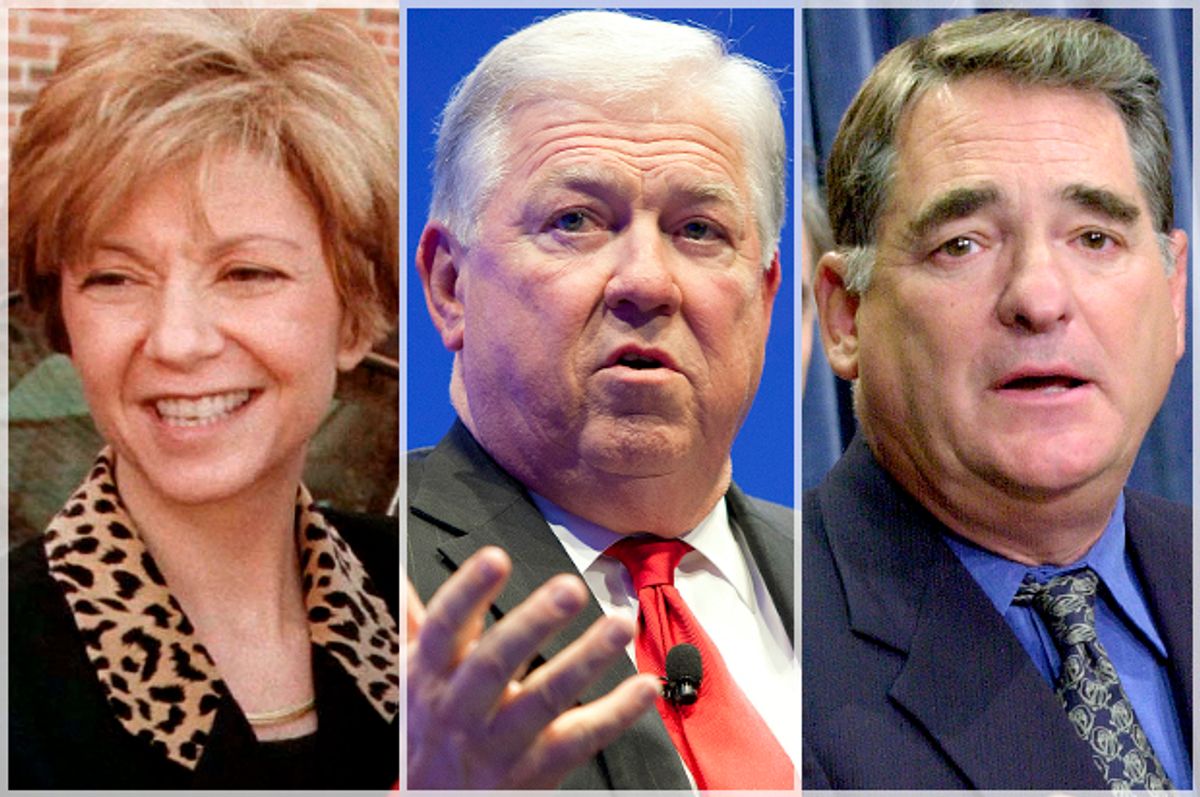 The saddest people in Washington during the past two years of unrelenting legislative gridlock ply their trade on K Street. When there’s no hope of passing laws, there’s no reason to hire expensive lobbyists to push for them. According to the Center for Responsive Politics, lobbyist spending fell 12.5 percent in 2013, and is on target to decrease even more this year.

Some have speculated that lobbying has just gone underground into less-regulated spheres, funneled through nonprofits and “astroturf” organizations. But if that were the case, K Street firms, mired in a three-year slump, wouldn’t be so enthralled by the imminent transfer of Senate power to the GOP. “We’re very excited,” said one Republican lobbyist. “There’s going to be more activity … Corporations and trade associations affected by Washington power will be looking to invest in those policy decisions.”

Lobby shops understand that pretty much all the major legislation emerging from any partnership between President Obama and the GOP will address the concerns of big business. Look at any to-do list and you’ll notice the pattern: trade deals, tax reform, construction of the Keystone XL pipeline, government appropriations (in particular, increasing funding for defense), etc. It’s party time on K Street again.

Even if some of these efforts fail, the very opportunity, the movement of the legislative machinery, means that lobbying firms can advise their clients to pay them more, to ensure that whatever happens fulfills their personal interests. And business leaders, hopeful for a return on their investment in Republican campaigns, will happily oblige.

The only question for the bill is whether the “research and experimentation” tax credit, as well as tax credits for writing off property purchases, will get extended permanently, or just for two years. My money would be on the short-term option, because the tax extenders bill essentially exists as a lobbying vehicle. With the tax credits temporary, corporations must hire lobbyists every year or so to beg members of Congress to protect their expiring favors. Politicians know this, and can extract campaign contributions or other perks in exchange. It’s a game that everyone in Washington knows how to play.

Similarly, K Street figures to profit handsomely from the debate over so-called free trade agreements, which these days have little to do with trade. I don’t remember any campaign ads about the election delivering a mandate to allow multinational corporations to somersault sovereign laws, but that’s what the Trans-Pacific Partnership would effectively do, and corporate lobbyists will push very hard to facilitate that. In particular, Congress can smooth the way for the TPP by giving the president “fast-track” authority, allowing him to bring pre-negotiated trade agreements up for a vote with limited debate and no amendments. Since the TPP would loosen global regulations for virtually every multinational corporation, expect them to spend bundles of money to advocate for fast-track.

There are other corporate priorities for the new Congress, from overhauling housing finance to gutting the Consumer Financial Protection Bureau to lowering corporate tax rates. But perhaps the most unadulterated gift to big business that we can expect is the repeal of the medical device tax.

Obamacare is funded through several revenue streams, one of them being a 2.3 percent sales tax on medical devices. This raises about $29 billion over the next 10 years, and helps offset the costs of Obamacare’s subsidies for low-income exchange customers and the Medicaid expansion. But it’s a relatively small part of that mix, which makes it a prime candidate to be jettisoned.

There’s no groundswell of grass-roots support for reducing taxes on wheelchairs and pacemakers. The only constituency remotely interested is the medical device industry. They’ve spent around $30 million a year, every year, since 2008, to urge repeal. Three hundred and eighty-two lobbyists have worked on the issue this year, including former senators like Trent Lott and Evan Bayh. These efforts already succeeded during the healthcare debate in cutting the medical device tax in half. Now they want to finish the job.

Medical device companies happen to be spread around the country, the better to build maximum congressional support. The industry, famously bipartisan in its campaign contributions, concentrated its donations on Republicans by a 58-42 count this cycle.

However, Democrats have a stake in the industry as well. Blue states like Minnesota, California, Massachusetts and New York are major medical supply hubs. That’s why liberal lawmakers like Al Franken, Amy Klobuchar, Kirsten Gillibrand and even Elizabeth Warren support repealing the tax. They have bought the argument that taxing the industry will stifle innovation and reduce jobs in their communities, a contention “based on misinformation and exaggeration,” according to the Center on Budget and Policy Priorities.

Keep in mind that medical device companies, like all healthcare providers, benefit from the expansion in coverage for up to 25 million Americans. One of the bargains of the law was that providers would chip in to pay for expansion, while making out far better on the other side. Indeed, revenues are growing for the medical device industry, despite the tax. But they want to keep all the new profits for themselves.

Incredibly, one of the nation’s biggest medical device makers, Medtronic, is the same company that renounced its corporate citizenship this summer, through an “inversion” deal with competitor Covidien, which will move its headquarters to Ireland. Even after the Treasury Department’s attempted crackdown on inversions, Medtronic will go forward with it, altering some of the financing for the deal. So Medtronic unveils a scheme to avoid U.S. taxes, and Congress is poised to reward the company by cutting taxes on its products even further. Shares in major medical device companies rose after the elections, so everyone recognizes the moment of possibility here.

President Obama is reportedly relieved for a possible avenue to make deals with Republicans, bypass gridlock and “get things done.” But nobody’s more relieved by the election outcome than K Street. They’re probably already counting the money that’s about to roll in.