Apparently there is only one right way to salute our nation's veterans, and its name is Carrie Underwood 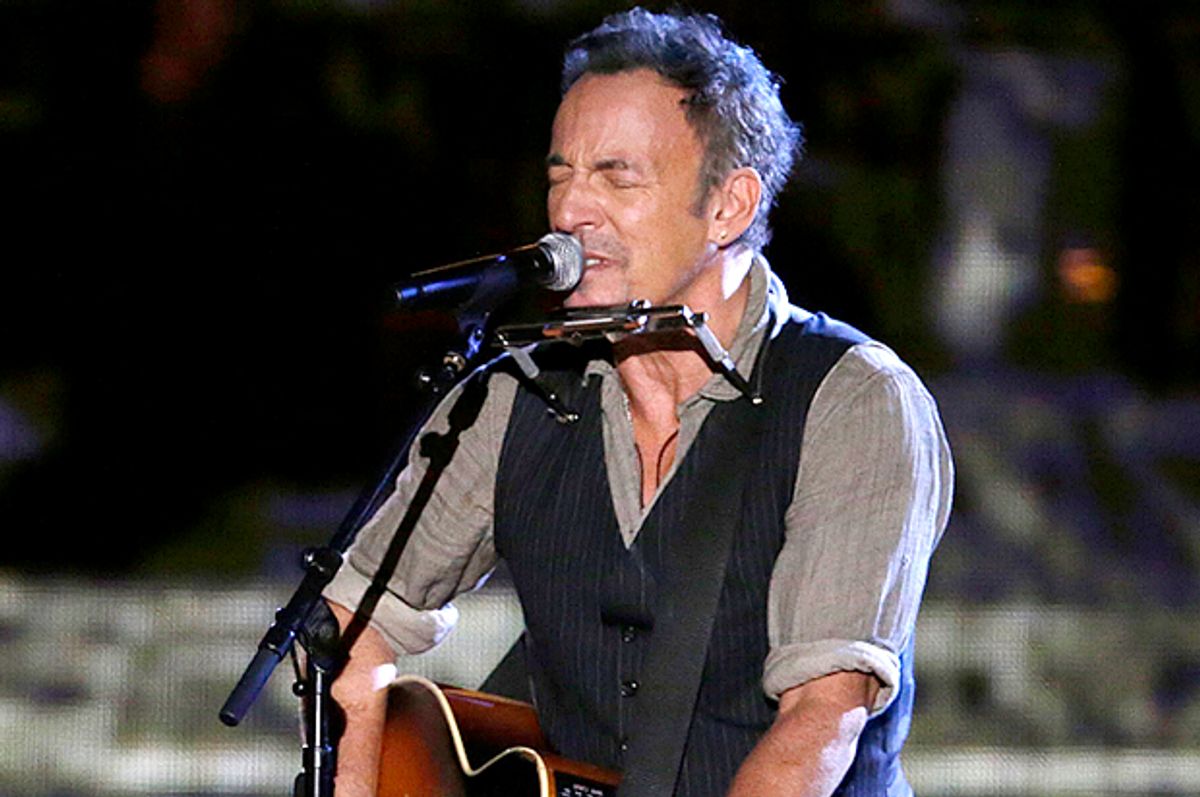 Viewers unfamiliar with Bruce Springsteen might be forgiven for thinking they heard booing at last night’s Concert for Valor, held yesterday on the Mall in Washington, D.C., and broadcast by HBO. Fans have a specific way of calling his name (“Bruuuuuuuuuuce”) that sounds a little like protest (and a bit like the gentle lowing of cows). But Fox News and other conservatives did call him out this morning for performing a cover of Creedence Clearwater Revival’s “Fortunate Son” on the Concert for Valor stage with Dave Grohl and Zac Brown, calling the song anti-military and a poor choice for Veterans Day. Apparently there is one right way to salute our nation's veterans in these politically polarized times, and it's with Carrie Underwood singing "Before He Cheats."

Instead of "what was Springsteen thinking?" the better question might be what exactly did the concert producers expect from an outspoken critic of violence and income inequality like Springsteen? A Toby Keith cover? Do they subscribe to the Chris Christie version of Bruce fandom, where his main concerns are fast cars and sad women?

It wouldn’t be the first time the right has willfully gotten rock music wrong, but the insistence that John Fogerty’s Vietnam anthem is explicitly anti-American, and therefore unfit for a Veterans Day concert, just shows how narrow the scope of patriotism must be these days. In the song, Fogerty uses state symbols like “the red, white and blue” and “Hail to the Chief” metonymously as stand-ins for powerful government. His song unmistakably states that some young people are born into families with power and influence, which gives them the choice to go to war or not, while the progeny of the working class generally have fewer options — enlist, be drafted or break the law. It’s not unpatriotic to point out the truth: Having a senator for a parent (or a four-star general, for that matter) gives a kid options in this country that a grocery clerk’s kid might not have.

It's possible that as a country, we'd  like to forget that there are vets who enlisted for practical reasons rather than enthusiasm, but Veterans' Day is for them, too. The draft might not be active now, but young Americans still join the military for access to hard-to-come-by educational benefits and paid work experience — not to mention a potential pathway to U.S. citizenship — that are more readily available through other means to well-connected youth than working-class kids. That doesn’t mean affluent youth don’t join the military (especially ROTC and elite training grounds like West Point), but how many Army recruitment centers do you see in tony neighborhoods?

Protest is still part of the whole freedom package (ask those original Tea Partyers!) and so is just as patriotic as flag-waving, but if you're looking for an explicitly antiwar song, this isn't it. “Fortunate Son” honors the experience of those veterans who wouldn't have enlisted if they hadn't been drafted, but did. It also salutes those who took the best option available to them to access the ever-elusive American Dream and served with dignity and honor, while also raising an eyebrow at tax loopholes and other ways the rich stay in power and the working class get screwed. It doesn’t even come close to the simmering discontent of “Born in the U.S.A.,” which Springsteen also played last night, a song about a poor kid takes deployment to Vietnam over jail time and comes home traumatized to closed doors and crumbled opportunities. True, it's not pro-war, either. If anything, the stark ambivalence of “Fortunate Son,” the flat acceptance of how un-level the playing field can be, is likely what is most threatening to power. Blatant agitation and protest can be discredited. An emotionally truthful ambiguity is much harder to suppress.