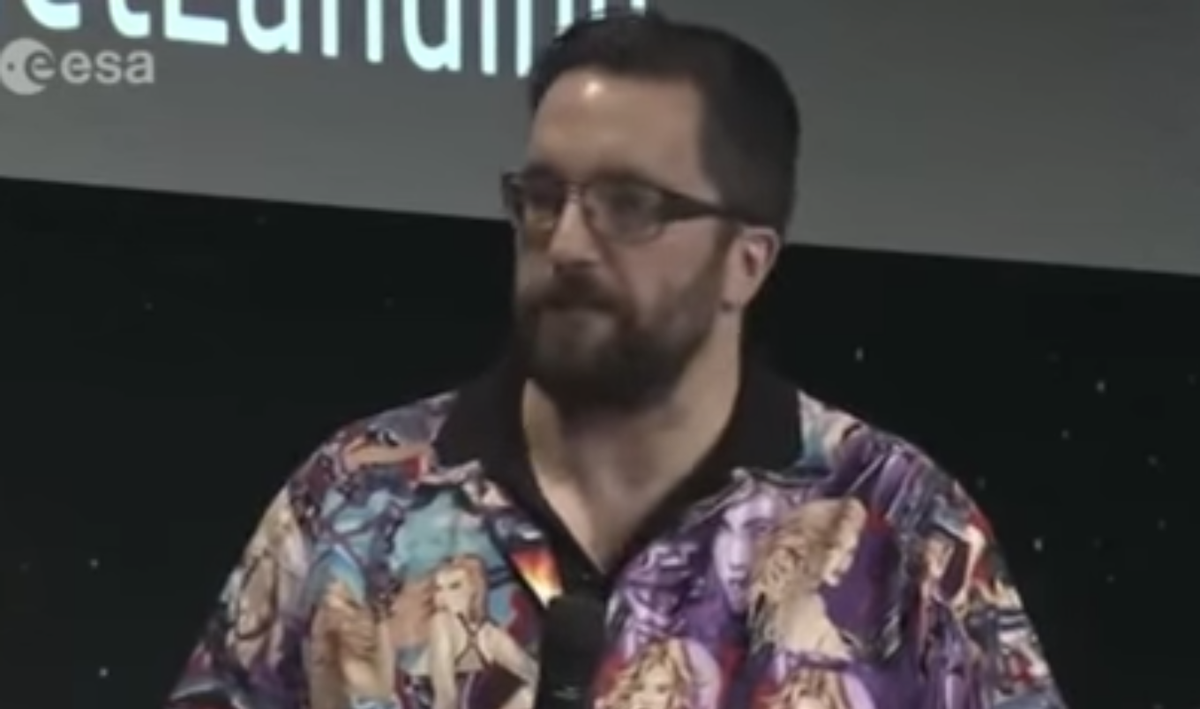 Dr. Matt Taylor, one of European Space Agency scientists responsible for landing a spacecraft, on the surface of a comet, offered a tearful apology today for his tasteless choice in button-downs. On a streamed Google Hangout, hosted by the ESA, Dr. Taylor said he was "very sorry" and called wearing the shirt "a big mistake."

In a post Philae landing-interview, Dr. Taylor was wearing a Hawaiian-style shirt covered with scantily clad women. Many picked up on this outfit choice, and were understandably outraged. A deluge of tweets and responses spilled onto the Internet. (In an aside there was the not shocking discovery that women who tweeted displeasure with the shirt were attacked, and men who tweeted criticism of the shirt were not.)

The shirt itself is pretty tasteless. The women on it are another reinforcement of our icky societal standard of beauty; the women are celebrated for their sex appeal. And the fact that Taylor thought that this was appropriate could point to the fact that he doesn't work with enough women, or that he lacks the judgement to see how this could be offensive. Both are serious and issues.

Young girls are discouraged from the sciences (myself included, but that is a different story). There is also a huge terrible dearth of women in STEM fields, and when women are in those fields they must often contend with harassment, sexism and unequal pay. Because even if a woman does make it through the pipeline into STEM, they are not treated properly.

The shirt was more than just nearly naked women.

However, I think there is a bigger problem. I'll admit I don't know the full gender breakdown of every scientist who worked on the Rosetta mission (and I searched for a list). However, watching the livestream of the Philae landing, during the victory speeches I saw microphone passed from man, to man, to man, and a female master of ceremonies (who had to call someone out for flirting). And on the Google Hangout, where Taylor made his apology, there were two women: one was the moderator, and one lone female scientist. That is a problem.

It is a problem that on this historic day -- a day that reminded humanity the importance of exploration, a day when science dominated Twitter more than a celebrity -- little girls around the world saw very few women, and the women they did see were moderators, in the background, or scantily clad and on a man's shirt.

I am heartened by Dr. Matt Taylor's apology and visual contrition. It was refreshing to see somebody take this criticism seriously and offer sincere remorse. But the shirt is just a symptom of something much more entrenched and upsetting, and that's what we should all be outraged about.