Law enforcement's core failing: Why the solution is much more than indicting Darren Wilson

If Mike Brown's killer gets indicted, it'd be a pleasant surprise. But here's why there's so much more to the story 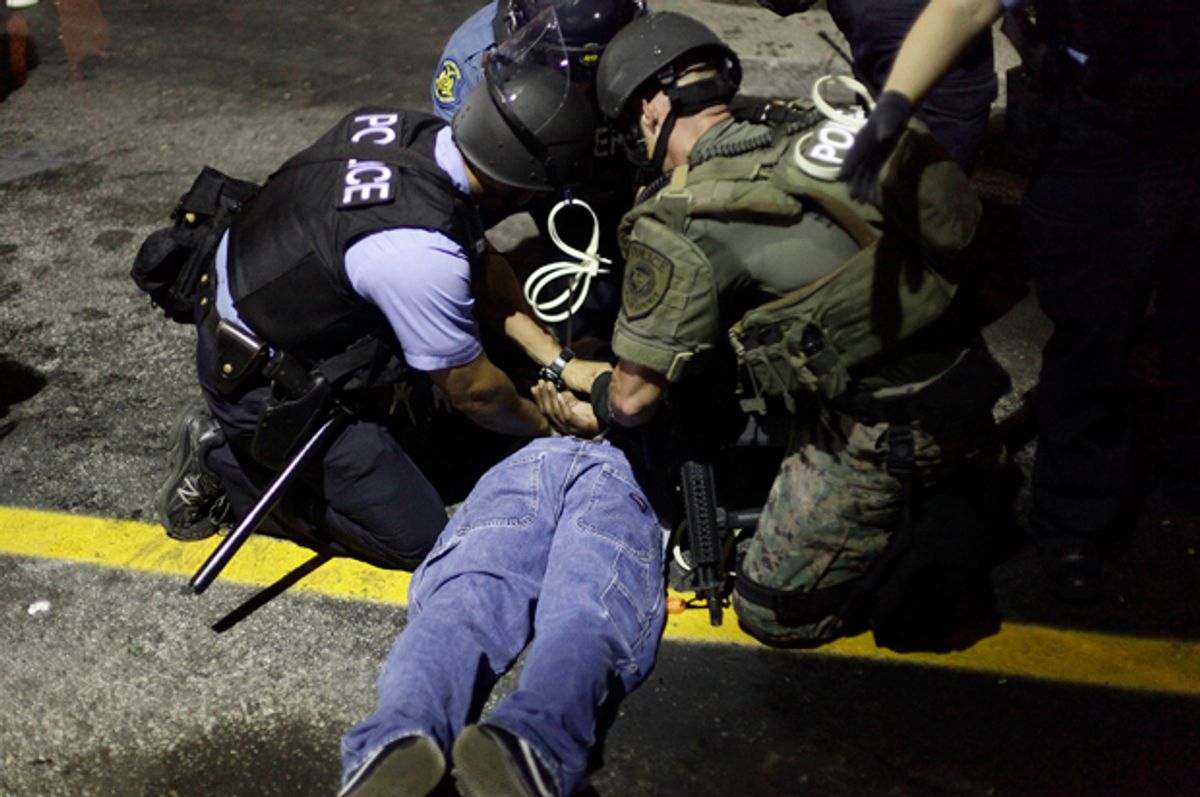 “Indict. Convict. Send the killer cop to jail. The whole damn system is guilty as hell.” That’s the chant that stuck in my head after going to the Ferguson October protests last month in support of justice for Mike Brown.

I remember marching and saying similar chants for Oscar Grant. Four years ago, Nov. 5, 2010, Officer Johannes Mehserle was sentenced to two years for fatally shooting Oscar Grant in the back as he lay face down on a train platform in Oakland.

Protesters in Ferguson and across the country have been calling for Officer Darren Wilson to be indicted and brought to trial for the killing of Mike Brown. They expect that Wilson will be convicted of a criminal act, perhaps murder or at least a lesser charge like manslaughter, and then sent to prison.

Recent leaks suggest that the grand jury will make an announcement shortly, and that an indictment is not coming for Darren Wilson. But even if he is indicted, where does that leave us?

After Grant’s death, there were also protests, and similar demands were made. Mehserle was tried, convicted and found guilty. He served 11 months of his two-year sentence for killing Oscar Grant. Those calling for justice were left disappointed by his inadequate sentence. Most unsatisfying about the outcome was that it did little to address the systemic nature of police killings of black people in this country.

The Operation Ghetto Storm report released in 2012 found that every 28 hours, someone employed by or protected by the U.S. government kills a black person. ProPublica’s analysis of killings by police shows that in recent years, young black males were at a risk of being shot dead by police 21 times greater than their white counterparts.

Justice for Mike Brown must mean addressing the systemic support for Darren Wilsons across the country, in government and in communities.

That other police officers in Ferguson wore bands saying “I am Darren Wilson” and mostly white community members rallied to his defense demonstrates that we have not come to terms with this country’s long history of racialized violence, which still persists.

Because if we had, regardless of what ensued between Darren Wilson and Mike Brown before his death, the nation would see the significance of law enforcement leaving the body of a dead black teen for four and a half hours in the middle of the street in a low-income black neighborhood.  The nation would recall Emmett Till and the thousands of other black people killed, their bodies made spectacle.

But there is no collective memory, nor even markers of these past racialized killings.

In 2005, Congress finally apologized for never passing an anti-lynching bill. But more than apologies, black people need lawmakers to demonstrate a commitment to acknowledging the past and addressing its continuity in the present.

The Equal Justice Initiative in Montgomery, Alabama, has pushed for historical markers at the sites where black people were lynched across the country. Redirecting federal funding from the militarization of police toward such a program would be a small step in the right direction.

People of color are under siege in this country, and for that to change, the U.S. government must ask for help. In April 2015, when the United States has its Universal Periodic Review in front of the United Nations Human Rights Commission, it should ask for an externally monitored truth and reconciliation commission to address the history and current manifestations of racialized violence in this country and its impact on human rights inside the United States.

The United States is touted as the land of the free, but when it comes to both civil and political rights and economic and social rights, we are failing. We incarcerate more people per capita than any other nation, and our poverty rate is among the highest of similarly situated industrialized countries. These phenomena are related. Researchers estimate that some 5 million people have been pushed below the poverty line because of mass incarceration.

A truth and reconciliation committee would remind our government that we are not beyond the bounds of international law, and would show that accountability does not have to be synonymous with punishment. To move forward, we need to realize that our economy of punishment has failed. Over-criminalization has marginalized low-income communities and communities of color, while more and more resources are given to those with the power to punish.

Darren Wilson may be indicted, or he may not. He may go to prison for years, or he may go free. Regardless, for justice to be served, the balance of power must finally shift.

Zachary Norris is the Executive Director of the Ella Baker Center for Human Rights.