"An ongoing criminal enterprise": Why America's housing disaster is back and wreaking terror

Remember the housing nightmare that busted the economy? The crooks are back and here's what they're secretly up to 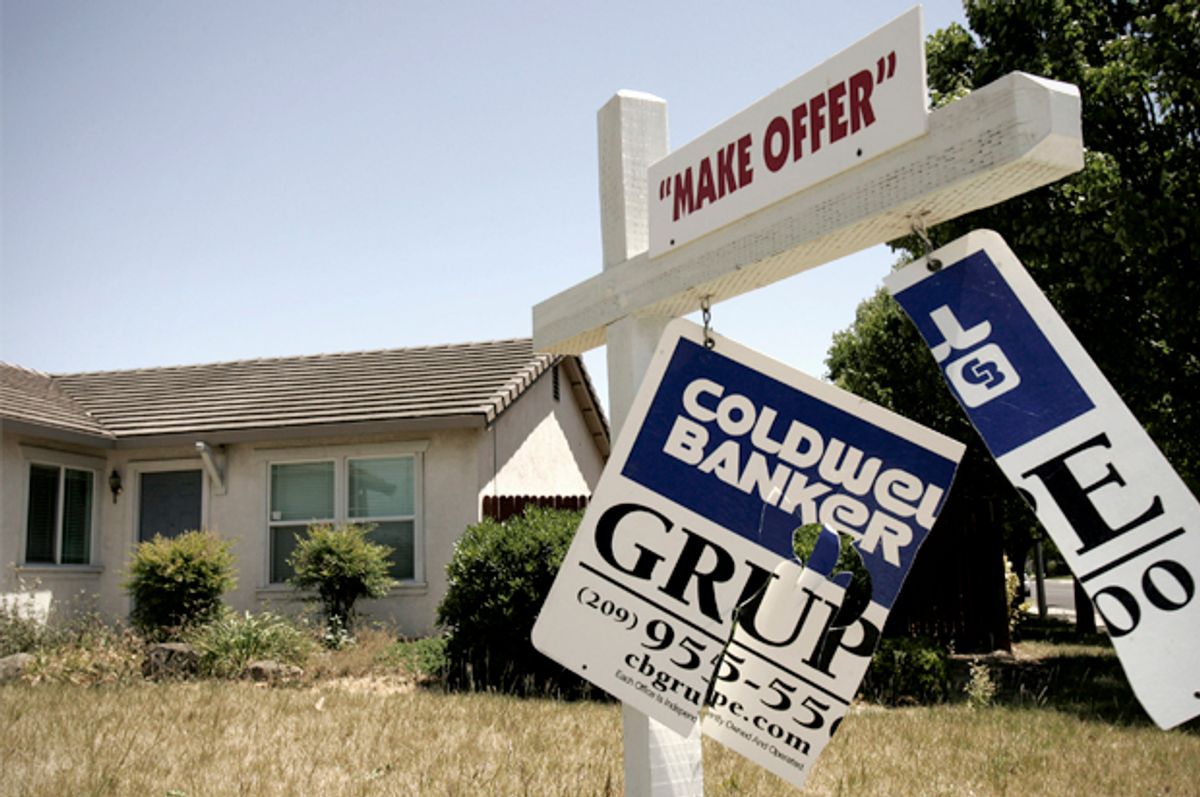 According to housing analyst RealtyTrac, foreclosure filings shot up 15 percent last month, the largest increase in over four years. Almost 60,000 homes were newly scheduled for auction in October, a spike far beyond the usual seasonal rush to complete repossessions before the holidays. Auctions rose 53 percent in Nevada, 118 percent in New Jersey and an amazing 399 percent in Oregon.

Continued demand for foreclosed properties by institutional investors and increased sale prices finally make it cost-effective to sell these homes, after persistent delays. “Distressed properties that have been in a holding pattern for years are finally being cleared for landing at the foreclosure auction,” said Daren Blomquist, vice president at RealtyTrac.

If lenders have finally begun to finish their oldest foreclosure cases, you might assume that they have moved past their problems with processing foreclosures. After all, for years, mortgage servicing companies, who file foreclosures on behalf of the owners of the loans, presented millions of false documents to courts. They also engaged in “robo-signing,” where employees signed affidavits attesting to the validity of foreclosure actions, despite having no knowledge about the underlying cases. The five leading servicers agreed to a $25 billion settlement over these problems, vowing to reform their ways.

But you would be wrong to assume that anything has changed in our foreclosure courts.

New evidence over the last month shows that servicers employ virtually the same improper techniques when foreclosing. Instead of robo-signers, they use robo-witnesses, or robo-verifiers; more on them in a moment. Regardless, they are breaking laws and degrading the integrity of the courts to kick people out of their homes, a sad and enduring legacy of the destruction of the nation’s property system during the housing bubble years.

In 22 U.S. states, lenders must file foreclosure complaints with a court, and prove the facts of the case before a judge. But servicers have shown themselves largely unable to perform this seemingly simple task.

During the housing bubble, mortgages were traded so rapidly, with insufficient documentation, that true ownership has been confused on millions of loans. In addition, servicers operate with such thin profit margins and bare-bones staff that they don’t have the resources to retrace the steps of the mortgages, which may have gone through eight different companies or more. So they have resorted to a number of shortcuts to evict homeowners.

When servicers got caught robo-signing, they stopped. But they trained a new set of employees, best described as robo-witnesses. These low-level personnel work for the servicer’s litigation departments, and they fly around the country from courtroom to courtroom. Reading from a script, robo-witnesses claim to have personal knowledge of their employer’s practices, and that they can swear to the legitimacy of the foreclosures. “They’re trained to parrot a script, you could just bring a parrot in,” said Lisa Epstein, a foreclosure expert now working for a defense attorney.

But these robo-witnesses know pretty much nothing beyond the script; they have no insight into the individual cases in which they’re testifying. “They walk into court having read the documents of the case a moment before,” said Thomas Ice, a foreclosure defense attorney in Palm Beach, Florida. Ice argues that it’s no different than robo-signing, just moved into the courtroom. “They don’t give their signature now, they just perjure themselves in court.”

This has been a standard technique for several years; I first wrote about it in 2012. But now, defense attorneys have adjusted, cross-examining the robo-witnesses and appealing cases because of this mass perjury. And appeals courts in Florida have begun to agree.

In one case last month, the 1st District Court of Appeals reversed a case featuring robo-witness Andrew Benefield. The court found that Benefield “had no personal information” about the authenticity of the documents he testified about in the case.  In another case, the appeals court ruled that the robo-witness swore to the correct loan balance based only on the review of computer printouts, “and she had no information about how and when those records had been prepared or where the data came from.” Other appeals courts in Florida have ruled similarly, effectively making robo-witnesses a failed tactic.

Servicers have run into another problem in Florida, ground zero for the foreclosure crisis. Because of a series of state Supreme Court rulings after the robo-signing scandal, an employee affiliated with the servicer must sign a document that says, “Under penalty of perjury, I declare that I have read the foregoing, and the facts alleged therein are true and correct to the best of my knowledge and belief.”

Defense lawyer Evan Rosen of Fort Lauderdale, Florida, decided to depose one of the signers of these verification statements: Lona Hunt, foreclosure specialist for Seterus, servicer for the mortgage giant Fannie Mae. In the deposition, Hunt admitted twice that she never read the complaint at all before she signed the document swearing that the facts were correct.

Hunt testified that she only scanned the foreclosure complaint, checking that the defendant’s name and date of default matched what was on a computer screen.  She misidentified key documents in the case, did not know the meaning of basic legal terms in the complaint, and basically showed little expertise about anything related to mortgages and foreclosures. You can read the deposition here.

It’s impossible for someone with such a limited knowledge base about foreclosures to verify that the facts of an individual case are correct. And keep in mind that this verification process exists in Florida because servicers illegally robo-signed official documents and got caught. The courts decided to increase legal consequences by forcing servicers to verify the truthfulness of their claims. Yet they are robo-signing those verifications too.

So why is this important? If the verifiers cannot verify and the witnesses bear no witness to the facts, so what? Didn’t homeowners default on their loans? Why should they get a free pass? This is the familiar refrain of those who would minimize this misconduct. Some even blame the states for forcing the poor servicers to prove they own the homes they want to repossess.

Here’s the truth. False documents and mass perjury, both criminal violations, make a mockery of the judicial system. It means that the servicers have as much legal right to foreclose as I do. To say that the homeowner is guilty of not paying, so their lender can do whatever they want to force them out of the home, is like saying the murder suspect is obviously guilty, so the cops can plant false evidence. We have a system of law to defend the rights of everyone, and ensure equal treatment.

Moreover, as Jim Kowalski, executive director of Jacksonville Area Legal Aid and a longtime foreclosure attorney, told me, “when you have procedural defects in these cases, you will almost always have substantive defects.” Multiple reports and studies verify this. The inspector general for HUD, for example, took a sample of JPMorgan Chase loans and could not find documented proof for the amount owed on 35 out of 36 loans. This gets worse when servicing transfers between several companies; the amount owed becomes subject to a game of telephone, with dollar amounts effectively made up.

That means that the amounts servicers claim borrowers owe have no basis in fact. Multiply that by the tens of millions of outstanding mortgages, and you’re talking about tens if not hundreds of billions in questionable charges, from which nobody is safe. This makes defaults really educated guesses, often driven by the fake fees and incompetence. To compound this, servicers use bogus witnesses and perjured documents to “prove” the defaults are legitimate. The entire system is fraudulent and in need of overhaul.

This is where law enforcement should step in. The Justice Department settled with these same companies over robo-signing, and in the agreements demanded that they never do it again. Well, they’re doing it again; in fact, they never stopped. Bad documents have remained in the system, as Gretchen Morgenson explained over the weekend, being used to continue to punish borrowers. Nobody has rooted out this rot at the heart of our housing market. “It’s happening every day,” lawyer Tom Ice said. “And the world doesn’t care.”

Ninety-five percent of borrowers never show up to defend their foreclosures. Servicers get away with this because they can afford to lose one case if another 20 go through. The only way to fix this crisis on a thorough basis, instead of waiting for one-off judgments in individual cases, is for government officials to enforce the law. Otherwise, literally nobody is safe from the corrupt practices of a mortgage industry acting as an ongoing criminal enterprise.