"We saw a wall-to-wall landscape of pleasure-seeking naked humans": A married couple dishes on the crazy world of swinging

Mark and Christy Kidd had a pretty average marriage, until they accidentally stumbled upon a swingers party 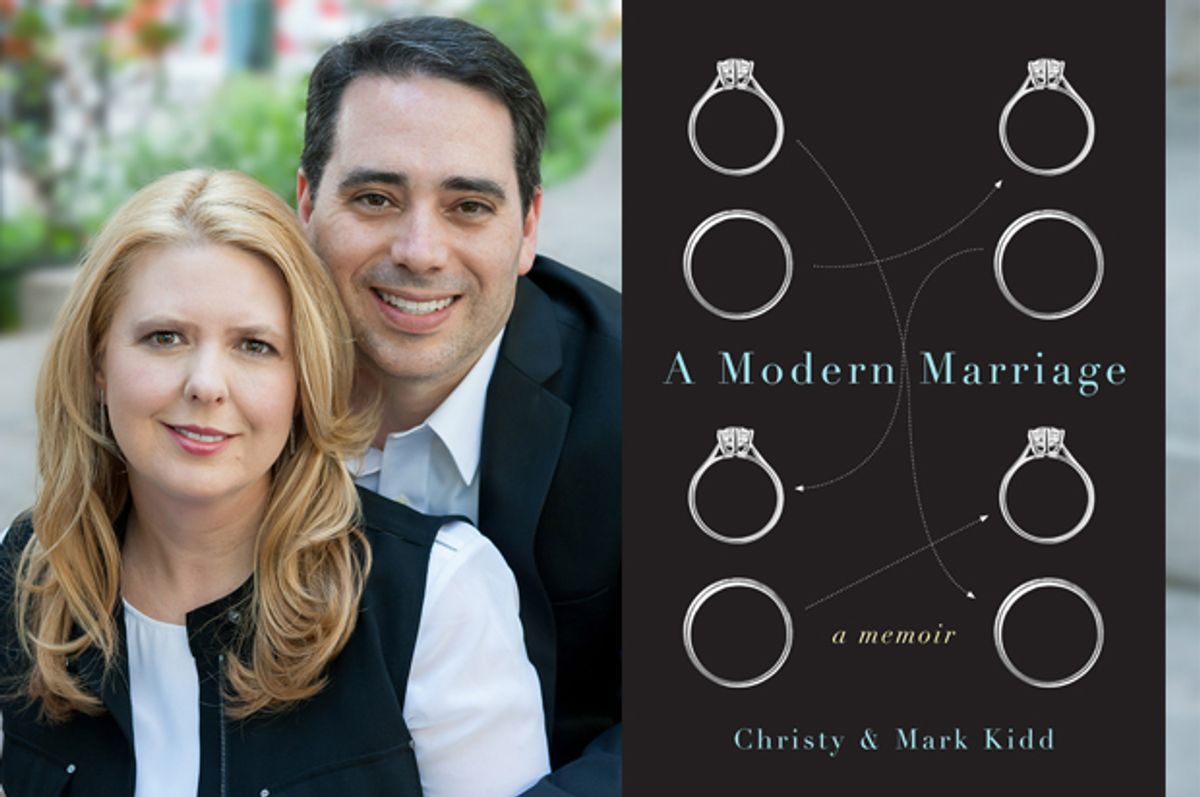 "Swingers." The word brings to mind hot tubs, handlebar mustaches, bowls of keys and the cheesy come-ons of Austin Powers. Put more succinctly: "dorky images from the seventies," as Mark and Christy Kidd put it in their new memoir, "A Modern Marriage."

But all of that associated imagery changed when they accidentally stumbled upon a swingers party one New Year's Eve. "OMG. I mean to tell you: Oh. My. God! Atop the mattresses was a wall-to-wall landscape of pleasure-seeking, pleasure-giving naked human bodies in every conceivable configuration," they write. "A guy on the left was a dead ringer for Brad Pitt -- naked Brad Pitt. A few bodies down, a woman babbling in Italian was like a younger Sophia Loren."

That this existed, even in their home of New York City, came as a shock. "Call us naive, or call us normal, I'm not sure which, but we had never thought about a scene like that one," they write. Once they saw it, they couldn't un-see it -- or  stop talking about it. In fact, the next morning, they were already discussing how they would give swinging a try. "Just by dumb luck we had stumbled across the party that was going to change our lives forever. That evening was the start of an adventure that's evolved and transformed our world for eight years now, with no sign of letting up or slowing down." In fact, they refer to that fateful night as the "Great Awakening."

The Kidds spoke with Salon about how to conquer jealousy, why women usually drive the decision to swing and how the whole scene is actually pretty vanilla.

Tell me about the first time you went to a swinging party — you ended up there somewhat by accident.

Christy: It was a New Year's Eve party; we thought it was actually a regular party, and we just wanted to do something for the holiday. We ended up at this loft in midtown. Everything was normal in the party, people were just walking around and whatnot, and we were almost ready to leave the party when I noticed a curtain with a guard in front of it. Mark had gone to the restroom, and I approached the guard and he wouldn't let me go in without the person I came with. I didn't know what that meant at the time. So as soon as Mark came back, we went up to the curtain and he opened it for us and we saw this crazy, completely opposite of what we were seeing on the outside, it was completely crazy with wall-to-wall people, mattresses on the floor, people were having sex and doing all kinds of crazy things.

Mark: Like Christy was saying, it's definitely not something we expected. We didn't even know this existed. I had no idea people did this kind of thing in public.

You must have heard of swinging before, but you didn't know that it happened in that public way?

How did you feel seeing this?

Mark: It was a powerful experience for me.

Christy: For both of us. It was initial shock, of course, because we didn't expect that to be behind the curtain, and intriguing as well. People were watching, it wasn't just people having sex. It was a totally a turn-on to see this happening before your eyes.

Mark: It was a very powerful experience. We were captivated by it. We had to sit down. We both felt compelled to watch instead of running away. It started the conversation. The conversation the next day was inevitable. We had to explore this.

How did you end up talking about it the next day?

Mark: We first were completely fired up sexually. Because it was so visceral, our reaction to it all, we felt like we had to explore it. I think the conversation was that we couldn't stop thinking about it. And we both felt like we had to figure it out, we had to see what this was all about.

How did you decide to actually try it out?

Mark: We started on the Internet, because that was the most obvious starting place. That led us to meeting all kinds of crazy characters.

Tell me about the first swinging experience you had.

Mark: We toyed with it for almost a year before we were finally successful with it. We met one couple we were trying to get to know and the chemistry seemed good so we met them at a motel and it was just awkward. They brought a bag of sex toys. It just didn't work. So we ended up leaving.

Christy: We didn't know what we were doing and we weren't ready to dive into the notion of swapping. We were still newbies and amateurish, and the couple we met had been in the lifestyle for a while. When we met them at the bar, they seemed normal, the chemistry was there. So then we met up with them at a motel -- a motel motel -- and had dinner in the room. It had a kitchenette.

Mark: The four of us were eating at a dinette under a very bright light. There was lots of forks clinking on the plates.

Christy: It was awkward. We started talking and everything and the girl brings out a roller bag full of sex toys. We weren't prepared for that. We ended up mutually leaving and deciding to meet up again, which was another failed attempt.

Mark: There were a lot of missteps. Some of it was my fault. My jealousies had control over me. I couldn't get past the thought of Christy having sex with someone. I knew I wanted to pursue this, I just couldn't get past it for like a year. Finally after all those couples and experiences, we found the sex club that worked for us.

Why did you decide to push through those feelings of jealousy? It seems like such a challenge.

Mark: We really felt compelled to conquer this whole thing.

Christy: We saw at that first party that people were having fun. It was a very joyful environment and we were like, "Why are we having all of these missteps?" Obviously we weren't to that point yet.

Mark: What was really transitional for us in this learning process was one couple we met that essentially served as our mentor couple. They were really a free-spirited, Brooklyn-cool kind of couple that showed us how to have fun with it and take the personal out of it.

Christy: Not completely. Jealously is a human reaction and feeling. We've learned over time that you separate your feelings and personal live from sex. Sex is sex.

Mark: I would say I've overcome 80 percent of my jealousies. I really have. In my previous relationships in college, jealousy was such an issue for me. Now it's not so much. I have that so much more in check.

How do you overcome jealousy?

Christy: We started on this journey together and have a very open line of communication, we're honest with each other, we talk through things. It's a mutual decision. We do everything together. By having that dialogue and doing this together has made us not as jealous because of the trust and honesty that we have.

Mark: Sex in and of itself is not that big of a deal. In the book we talk about a two-year committed relationship that we ended up developing with another couple. I would get jealous of the relationship that Christy had with Brett and it had nothing to do with sex.

Christy: Not everyone can do that. But we've just learned and kind of separate the two.

Tell me about that committed relationship to another couple.

Basically, we had been doing this for a while. Once when we were visiting Texas, we decided to meet up with an old high school friend-of-a-friend and his wife. There was some chemistry there when we were out one night having drinks and we approached them and they were kind of into the idea, so during that vacation we ended up all getting together. It turned into them coming to New York to visit us; we'd go down to Austin to stay with them and it evolved further as Christy and Brett developed their relationship and Terry and I developed ours.

Christy: We would start doing things on our own as other couples, Brett and myself and Terry and Mark. And as a couple they would come visit us and bring their daughter. Every couple of months we would see each other. It got very intimate very quickly.

Christy: Very much so. Brett and I were very similar in the things that we liked to do. The same was true of Terry and Mark. I guess what Terry wasn't interested in, I was. So it complemented each other's couples. That's where some of the jealousy comes into play. When Mark sees a DVD of me and Brett skydiving he couldn't watch it because it was too much, it was something that Mark wouldn't do but that I always wanted to do. It was very difficult because it was not just sex anymore.

How did that relationship end?

Mark: Sadly, it ended with them getting a divorce. Unbeknownst to us they were having marriage problems in the beginning. They were using this lifestyle to improve their marriage, which is a big-time mistake.

You mention in the book that it's pretty common for people to use swinging as a last-ditch effort to save a marriage. Do you think that ever works?

Mark: I don't think so. I think it would make it worse. If you have a good relationship, it could make it really great. But if there's cracks in it it could really mess it up.

What sort of boundaries do you guys have?

Mark: First and foremost, we don't do it too often. We don't go to sex clubs or house parties more than once a month. We keep it light. Although we like to become intimate one on one with other couples, we don't communicate with them on the side.

Mark: It was good.

Christy: We've never had a problem or had any kind of disinterest in each other. This was just an added element that sparked a different flame. And it made us closer.

Mark: There was never a deficiency, but it made it even better.

What's the biggest misconception that you had about the swinging world?

Christy: It's not any certain class of people.

Mark: That's a big thing. You would think it might be all cool, edgy and good-looking people, but it's normal people. It's not just people tatted up for something like that.

Christy: This lifestyle has what we call a social equalizer. It doesn't matter where you're from, what you do --

Christy: Also, it's interesting to note that women drive this process more than men.

Why do you think?

Christy: A couple reasons. Women want to spice up their sex life and so, of course, if they express interest in it, I don't think a man would say no to it.

Mark: I think men are the more insecure and jealous of the two. It's usually the men that can't handle it.

Christy: The woman will initiate this and the man will totally be on board, but when they get into an actual swinging situation the men are the ones that actually back out.

Christy: One of the other misconceptions we want to dispel: Fetishes are completely different than swinging.

Mark: This world is pretty vanilla. It's pretty standard sex, it's just partners trading with each other.