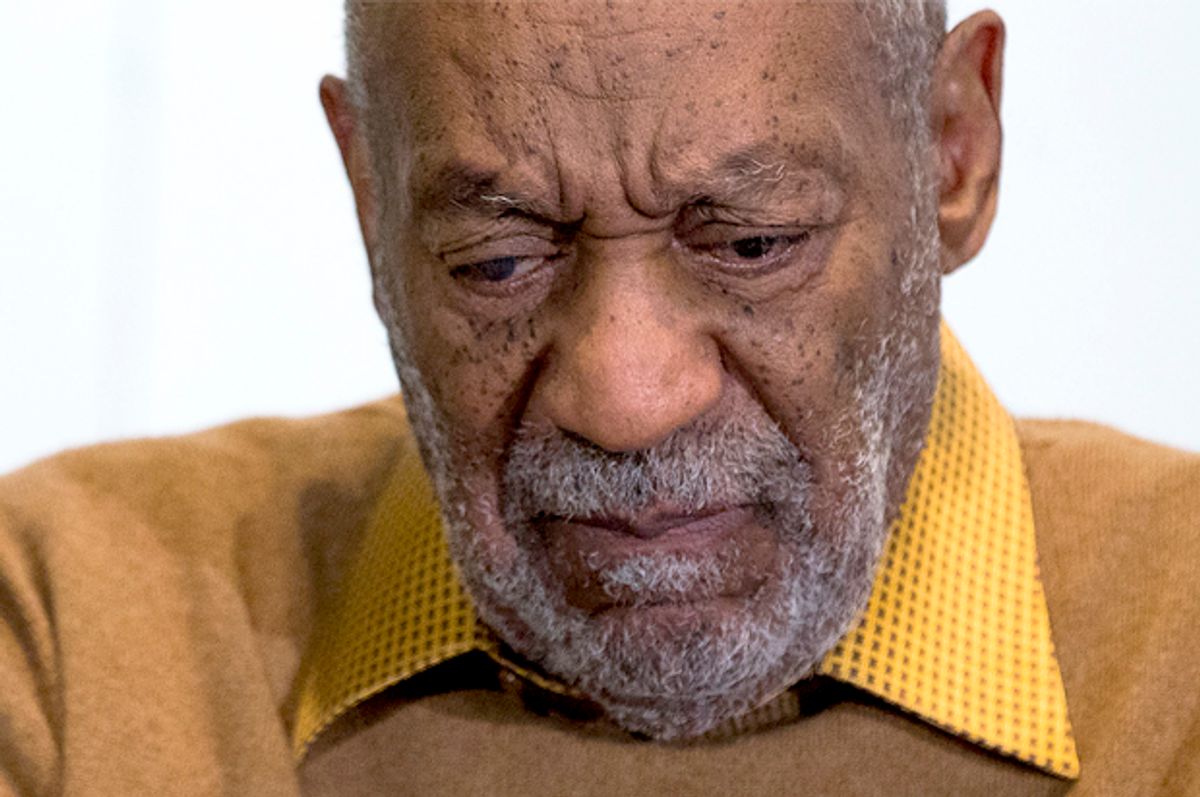 According to a report from Variety, NBC is currently facing “mounting pressure” to drop a sitcom in the works with alleged serial rapist Bill Cosby. The allegations that Cosby drugged and raped more than a dozen women are not new, but the network’s apparent unease about working with a reported sexual predator is very much a recent development.

Why is that, exactly? For the same reason that the NFL continues to egregiously and unapologetically fumble its handling of domestic violence among its players, from Ray Rice to Adrian Peterson. Because the press got intolerably bad.

NBC hasn’t confirmed whether it will cancel the project with Cosby, but you can imagine what the backlash might look like if the deal holds. The show was being pitched as a “domestic comedy,” with Cosby as the beloved patriarch overseeing a multi-generational family of children, in-laws and grandchildren. For some viewers, the yuppie bohemian allure of “Parenthood” may be marred by the fact that, in real life, Zeek Braverman is a right-wing banana brain, but asking audiences to swallow humorous life advice from a man who is reported to have drugged and raped 14 women (and counting) is probably a stretch.

The public, it seems, is turning against Cosby. Risk alienating viewers, and advertisers get nervous. Watch enough television and you can probably predict the commercials that would run with a show like what's in the works for Cosby. Kids eating cereal, moms using cleaning supplies, dads smiling in sport utility vehicles. But I bet you’d be hard-pressed to find a company that wants to attach its brand to an alleged serial rapist at the precise moment the public is catching wise to the allegations against him.

And if talking about NBC’s calculus around working with an alleged serial rapist in terms of advertising dollars grosses you out, that’s probably because it’s really gross. But it’s also really, you know, real.

The allegations against Cosby have reached an unprecedented level of visibility in recent weeks. A viral bit from comedian Hannibal Buress reignited the entire conversation. Another woman has come forward saying that she was drugged and assaulted by the comedian. The Washington Post ran an editorial from Barbara Bowman, who has unflinchingly shared her for a decade. This weekend, NPR host Scott Simon did what so many others in the media have refused to do by asking Cosby to comment on the startling number of allegations against him.

It’s clear that public awareness has shifted as a result of all of this media attention, but I’m going to guess here that NBC hasn’t learned much that it didn’t already know going into the project. What changed is how mad the public seemed about it.

The same could be said for how the NFL, and particularly its clown/villain hybrid of a commissioner Roger Goodell, has opted to handle the issue of domestic violence within its ranks. After a dizzying process of penalizing and not penalizing Minnesota Vikings running back Adrian Peterson, a man who stuffed leaves in his 4-year-old son's mouth while he beat him with a switch, Goodell suspended Peterson without pay for the remainder of the season.

Goodell’s stated reason? To prioritize the safety of Peterson’s son and send a message that the player's lack of remorse around his physical abuse is unacceptable, out of line with the league’s values. But anyone who has been paying attention to Goodell, even one second of attention, knows this penalty is more about Goodell’s self-image and the league’s reputation with advertisers than any gesture at safety or accountability for victims of abuse.

Now here’s the part that feels tricky, at least for me. I want NBC to drop Cosby’s sitcom. I want NBC to have never even considered the sitcom in the first place, since these allegations have been a damning part of the public record for a decade now. I want to exist in a culture that sends a message about not working with serial predators. Likewise, I want the NFL to take action to sanction Peterson for brutalizing his child, just as I want the league to take action against any player who assaults another person.

But I am also so weary of empty gestures that don’t address the root problems and allow massive corporations to escape the kind of accountability that might stop them from, say, working with a serial predator in the future or, say, pressuring victims of domestic violence to stay quiet and arbitrarily wielding its power to protect its bottom line. I am tired of obscenely wealthy corporations thinking the public is stupid, beyond easy to placate.

In addition to seeing Cosby dropped, I want to see the network take responsibility for ignoring these allegations until this week. I want some explanation from producers Mike O’Malley and Mike Sikowitz about why, exactly, they didn’t think they warranted consideration until it became a brand crisis. Or why network entertainment chairman Robert Greenblatt said allegations that Cosby drugged and raped more than a dozen women (“the other things”) would just “sort themselves out.”

I don’t want a sanctimonious letter from Roger Goodell chastising Adrian Peterson. I want a transparent agreement to be negotiated between the NFL Players Association and league executives that will lay out how it will handle these issues moving forward, so that victims will have a sense of safety and protocol if they need to report abuse, regardless if there are criminal charges. I want the NFL to give millions and millions of dollars of its absurd wealth -- on a reoccurring basis -- to prevention and assistance programs that, unlike Roger Goodell, know how to do this work.

I want, perhaps more than anything, for people to matter more than money. For humanity to prevail, even when advertisers aren’t circling.