Tracy Pollan: "People give up when it comes to the family meal. For me and Michael, it was a priority"

The actress and cookbook writer (and Michael J. Fox's wife) learned important lessons at dinner, and passes them on 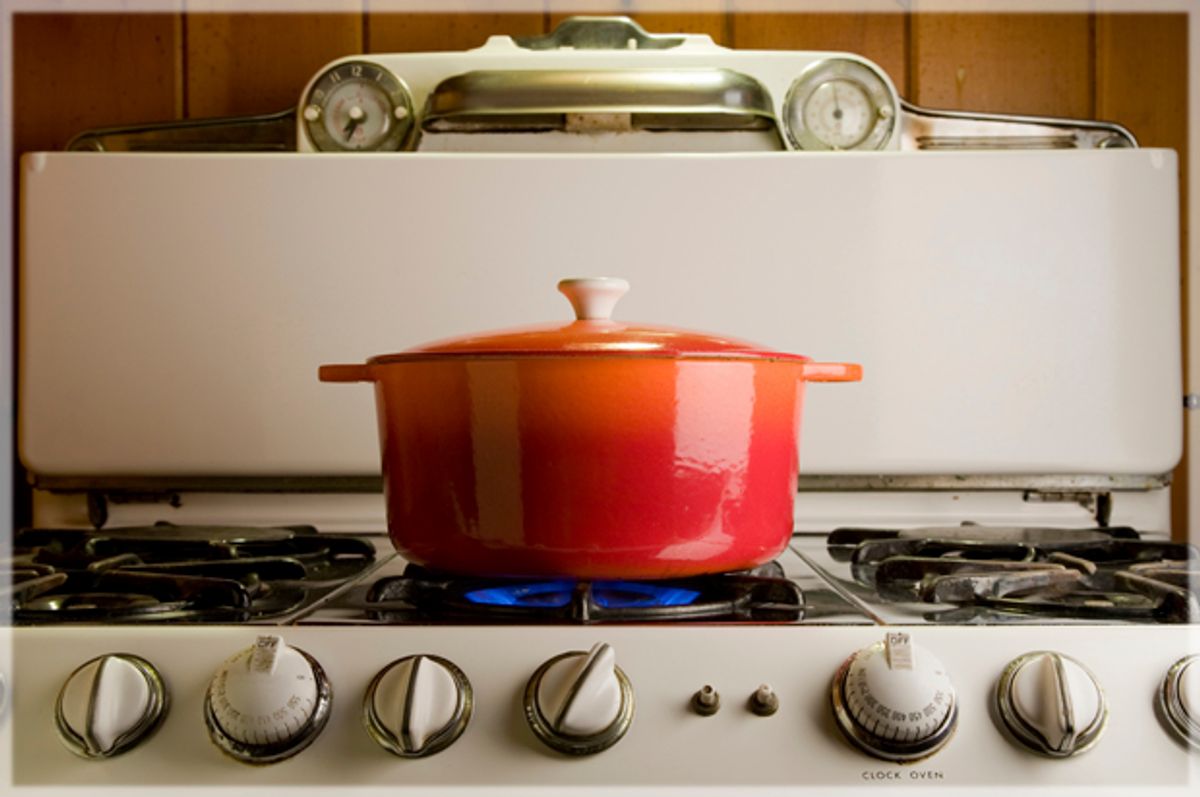 While I was growing up we had family dinner every night – certainly every weeknight. You don’t realize as you’re growing up how critical that is to how you develop as a person and how you relate to people – not just your family, but the rest of the world, really. Start school and your days start to get very busy and everybody is running off in different directions. You kind of need that time at the end of the day to reconnect.

I remember being exhausted after a day at school, and then I had after-school activities. I come from a big family, with four children and all. And I remember all of us running in the door, dropping our backpacks at the kitchen table, and pulling out our homework, and sitting and talking to my mother as she started to get dinner on the table. And as we’re sitting there, the smells wafting through the kitchen, and getting excited about the meal that was coming. And then all of us just taking that time — whatever it was, sometimes just half an hour, sometimes we had the luxury of more time – sitting there and all eating from the same common pot. So not only are you sharing the same food, you’re sharing this time together. And to me, it brought us closer as a family, and a lot of my memories are shaped by those meals together.

I now, as an adult, look back and realize how important that time was. Not only to making those family relationships more important, but also it was when we learned how to have conversations with each other, to listen, to take the floor and be able to speak – to learn how to be in a civilized situation as a very young child. We talked about everything – we’d talk about current events, we’d talk about politics, then we’d talk about what we had for lunch at school. There was tons of laughing and joking.

So what happens is you have all of this discussion, and you have a love of sitting down with your family. But the other thing that happens is you become very comfortable in the kitchen – we’re watching my mother work, but then we all started helping. She counted on us to get dinner started, so that when she got home, she did the lion’s share. But it was the way we all learned how to cook.

That’s the other thing that’s so crucial: It’s so important to teach your kids how to cook. It’s a life skill that’s precious. We know that we need to teach our kids how to drive, to teach them how to swim. But we don’t realize we need to teach them how to cook -- which is really how to take care of yourself -- and make sure that you are going to eat the healthiest food possible with your family.

My son is five and a half years older than my twins, so I had the experience of having an only child at the table for some time. He always had a book with him.

I met my husband, who also comes from a big family, and he was used to having family dinner every night. I don’t think we knew that there was an alternative, and that was what was so important to both of us – that time together as a family. I’d start to make dinner – at first for just the two of us – and we’d sit down together. And then when my son came along ... You go through all different incarnations with your kids. When I just had one child, there’s not the same give-and-take: It’s all ears if that kid wants to talk.

It takes a while to establish it, and to get everyone on the same page, eating the same food. To make it a time without texting, without doing your homework. I guess the key for Michael and me was that we made it a priority. People ask, “How do you get your kids to do that?” Well, How do you get your kids to shower? They don’t always want to shower. They don’t want to brush their teeth. A lot of times they want to wear their pajamas to school. And you just decide that that’s actually not OK. I think people give up a little bit when it comes to the family meal. For me, it was a priority; for Michael, it was a priority.

We had rules: You couldn’t watch TV while we were eating dinner. We’d play little games. I remember when my kids were little, we’d ask, “Tell me the funniest thing that happened to you today.” And they would take turns – and they were excited by that. And we’d ask, “Tell me what made you the most angry today.” We’d start with questions that would be interesting for them and us to answer – not just, ”How did you do on that test today?” A lot of people use that time to bring up negative things. But we tried to make it a timeout from anything that people wouldn’t enjoy talking about. It was kind of a time when everyone could just sit down and go, Hey, this is 20 minutes or half an hour, where I don’t have to do anything but eat this meal, unwind, relax and reconnect. And now, they really look forward to it.

The same goes for the food: It takes a while to get everyone on the same page. Kids are picky, they don’t want to eat this, don’t want to eat that. When I was younger, my mother wasn’t making special meals for us: There weren’t chicken fingers on the table. There’s definitely been a little bit of change in how things are done with family meals. Your kids aren’t going to want to eat everything you serve, but they’re going to want some of it. So I try to have one or two things I know they’d love, and keep the rest on the table as a kind of offering. And as they got older, they’d want to try it, or their older siblings would eat it, so it would seem more appealing.

Some of my friends, people close to me, would love to do a family dinner – they do it sometimes, but they can’t do it all the time. I think there are a few factors at work. In most families, both parents are working, and they get home late. It’s difficult when both parents are out of the house to get dinner on the table. Kids are more overscheduled: My kids have so much homework. It would be really hard for them to make the salad, like I did, or make the sauce for the vegetables.

So I think it takes more planning and organization. That’s what we tried to do in our book, "The Pollan Family Table": to simplify it. One of the things that’s been the most gratifying about the book: the emails and the Facebook posts and the tweets from people saying, “I can’t believe I was able to make this, and everybody loved it.”

I think what we’ve been able to accomplish is to get together a little over a hundred recipes that are pretty straightforward and easy for people to follow. I don’t know that there are a lot of other books out there where you can take a recipe and follow it from beginning to end and have an amazing result. A lot of cookbooks are written by chefs, and they’re great to look at, with beautiful pictures. But they’re not accessible to everybody, and they’re not accessible when you have only half an hour. So what we did was basically we said, We’re not chefs – we’re moms. But we’ve made this a priority, and if you want to make it a priority, we can make it a little easier for you.

One of the things that really simplifies it is that in the recipes we have the shopping list. Shopping takes up about half the time of cooking; figuring out how much you need of everything can be very time consuming. To be able to take a picture of the shopping list and take it to the grocery store cuts the time in half. And then having straightforward recipes where you have most of the ingredients in your kitchen already. As well as tips like, try to plan a few meals in advance rather than waiting till that night. If you can get a little bit organized it’s a lot easier to do. Or make something on Sunday that you can have on Wednesday – you stick it in the freezer. We took some things we considered common sense, but realized that just because we’ve been doing it for so long, they were common sense to us, but not necessarily to everybody. A lot of people miss this, because they grow up with it, and would love to start over again with their own family.

I’ve noticed that there’s this really big divide between people who are cooks and people who say that they’re not cooks. Either, “I can do it” or “I can’t do it.” It’s not like, I can play the violin or I can’t play the violin – that’s a fact. You can or you can’t. But everybody can cook. You’re not going to be an amazing cook, but you can take a recipe and get a good result from it. You can start slowly – “I’m going to do this once a week.” If you have a Wednesday family dinner, that’s fantastic. That’s great – go from there.

If I think of taking out that time of the day, I look at the concentrated periods I have with my kids, and they’re very few and far between. I mean, maybe climbing into bed with my daughter before she goes to sleep, and hearing two sentences about what she did at school. The rest of the time, my kids are racing to catch the bus, they’re rushing back into the house because they forgot something, they’re calling me on the phone to ask me to edit a paper … it’s always a pretty busy time. If I didn’t have that half an hour – or on a perfect day, an hour – I’m not getting a lot of time with them. I’m not hearing about how they got upset at school, because someone said something, or how they decided they want to run for advisory president … That’s where I’m hearing it. So without those dinners, I think you’re missing out on quite a bit.