What I wish I'd asked Bill Cosby: How I learned that entertainment journalists can play hardball too

Over the years, arts reporters gave Cosby a pass again and again. I know the template -- because I followed it 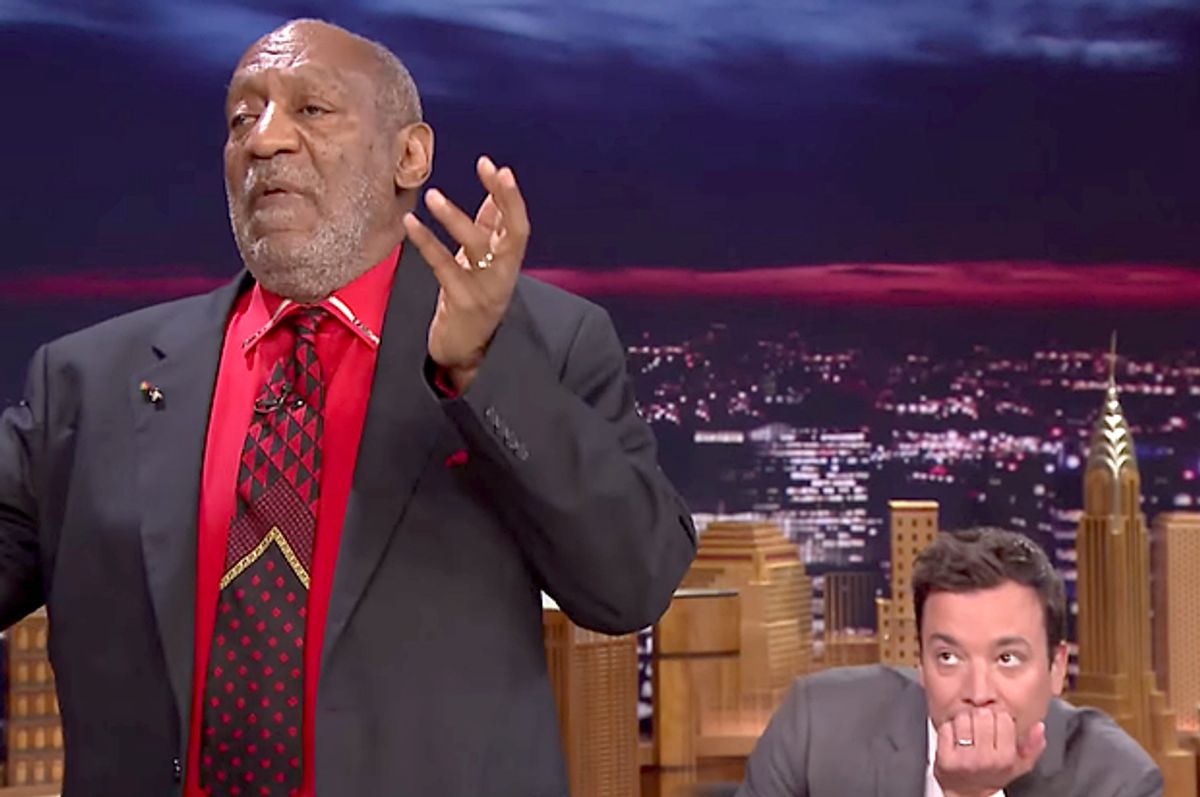 Two years ago, I worked for my local public radio station’s news division, and the press agents for the venue where Cosby would be performing on his national tour offered a phone interview. My editor and I prepped an interview about comedy in general, how it’s changed and the philosophy of humor (hey, it’s public radio), and looked forward to figuring out how to edit down 15 minutes of Cosby’s signature pause-riddled speech rhythm into a four-minute slot. We had no discussion that I can recall about the 2006 out-of-court settlement or Barbara Bowman’s allegations. It simply wasn’t on the radar. He’s Bill Cosby, he’s on a stand-up tour, and I’m an arts reporter. I was going to ask him about his art. And that’s my failure.

This memory returned to me in full force during Scott Simon’s "Weekend Edition" interview with Bill Cosby, during which Simon -- as he should have -- asked the entertainer to address allegations of sexual abuse, and Cosby replied with dumbfounded silence.

Then yesterday, the Associated Press released the unedited portion of a videotaped interview with Cosby, which concerned a Smithsonian exhibit showcasing Cosby and his wife Camille’s African art collection. The interviews were conducted after comedian Hannibal Buress called Cosby a rapist in his own stand-up act and after #CosbyMeme made the Twitter rounds pairing wry anti-rape jokes with photos of Cosby at his goofy-dad finest, making the long-standing allegations difficult for reporters to continue to ignore. Cosby knew the allegations were back in the news, denying a Newsweek comment on an interview with Barbara Bowman and a publicist-issued statement dismissing Tamara Green's allegations back in February. But he did the press for his Smithsonian exhibit anyway, likely because he assumed the questions would focus on his status as an art collector.

At the end of the interview, when questions about rape allegations are in fact raised, Cosby refuses to answer, and then presses the journalists in the room to not even mention the questions in their story. And it almost works. In the published AP story, the controversy gets a cursory mention in the final paragraph.

“We thought, by the way, because it was the AP, that it wouldn’t be necessary to go over that question with you,” Cosby lectured the reporter and off-camera producers after the interview was over, but before the microphones and cameras were turned off. “We thought that the AP had the integrity to not ask,” he said.

The arrogance to assume that hard questions are off the table because of who you are and to whom you’re speaking, and where — the Smithsonian — feels shocking now in its naiveté. But Cosby had every reason to expect that the subject wouldn’t come up — not from the AP, not from NPR, not from anyone with a larger audience than Hannibal Buress -- because entertainment journalism has largely given him a pass on the subject over the last 10 years.

The Atlantic’s Ta-Nehisi Coates wrote yesterday about his own experiences publishing a profile of Cosby in 2008 that left out, against his better judgment, the conclusions he had drawn about the rape allegations:

“But Cosby was such a big target that I thought it was only a matter of time before someone published a hard-hitting, investigative piece. And besides, I had in my hand the longest, best, and most personally challenging piece I'd ever written….

I don't have many writing regrets. But this is one of them. I regret not saying what I thought of the accusations, and then pursuing those thoughts.”

And that’s in the Atlantic, in an in-depth piece about Cosby’s politics, where his personal life and alleged crimes would have been relevant to the story. When it comes to routine press about his shows and arts projects, Cosby interviews follow a certain pattern: comedy now and then, his history and influence, with maybe some time for Cosby to expand on his own politics without much, if any, challenge or debate.

Here’s a standard Yahoo piece on the Fat Albert reboot and his new (now-shelved) NBC show from earlier this year that included an interview with Cosby, and a Wall Street Journal interview from last fall, which follows the pattern pretty well. I recognize the template because I followed it, too.

My interview, by the way, was a disaster. When I got Cosby on the phone, I introduced myself and started to ask my first question, but he cut me off to ask me about college basketball and where I went to school. I thought it was odd, but I rolled with it, figuring he wanted to establish some kind of NCAA-based rapport, given his passion for Temple University.  I gave him my alma mater with a lighthearted Division II joke, tried to move on, and again he cut me off, correcting me on how I should have asked my question.

Then the interview went pretty much off the rails. He rattled me with his constant interruptions and so after a few minutes I just let him talk, since he was ignoring my questions anyway. I wasn’t prepared for a hostile interview — I rarely had them on my beat — and it showed. He ran the game. Little of what he did offer was particularly revealing, but neither was it offensive. We could edit it down to four minutes and the piece would be serviceable enough. It struck me about halfway through one of his extended rambles about how funny he is that he must have asked me about college and basketball, and then so helpfully schooled me on my interview technique, because he thought he was speaking to a student reporter at a college-based radio station. I was 35 at the time.

I chalked the Cosby interview up to a lightly unpleasant professional experience; I just figured he was one of those rare artists who resents the whole promotion process and takes it out on the reporter in passive-aggressive ways. It’s an anecdote: ha ha, Bill Cosby isn’t exactly Cliff Huxtable in real life! But watching how he spoke to the AP reporter in last week’s interview gives Cosby’s act in our conversation a whole new context. This is a guy who isn’t at all reluctant to use intimidation tactics to get what he wants.

The question we’re asking this week, after that NPR interview aired — how can an open secret like the rape allegations go largely unexamined in the mainstream press for so long? — points me back to my own reluctance to step outside of the narrow, self-inflicted bounds of entertainment reporting to actually practice journalism when I had the chance to do so. Cosby, a veteran of the entertainment press for generations now, knows that game, and has exploited its easy rules for years.

Here he is in August of this year on "The Tonight Show," joking around with Jimmy Fallon about his wife and their sex life. Fallon giggles along as Cosby goes on a riff about “the most frightening things you can hear from your wife on your birthday when you are carrying on — you understand? — The most frightening thing at age 77 is to hear your wife, who is seven years younger than you, say keep going.”

Sure, it’s "The Tonight Show," not Frontline. But it’s clear from his astonishment and indignation at NPR and the AP, two hard news organizations, that Cosby equates all arts and entertainment reporting with going on Fallon’s show to tell some jokes and bask in the adulation he’s earned as a groundbreaking entertaining legend. He feels so secure in that interview he opens the door to his own sex life without fearing that Fallon would go there. And, of course, Fallon didn’t.

What Cosby didn’t anticipate during those Smithsonian interviews is that the game is changing. Just as we no longer expect political reporters to look the other way on politicians’ infidelities in exchange for access, we can’t allow ourselves to avoid hard questions just because we’re not always covering hard news.