Anarchy in the GOP: Why Obama’s immigration move exposes the right's lunacy 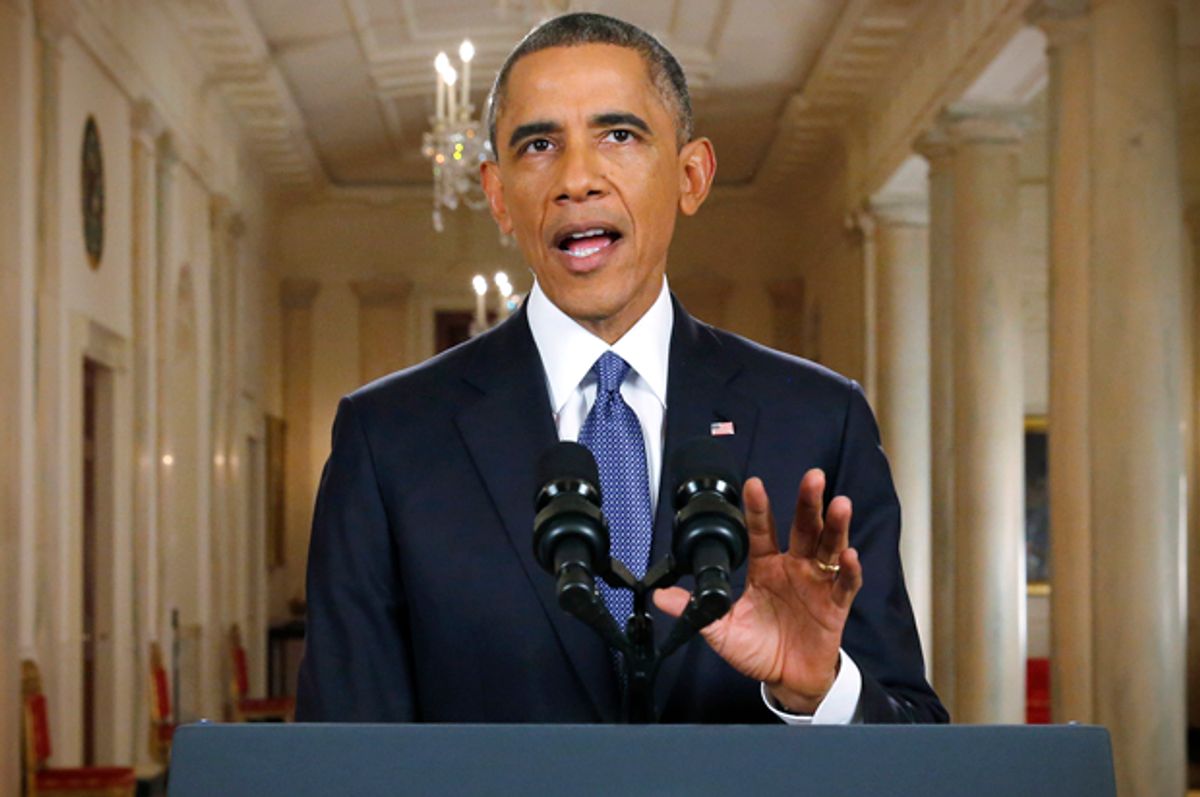 Well, he did it. Thursday night President Obama finally went ahead and threw a “partisan bomb” that may cause “violence” and “anarchy” and might even warrant a “jail penalty,” in the words of Republicans in Congress.

Those weren’t the comments of wingnut bomb throwers, by the way, but Rep. Paul Ryan, Sen. Tom Coburn and Rep. Mo Brooks respectively, in advance of the president’s speech. What they got Thursday night was the best of Barack Obama: sometimes hard-nosed and pragmatic, touting his record in cutting illegal border crossings cut by half -- they’re now at their lowest level since the 1970s – then lyrical and moving, even spiritual: "Scripture tells us that we shall not oppress a stranger, for we know the heart of a stranger – we were strangers once, too.”

That line moved MSNBC’s Chris Hayes and appalled Fox’s Bill O’Reilly, which confirmed a heartbreaking realization I had mid-speech: If you love Obama, this is the guy you love. If you hate him, sadly, this is also the guy you hate.

Even though Megyn Kelly had a belated spasm of conscience Wednesday night and confessed that her network wasn’t being honest when referring to Obama’s action as “executive amnesty,” because "amnesty is citizenship and that's not what [Obama] is talking about,” her colleague Ed Henry immediately referred to Obama’s new move as “amnesty.” Kelly had explained why her team uses the word: "That's a hot-button term that the right uses to sort of get people upset." That’s why Fox’s White House correspondent had to use it to slur Obama’s fine speech.

So did Sen. Rand Paul, the most interesting man in politics, Tweeting:

Thus did all wings of the Republican Party work hard to depict the president’s moves as a shocking tyrannical provocation, even though he’s been telegraphing this plan for months, and it’s on the same scale as a similar move by President George H.W. Bush. Both presidents deferred deportations for roughly 40 percent of the immigrants living illegally in the U.S. via executive action.

Now the supposed grown-ups of the GOP have to cope with the fury of the base and the right flank in Congress. We’ll see if telling them that Obama’s Bush-like action is tyranny helps them pass a long-term budget bill and avoid a government shutdown. Sen. Lindsey Graham had a sad on Thursday over remarks by outgoing Rep. Michele Bachmann that Obama was giving amnesty to “illiterate” voters. There’s no amnesty, and the people whose deportation is deferred won’t have voting rights, but other than that, Bachmann’s spot on.

No, seriously, she’s not only wrong about what the president’s action achieves, she’s also racist. But Republican leaders like Graham have placated and indulged the loons like Bachmann, and they can’t control where that lunacy goes from here.

Mitt Romney immigration advisor Kris Kobach went Bachmann one better on Thursday, agreeing with a caller in a radio interview that Obama’s moves might amount to “ethnic cleansing,” presumably of white people. "The long term strategy of, first of all, replacing American voters with illegal aliens, recently legalized, who then become U.S. citizens," Kobach said. "So maybe this strategy of replacing American voters with newly legalized aliens, if you look at it through an ethnic lens, ... you've got a locked in vote for socialism."

That’s the lunacy GOP “grownups” have enabled over the last six years. Good luck with your “governing” agenda, Mitch McConnell!

Oh, and by the way, even with all that drama -- a nation on the verge of “anarchy,” a president facing threats of jail – the networks didn’t bother to air Obama’s remarks. Their reasons were craven and clearly profit-driven, yet the networks’ shoulder-shrug served to underscore how out of proportion the GOP’s histrionics really are. That was inadvertent, and they should still be scorned for snubbing the president and limiting the audience for an amazing speech. I’m not sure how many minds it could have changed, but the number is fewer thanks to the networks’ bad decision.