It's been freezing in parts of America this week, which can only mean one thing: More fighting about global warming 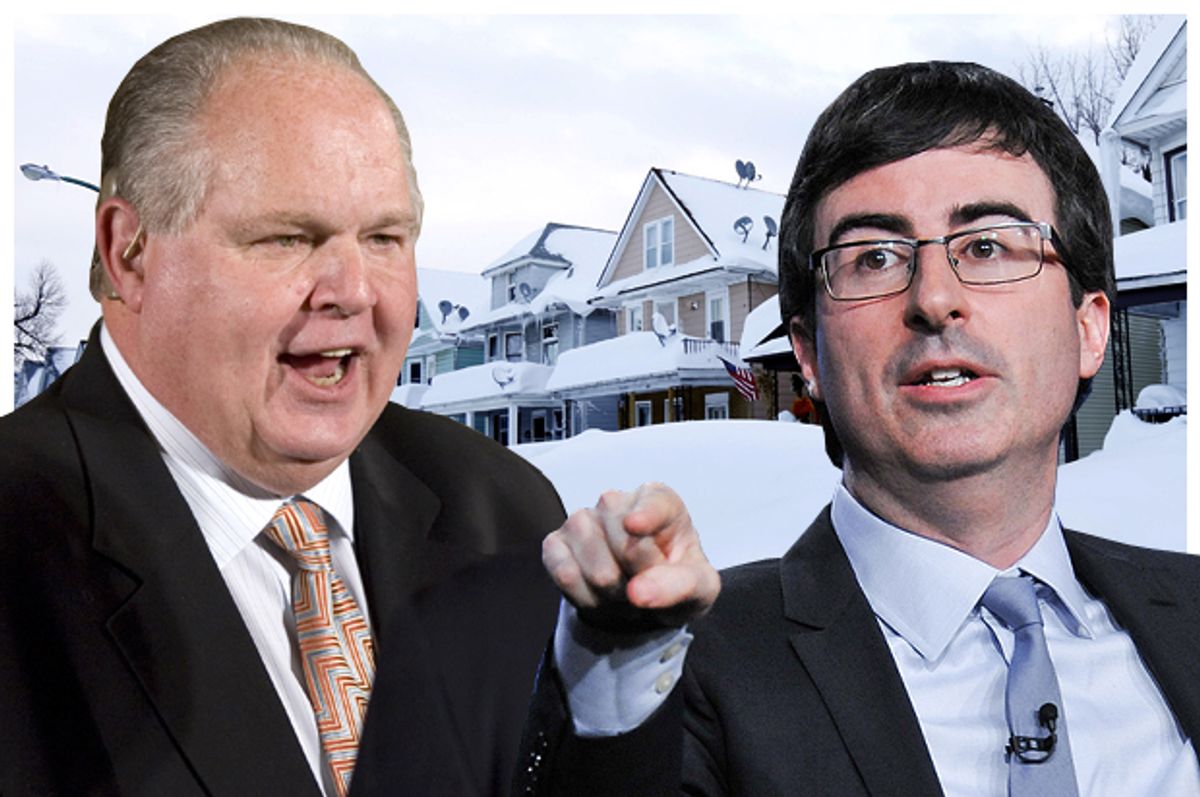 All weather, after all, now takes place in a changed climate. And all weather also now takes place in a changed, charged political climate, where major policy decisions are being made and debated in the recognition that human activity is altering the planet. And when that weather looks different from what the phrase "global warming" would suggest, things can get ugly.

For example, this is an actual question being asked in the right-wing blogosphere: Didn't President Obama just strike a deal with China and pledge $3 billion to developing nations because it's supposed to be getting warmer? Right before Tuesday set records as the coldest November morning since 1976, with freezing temperatures experienced in all 50 U.S. states? And with Buffalo literally buried in snow? (For the record, one has absolutely nothing to do with the other.)

Whenever extreme weather occurs these days, it's become the natural impulse to ask whether climate change could have anything to do with it. This isn't climate scientists debating whether climate change is happening -- because they aren't -- it's them debating if and how those changes are manifesting right now. And while we can't say whether climate change directly caused any one event, we can speculate as to whether it made that event more likely. Take upstate New York's tremendous snowstorm, for example. Seventy-six inches of snow is definitely bonkers, but lake-effect storms, as climate scientist Roberto Mera explained to Salon, are a completely natural phenomenon. All they need are the right combination of variables: in a nutshell, dry, frigid air that descends over relatively warm bodies of water.

That said, it's possible to push that explanation further and speculate that climate change could be messing with those variables. As meteorologist Eric Holthaus explains at Slate, a lake-effect storm's power comes from the difference in temperature between the lake and the air. Lake Erie is warming, causing more moisture to evaporate into the atmosphere and creating the potential for more massive snow dumps. And it's not just lake effects: Mera notes as well that the total amount of moisture in the atmosphere is increasing, meaning that while global warming will make winter shorter and milder, snowstorms, when they do occur, may be noticeably snowier.

The climate question was even more controversial last winter, when the dread polar vortex descended upon the eastern United States. Rush Limbaugh provided one of the most extreme examples of that when he accused the liberal media of inventing that "hoax" to serve their "global warming agenda." Of course, the polar vortex -- a low-pressure system of very cold air that hangs out over the Arctic -- isn't new, and its collapse to lower latitudes wasn't new either. But the previous times that the vortex hit the U.S., we weren't talking about it in the context of climate change. Last winter, we definitely were -- many on the right cited the frigid weather as "proof" that climate change isn't happening, while the White House took the opposite tack, with chief science adviser John Holdren citing recent research to suggest that climate change could actually make cold spells like that more likely in the future.

That research is still far from being considered settled science. But basically, the theory stems from the fact that the Arctic is rapidly warming -- at about twice the pace of lower latitudes. In this case, that's causing the temperature differential between the Arctic and the tropics to lower, possibly altering the jet stream. (Or, to put it more colorfully, it's causing the Arctic to stumble around drunk.) This could be increasing the likelihood of all sorts of extremes: not just cold, but heat, too, as well as both precipitation and drought. This winter's cold, however, was more likely caused by Super Typhoon Nuri and that other made-up-sounding phenomenon: the Bering Sea bomb.

Those debates aside, here's what it's important to know about winter: cold extremes are expected to occur less frequently as global warming progresses, and they're already being outpaced by record highs. And from a pulled-back perspective, many outbreaks of cold that feel significant actually aren't. That's because as the global temperature creeps upward, our baseline for normal increases as well. To anyone younger than 30 who's become accustomed to above-average temperatures, a cold day can feel like THE COLDEST DAY EVER. The Web comic XKCD nails that phenomenon: Right now, meanwhile, while much of North America is shivering, Alaska is experiencing unusually mild temperatures. And as a whole, global temperatures are higher than average: If you want to talk about a truly incredible record, you need to pull back and look at the entire planet. The National Oceanic and Atmospheric Administration just released data showing that last month was the warmest October ever recorded, meaning that 2014 is on track to be named the hottest year on record -- even with November's very low lows and without an El Niño event, which tends to give temperatures a boost. Mera told Salon he's "pretty confident" that 2014 is going to set that record, and NOAA seems pretty confident as well: Our odds of setting another annual cold record, on the other hand, have become astronomically small.

And yet the most trollish of climate trolls are still trying to base their critique of the Obama administration's climate policy on the fact it's cold outside -- the laziest argument they could possibly make (and fortunately, one that's ridiculously easy to debunk). As the U.N.'s International Panel on Climate Change concluded, the warming of the climate is "unequivocal," and human influence on that warming is "clear." And there's nothing controversial about that.