GOP's outrage trap: How to confront Obama on immigration without making themselves look crazy 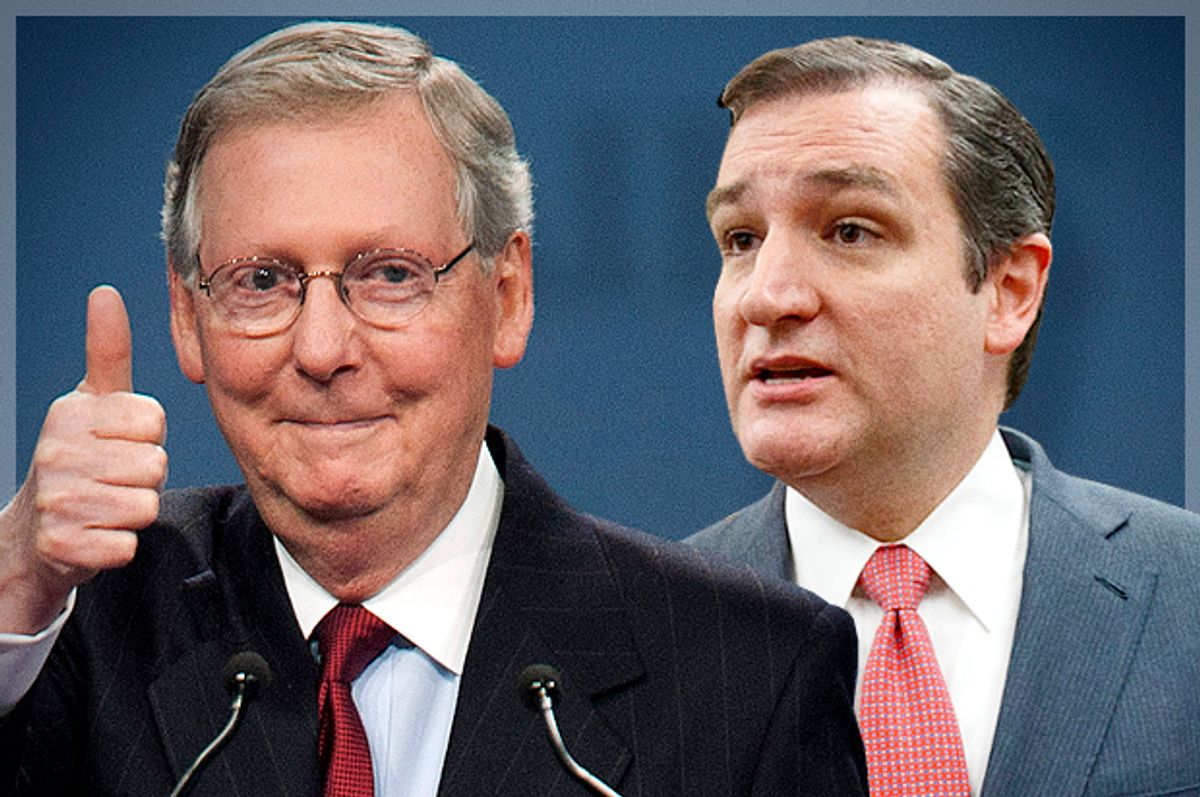 So President Obama gave his big speech last night laying out his executive actions on immigration. He’s going to allow the undocumented parents of U.S. citizens and legal residents to apply for deportation relief, so long as they’ve been in the country for at least five years. Obama’s also expanding eligibility for the existing Deferred Action for Childhood Arrivals program.

Roughly 4 million undocumented immigrants will be eligible for protection under the initiatives the president laid out. The two big questions now – politically, anyway – are how this action will shake out for the president, and what Republicans intend to do about it. Mitch McConnell was on the Senate floor yesterday promising that the Republicans in Congress will take swift action to counter the president.

The problem is that the Republicans can’t actually agree on what that action should look like. There’s a very good reason for this: They’re trapped between two largely irreconcilable forces. On the one hand, the sheer volume and intensity of outrage coming from the right demands that they do something dramatic to counter the president. On the other hand, any response that’s sufficiently dramatic to satisfy the feral screamers on the right will almost certainly alienate everyone else in the country.

Despite what many conservatives would have you believe, the big debate over Obama’s immigration maneuvers isn’t over whether they’re legal, but whether they’re a deviation from political norms. There’s a strong case to be made that they’re not. The New Yorker’s John Cassidy argues that all Obama is really doing is preserving the status quo for immigrants who have long lived in violation of U.S. law, but without much fear of repercussions. Vox’s Dara Lind points out that George H.W. Bush used his executive authority to create a new program called Family Fairness that protected the spouses and children of undocumented immigrants who’d qualified for amnesty under the 1986 Immigration Reform and Control Act. The creation of that program actually spurred Congress (at that point controlled entirely by Democrats) to draft legislation that superseded Bush’s unilateral action. “The big difference between Bush's and Obama's moves,” Lind concluded, was “not what they did, but how Congress felt about what they did, and what the opposition party did in response.”

Bush had an opposition party that would work with him. Obama does not. The Republican Party and the conservative movement that powers it have spent the past six years in a perpetual state of outrage. Everything the president does draws the same howling, angry response: Obama’s a dictator, a socialist, a tyrant, anti-American, etc. There’s utility in that, as they always have a villain to rail against, and they’ve made substantial electoral gains by simply being the anti-Obama.

But now the president is actively provoking them on an issue that’s proven horribly divisive for the GOP in the past, and it’s putting them in a very difficult position. Already the conservative outrage machine has kicked into high gear. Turn on Fox News or click over to National Review and you’ll see hyperbolic denunciations of Obama as a “king” or an “emperor.” Similar language is being employed by Republican firebrands in Congress like Ted Cruz. Sen. Tom Coburn said that Obama’s actions could lead to violence in the streets. Rep. Steve King said Obama is “throwing this nation into a crisis.” The strong consensus among hard-line conservatives (reinforced by the right-wing echo chamber) is that the president is guilty of a grossly unconstitutional action and a strong, severe reaction is needed – a government shutdown, maybe even impeachment – in order to preserve the governing order.

And that makes life difficult for the Republicans in Congress who, while upset at the president, nonetheless realize that they don’t stand to gain much by going down those roads, which themselves are deviations from political norms and are likely to produce a tremendous backlash. And so while the die-hard immigration reform opponents and the Drudge-fueled conservative media are baying for blood, certain Republicans are trying to talk them down.

“The president wants to see an angry and intemperate response, thinking the Republicans will do something that leads to a shutdown,” Rep. Charlie Dent told the Washington Post. Don’t take the bait and don’t have a hysterical reaction. We can be strong, rational and measured.” John McCain acknowledged that intemperate comments from hard-liners in his party make it difficult to put together a credible GOP response. “That’s the trouble with having some of these new young punks around here. They ought to listen to us old geezers.” Hal Rogers, chairman of the House Appropriations Committee, is trying to convince his colleagues that instead of shutting down the government, they try a magical governing trick (that doesn’t exist) to defund Obama’s executive actions.

The problem for McCain, Dent, Rogers and their ilk is that the “young punks” often end up carrying the day, especially in the House, where John Boehner has proven himself singularly inept at corralling them or even insulating them from the influence of outside agitators like Ted Cruz. This has been particularly true of immigration – whatever grand designs Boehner has harbored have ultimately been usurped by Steve King and his bloc of nativists.

Given the risk to Republicans in overreacting, a strong case can be made for the Republican leaders to make all the motions of defiance that conservative outrage demands while quietly letting the issue expire. It’s a basic choice: Do they maintain the political status quo and content themselves with merely denouncing Obama as an extremist ideologue; or do they ratchet up their opposition to Obama and make themselves look like extremists in the process? One option seems far more intelligent than the other, but that’s obviously no guarantee the Republicans will pursue it.