Forget the "polar vortex" backlash: How I learned to love an overused media buzzword

Scientists complain about misidentifying this frigid meteorological phenomenon. Here's why I came to accept it 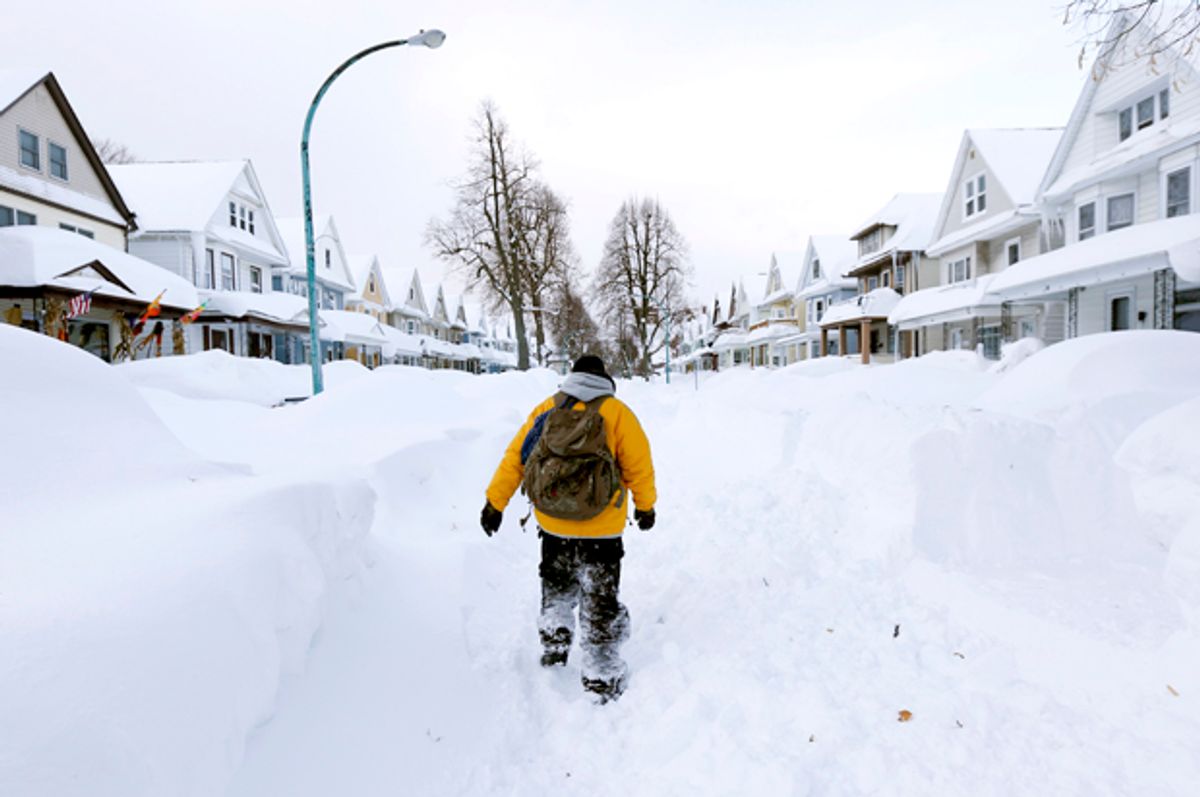 Here in the U.S., the polar vortex is back, repeating its attack from last year. Like last year’s event, this one is extreme; it is bringing unusually cold temperatures and deluges of autumn snow. And it just turned serious, with at least 10 people killed by back-to-back city-burying blizzards in Buffalo. The forecast now threatens flooding as temperatures rise and rain falls on snow.

Here, however, is where some expert observers will beg caution: In most of the rest of the country, it’s just cold. And, in the bigger picture, the polar vortex is repeating what it has done every year since long before there were human beings on the planet. There has always been cold air over the pole in winter, and it has always moved around and sometimes moved over us.

Some weather stories take the normal behavior of the atmosphere and turn it into hype. That bothers many professional meteorologists in academia and the media. But I’m making my peace with it. First of all, the hype becomes warranted when the weather brings real death and destruction, as it has this time. But also, it’s a sign of increasing public interest in the science of weather and climate, and we need that.

The polar vortex is a permanent feature of the earth’s climate. Actually, it’s closer to being two features. In the scientific literature, many uses of the term “polar vortex” refer exclusively to the blob of cold air over the dark winter pole in the stratosphere, high above where planes fly. This blob is encircled by a belt of intensely powerful westerly (west to east) winds, the stratospheric polar night jet.

Down in the troposphere – the lower layer of the atmosphere, where we live – there is more polar cold air. It too has westerly winds blowing around the edge of it, still high above the surface, but below the stratosphere. That’s the polar vortex that brings the weather. The edge of the tropospheric vortex wobbles around, and when the edge dips south of us, we get a delivery of that cold air from the pole, as we are now.

More grating to some is the way the term “polar vortex” burst on the scene last year. It seemed as though something completely new had dropped into the earth’s atmosphere from space. Last winter was indeed extreme in how far south the edge of the polar vortex dipped in the eastern and central U.S., and especially in how long it stayed there. This current event may well get into the same record-breaking ballpark (at least in terms of departures from normal for the time of year, and almost certainly for snow in Buffalo). But really pretty much every cold snap is related to the polar vortex to some extent. If one were inclined to be cranky, one could fairly say that headlines like “The Polar Vortex Is Coming Back” are just hype-speak for “it’s going to be cold.”

Yes, there do seem to be more overblown weather stories than in the past. My strictly unscientific, anecdotal assessment is that the atmosphere gets a lot more media coverage altogether, and more different kinds of coverage, than it did even just a couple of years ago. It’s a mixed trend, as some mainstream media outlets are cutting back on climate coverage; but online, there are quite a few journalists, bloggers and even entire websites staffed with people writing about nothing but weather and climate, often right as it happens, supplementing longer articles with rapid-fire social media activity.

While some over-hype is inevitable as our 21st century, 24-hour news media strikes on any topic, a lot of this content is really quite good. Some of these writers have advanced degrees in meteorology, write well and offer original, substantive analysis. (I first learned of Hurricane Sandy a week before landfall from Jason Samenow’s Capital Weather Gang blog for the Washington Post.) The reason there are so many of them is clearly that their employers recognize the devoted audiences they draw.

In the process of this rapid expansion of climate- and weather-centric coverage, new words sometimes get used in the scramble for eyeballs. Since we have always had weather, the sudden appearance of a new term can seem unwarranted. To some, the volume of coverage alone seems excessive.

But I actually think it’s fine. The stock market is always there, always fluctuating, and it gets covered perpetually. Are the atmosphere’s fluctuations less important? Are extreme weather stories less worthy than stories about crime? Celebrities?

Weather stories feed readers’ interest in science. While the existence of the polar vortex may be old news dressed up to sound new, long-lived extreme events like last winter’s -- and now this current one's -- still need more serious scientific research to determine why they last so long, how predictable they might be, and how they are related to global warming. (My professional take on the last: The research so far is not convincing.) The more media hype, the more coverage of that real science comes with it. With a large fraction of the country (and a larger fraction of the Congress) still denying the science on climate change -- the most important environmental challenge we face, even if not every weather event is attributable to it -- we need all the science education we can get, wherever and however we can get it.

Media-driven public interest can even influence scientific research for the better. A new research initiative, the Grand Challenge on Clouds, Circulation, and Climate, has recently begun under the World Climate Research Program, one of the primary organizations that coordinates climate research internationally. (Full disclosure: I am involved.) This Grand Challenge will focus on four questions, one of which involves understanding the variability of the storm tracks.

The storm tracks -- which are just what they sound like, the paths taken by storms -- closely follow the edge of the polar vortex. “Variability of storm tracks” especially includes events in which the polar vortex edge moves far from its normal position, and stays there a long time. Last winter’s extremes -- not just the cold in the U.S., but the intense storminess and flooding in the United Kingdom that came with the same polar vortex distortion -- helped to stimulate the discussion that led up to the formulation of this Grand Challenge question. And the media coverage helped us (helped me, at least) to recognize a little more clearly what we don’t know about these events.

So yes, a profusion of weather stories inevitably carries some hype as a byproduct. There may occasionally be new words, and sometimes bad science in the stories that accompany them. But plenty of the coverage is more right than wrong, educates interested citizens and even energizes professional scientists. Bring on the hype.

Adam Sobel, a professor at Columbia University's Lamont-Doherty Earth Observatory and Fu Foundation School of Engineering and Applied Sciences, is an atmospheric scientist who studies extreme events and the risks they pose to human society. Sobel is the author of "Storm Surge: Hurricane Sandy, Our Changing Climate, and Extreme Weather of the Past and Future," a new book about Superstorm Sandy. Follow him on Twitter at @profadamsobel. The opinions expressed in this commentary are his.