The post-Citizens United landscape looks bleaker than ever. Here's what we can do about it 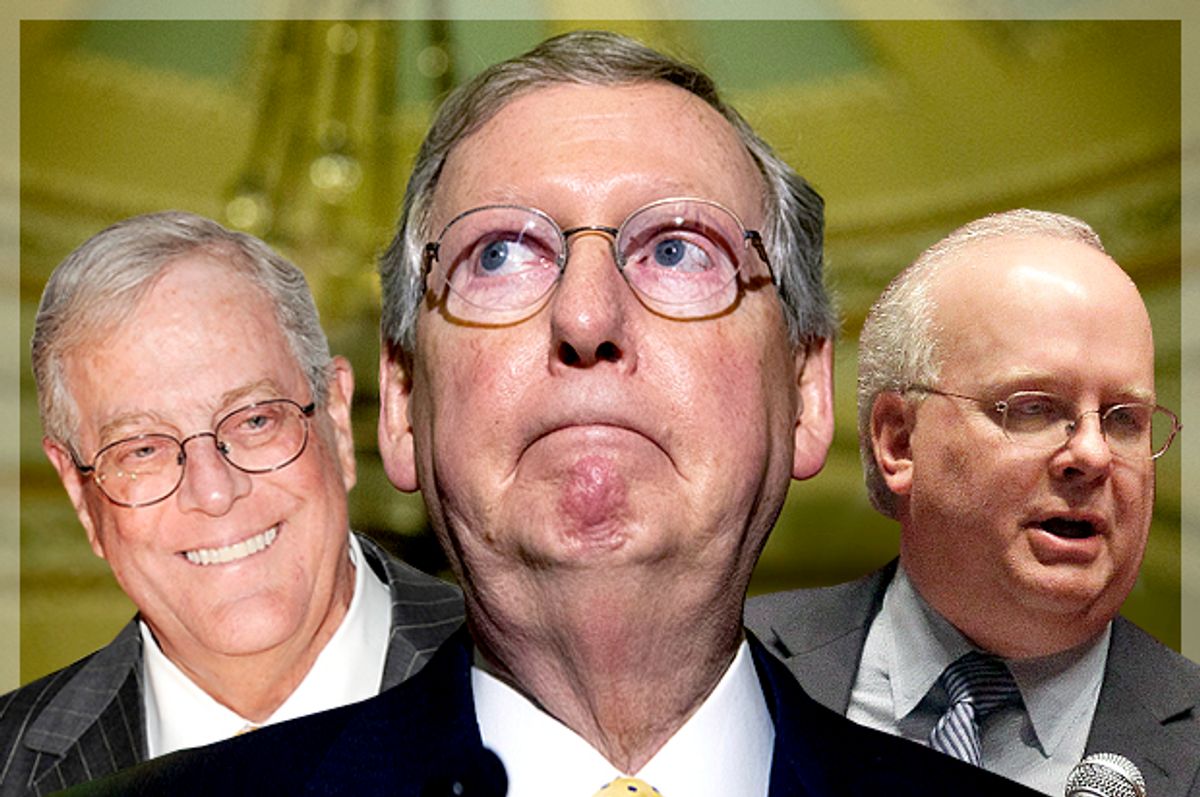 People milled inside a former men’s club, enjoying the roaring fire, the deep leather chairs and rare tapestries while talking of money and politics – something voters do while drinking at salons. On this particular evening -- six days before the midterm elections of 2014 and almost five years after the Supreme Court’s disastrous Citizens United v. FEC decision -- the buzz inside Santa Barbara’s University Club was about the onslaught of political advertising. For weeks now, strangers had been ringing voters’ doorbells, telephoning their homes at night, and stuffing their mailboxes with oversize, glossy, political brochures arguing for (and against) candidates and proposals.

“It’s gotten to the point where I’m afraid to answer the door,” said one man.

Corporations, unions, executives and professionals all over the land were pumping billions of dark dollars into this off-year election, yet no one seemed to know who was backing whom. “That’s exactly the point,” said Liz Kennedy, counsel for the New York-based Demos, a public policy organization. At the invitation of the Walter H. Capps Center for the Study of Ethics, Religion and Public Life at UCSB, the garrulous Kennedy was here to discuss our perverted “democracy.”

“Nonprofit political groups are being set up for the express purpose of hiding the identities of funders,” she said. As a result, America now has a donor class.

For the past few years, some of these donors have manufactured voter identification laws allegedly to stop the infinitesimal number of actual cases of voter fraud. “But these laws have impeded voters and blocked access to the polls,” said Kennedy. Many Americans, such as homeless veterans, single moms and unemployed dads, can’t afford to pay for the documents needed to secure a government-issued photo ID. Even so, this cunning voter ID law concept hits upon the perfect solution for the far more pressing problem of shadowy political funds.

We need donor ID laws, the sooner the better.

This off-year election may not have drawn many voters, but it attracted a ton of money. Much of the nearly $4 billion came from corporate executives, professionals, business associations and nonprofit groups designed to hide funders’ identities. Corporations are not required to seek approval from their stakeholders; in fact, shareholders don’t even have the legal right to know if and how a company is spending money in politics. A century ago, before the University Club opened, it was illegal for a corporation to spend money on a federal election. A classic private club member, Teddy Roosevelt, had won the presidential election with corporate backing, but once in office he urged the passage of the Tillman Act (1907), which outlawed “this sordid practice of blackmail.” That frustrated a lot of oil men and corporate trustees. Yet, Citizens United and other cases have taken us back to the robber baron days, spawning creation of super PACs, which accept unlimited contributions from corporate, union and individual coffers.

The donor class argues that even workers, through their unions, can play this money game. But labor groups are at a distinct disadvantage in the cash fight. To put it in perspective, total revenue for all labor unions in 2013 was $20.8 billion. But total corporate profits from just the fourth quarter of 2013 were $1.9 trillion. According to the Center for Responsive Politics, business interests dominate organized labor by about 15-to-1. So, clearly, unions have a fraction of Big Business’ political power.

But unions have far more disclosure requirements. They must reveal their political spending, both direct and indirect, every year, for federal, state and local elections. Businesses, on the other hand, must reveal only political ad spending for federal candidates––not state or local ones. If a union fails to report its activity, it faces criminal penalties. Not so for corporations. Unions have to reveal their political spending to the public; businesses don’t. In fact, big business is allowed to secretly funnel as much dark money as it wants through 501(c) groups, 527s, and newly formed “social welfare” groups that often act as corporate fronts.

In other words, it’s impossible to know who is stuffing slick fliers into your mailbox and sending strangers to your door on weekends.

Earlier this month, there were a record number of anti-fracking measures on ballots across the country, according to InsideClimate News. They were in four Ohio towns; in Denton, Texas; and in Santa Barbara, San Benito and Mendocino counties in California. Considering that California was the third-highest crude oil-producing state in 2013, interest in its anti-fracking initiatives extended far beyond state lines.

An expensive battle was fought here, in Santa Barbara, over Measure P, which would have banned fracking. The measure was seen as a litmus test, since Santa Barbara rose to national prominence in 1969 after a massive offshore oil rig blew and spilled into the ocean. For eight days, 100,000 barrels of a dark oleaginous substance leaked into hundreds of square miles of water, tarring 100 miles of coastline and killing thousands of fish and fowl. The tragedy drew network news cameras that showed graphic images of oil-caked pelicans and dead otters. “It was heartbreaking,” said activist Pat Robertson. The national outcry spawned the birth of the Environmental Protection Agency, the Clean Water Act and the modern-day environmental movement.

So, the passage of an anti-fracking law in the birthplace of the environmental movement seemed like a slam dunk. Yet, international oil giants funneled money into a misleading anti-Measure P effort, according to Lauren Hanson, vice president of the Goleta Water Board. And the measure failed.

At least we know why, thanks to California's solid political cash disclosure law. Now, voters everywhere are rising up to urge their state legislatures to follow suit so they can learn who’s stuffing their ballot boxes, metaphorically speaking. What if Washington, D.C., adopted a comprehensive disclosure law? In 2010, Congress came within one vote of overcoming a party-line filibuster to pass the DISCLOSE Act. Since then, the need for improved transparency has only grown more urgent and it’d be nice if the Republican Congress would adopt a donor ID law. (Don’t hold your breath, said Demos'Liz Kennedy.)

Better to lay your bet on the Securities and Exchange Commission, which is supposed to protect shareholders and the “integrity of the markets.” It could issue a rule requiring publicly traded corporations to disclose political spending to shareholders. Consumers, investors and citizens have a right to know how a public corporation is spending money so they can decide whom to patronize and where to invest. Does a company’s stated mission match its political spending? Does its public “brand” align with its backroom brawn?

Already, some investors are demanding just this type of data. John Bogle, founder and former CEO of Vanguard, has called for greater regulation of corporate political spending, saying “it’s time to stand up to the Supreme Court’s misguided decision [and] to bring democracy to corporate governance.”

Or maybe the taxman could help. The Internal Revenue Code does not require nonprofits organized under section 501(c)4 or 501(c)(6) to disclose their donors to the public. Yet, the Bipartisan Campaign Reform Act calls for exactly those groups to disclose their donors when they run “issue ads” that mention a candidate. Confusing? You bet! The law and the code don’t match up and things get even muddier when you factor in other federal agencies. As this chart demonstrates, the tangled web of campaign finance is enough to give even an offshore banker a migraine.

But to effectively monitor such rules, Congress needs to restore funding and staffing to the IRS, which has been slowly cut to the bone in the past two decades -- at the same time that the nonprofits it regulates have soared. That’s allowed corporate welfare groups and super PACs to drive 150 mph in places where the posted speed limit is 45. The IRS could clarify the definition of political “activity” for nonprofits, set clear limits and make enforcement easier against those trying to game the system. In fact, stricter enforcement could drive dark money into the light by making registration of nonprofits as 527 groups – which do disclose their donors – a more attractive option.

As it is, the IRS is expected to release some such rules in early 2015, in time for the fifth anniversary of Citizens United.

Voters in county, state and federal elections have a right to know who is polluting their water, suppressing their votes and buying their senators. That’s the kind of knowledge Americans possessed in the Roaring '20s, when the University Club opened its doors to corporate trustees, cattle ranchers and East Coast magnates who summered here. It may have been a time of freewheeling industry captains, no labor laws, few federal regulations and no IRS, when private men exploited the public good as a matter of course. In 1923 -- the same year that this club opened -- the Teapot Dome Scandal was brewing. U.S. Secretary of the Interior Albert Fall was secretly leasing public oil reserves here in the West to a private oilman in return for what today would be millions of dollars in no-interest loans. The Teapot Dome Scandal revealed a trail of greasy corruption engineered by Southern California oil barons such as Henry Sinclair and Edward Doheny. Eventually, the shameful incident put the first former U.S. Cabinet official into prison and went on to serve as a template for investigating another dirty money scheme, Watergate.

And what kind of scandal will Citizens United bring us? “People ask me that all the time,” said Kennedy. But the real scandal is what is considered legal today in this country. In other words, it’s easier for a corporation to buy a U.S. election than it is for an American citizen to vote.